As part of our UK tour, we stayed a few days in Edinburgh, Scotland. In addition to enjoying Edinburgh’s old town, we took a mini-excursion out into the foothills, and we visited Stirling Castle. So sit back, relax, and enjoy the tour!

This was our second trip to Edinburgh, and it was just as much fun the second time around. The great thing about Edinburgh’s old town is that it is basically a single street that curves up and around the rocky hill and ends at the top, right into Edinburgh Castle.

That road, flanked by high walls, is the only permitted access to the castle. The rest of the castle is surrounded by cliffs, as you can see above. The rock upon which the castle is built is known as Castle Rock. It affords a beautiful and strategic view of the city and beyond. 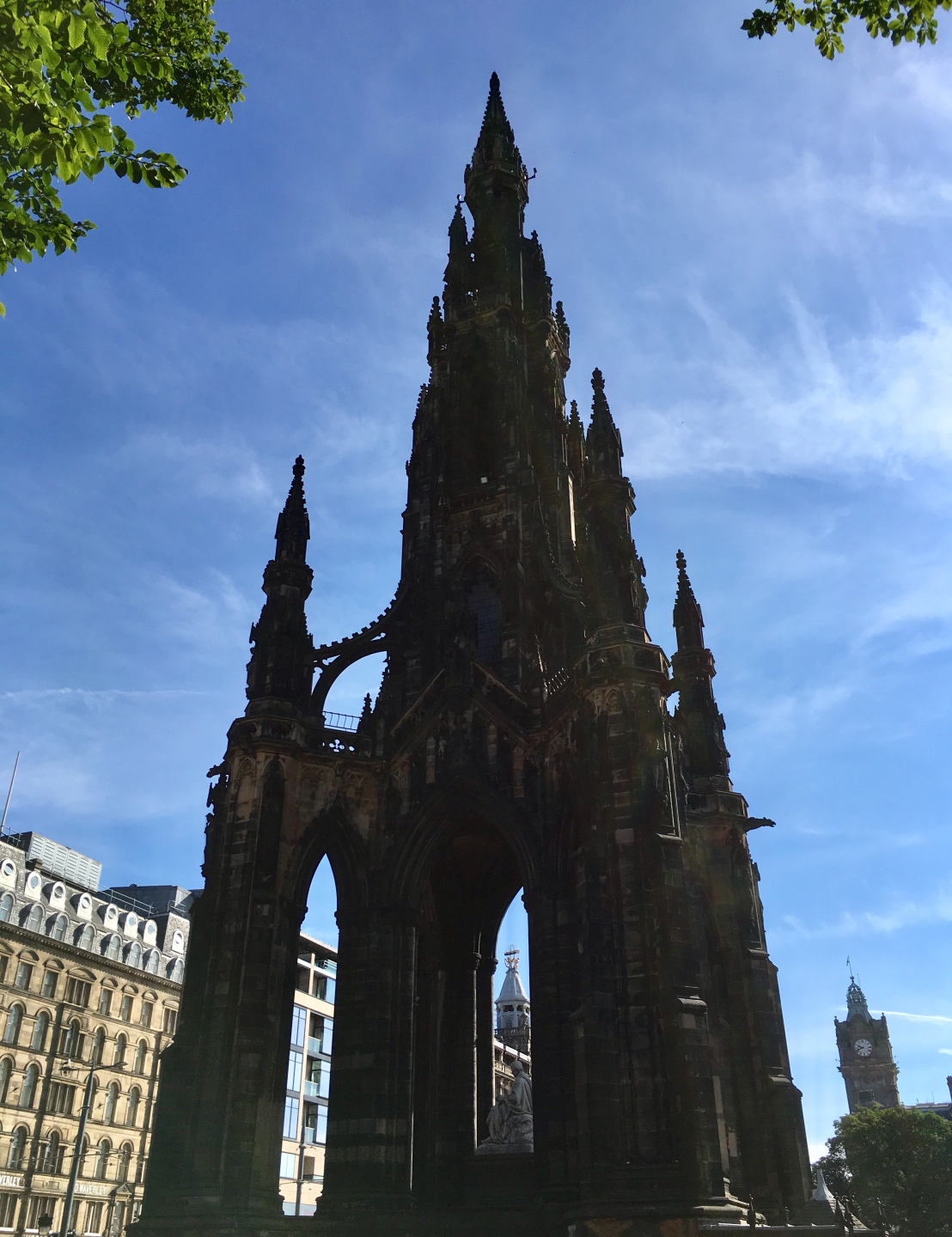 Edinburgh Castle wasn’t just some party palace for aristocrats. This is the formal definition of a war castle. It was besieged twenty-six times in its 1100 year history. This is one of the most attacked castles in the world. Was it ever lost? The answer is yes, but it was often under dramatic circumstances, Hollywood style! One instance was in 1314. A Scottish soldier had knowledge of a dangerous path up the cliffs and over the walls. The soldiers braved the treacherous climb, scaled the walls, surprised the garrison and took control of the castle.

Another dramatic attack was in 1341. A team of Scottish soldiers disguised themselves as merchants. When their cart was just under the gates, they stopped, preventing the gates from closing. Their main force was hidden nearby and stormed the castle.

Cool stuff! But the thing is, while visiting Edinburgh’s old town, you definitely get a feel for the old days. It’s as if you can sense the ghosts of the soldiers walking up and down the streets.

Underneath the old town is an even older town! It is a complete underground city where they kept all the people who had the plague. We didn’t go there this time, but we did visit it last time we there and I highly recommend doing this if you’re in Edinburgh. Very creepy. 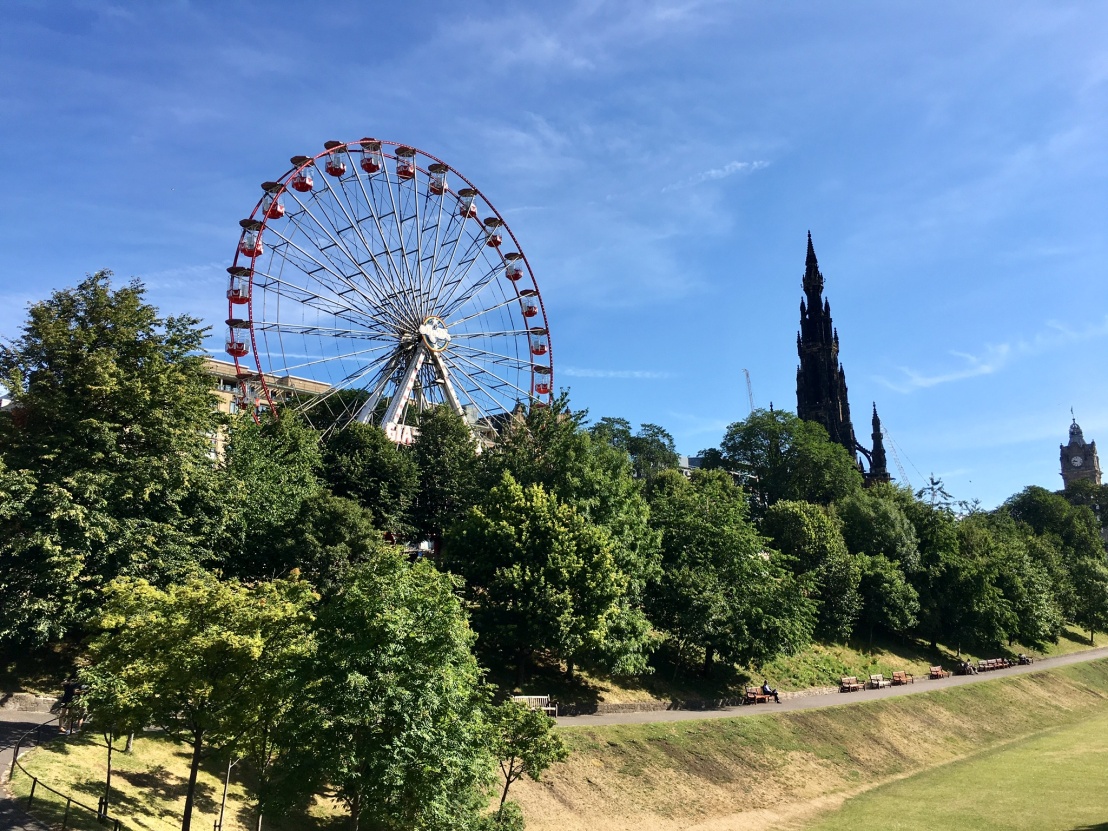 Just a ton of great things to do in this cool town. They even have their own giant Ferris wheel. I would rank Edinburgh as one of my top five cities that I have ever visited.

The Palace of Holyroodhouse

Well, if you missed your chance to see the Queen while at Buckingham Palace, then you have another chance here. This is the official residence of Queen Elizabeth II. Which means this is her digs when she’s in Edinburgh. It is definitely a working palace and the sight of many historic events. It is commonly known as the Holyrood Palace. No pictures were allowed inside, but I wanted to share a couple of pics I got while on the grounds: 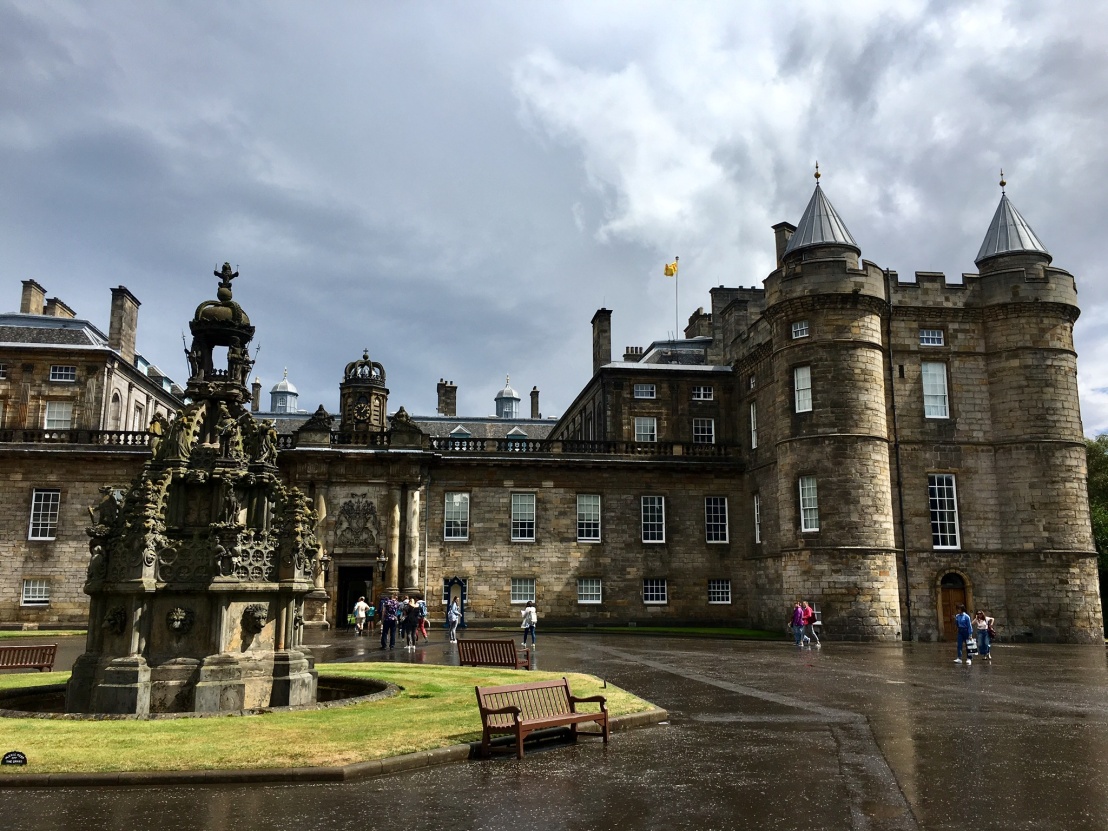 This picture, above, is the main entrance and courtyard.

The grounds around this palace are just spectacular. A thousand times better than even Buckingham, in my opinion. 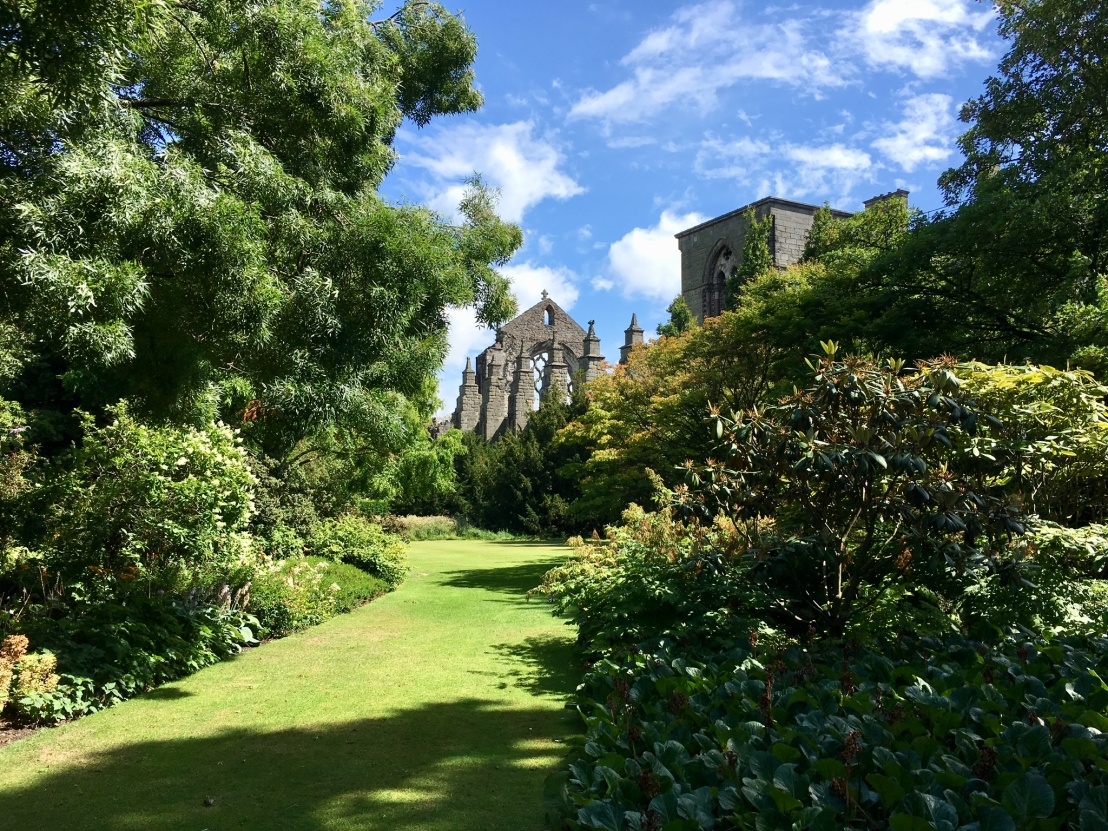 Nestled out in the gardens is a magnificent and awe inspiring ancient abbey. 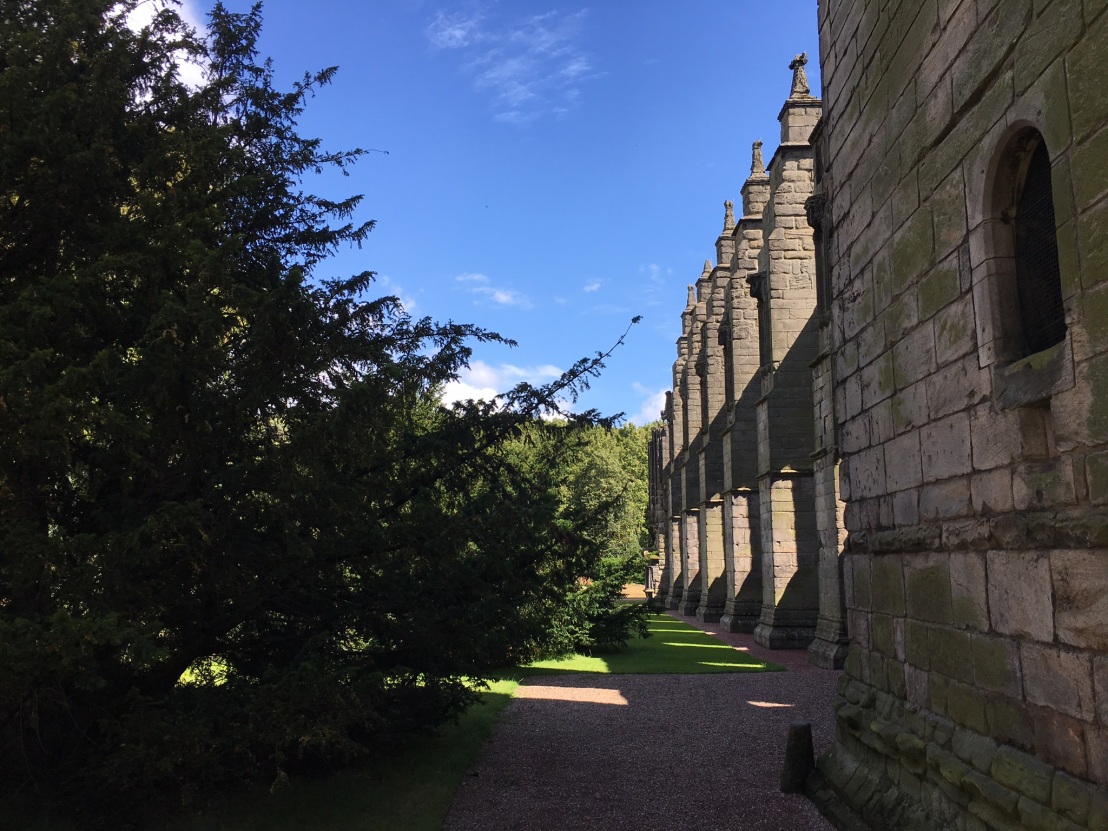 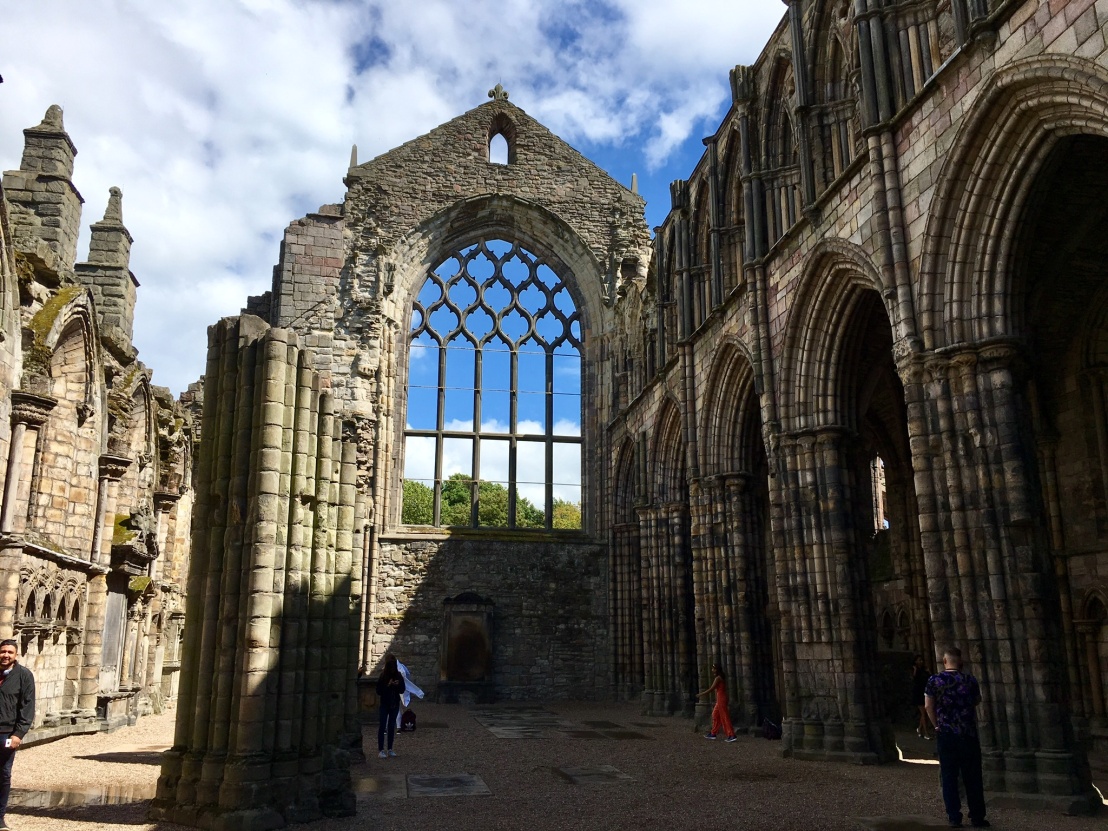 Definitely worth going to this palace if nothing else than to enjoy the grounds around it.

While staying in Edinburgh, we took a trip out to the coast. We went to the Scottish Seabird Centre in North Berwick. They had a really cool museum presentation that included interactive camera controls so that you could see what was happening on Bird Island. Ok, the name of the island is Bass Island, but they need to rename it Bird Island. Here’s why:

See that island up there? The top of it is NOT white. Those are birds! Here, a picture is worth a thousand birds – note that each successive picture below gets closer to the island. No other words are needed:

It was just one of those things in nature that just makes you go, “Wow, where’s my hat….”

I have to stop at this point and hang my head in shame. We did something very, no extremely “touristy”. Ok, here it goes… we rode the big orange gaudy Hairy Coo Tourist bus! 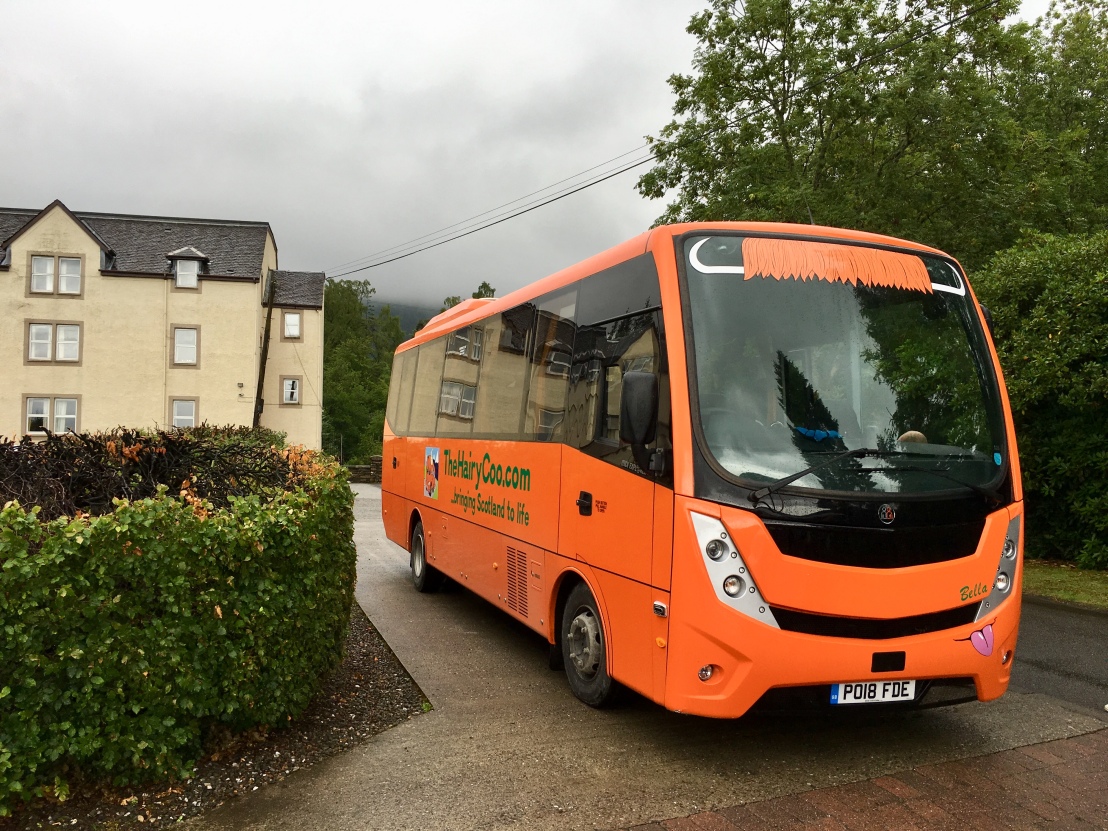 Now I could have just as easily NOT told you about it and you would have never known. But in all honesty, it was a pretty decent tour. It hit some major highlights between Edinburgh and the foothills of the Scottish highlands.

The remaining sections of this article were done as part of the tour. It was pretty massive, so grab a tankard and kick back for a bit.

Scottish word Kelpie: “A kelpie is a shape-changing aquatic spirit of Scottish legend. Its name may derive from the Scottish Gaelic words ‘cailpeach’ or ‘colpach’, meaning heifer or colt. Kelpies are said to haunt rivers and streams, usually in the shape of a horse.”

On our way out to Stirling Castle, we took a little detour to see this majestic and artistic statue called The Kelpies. Magnificent presentation. They glimmer in the sunlight and are 30m (100ft) tall. 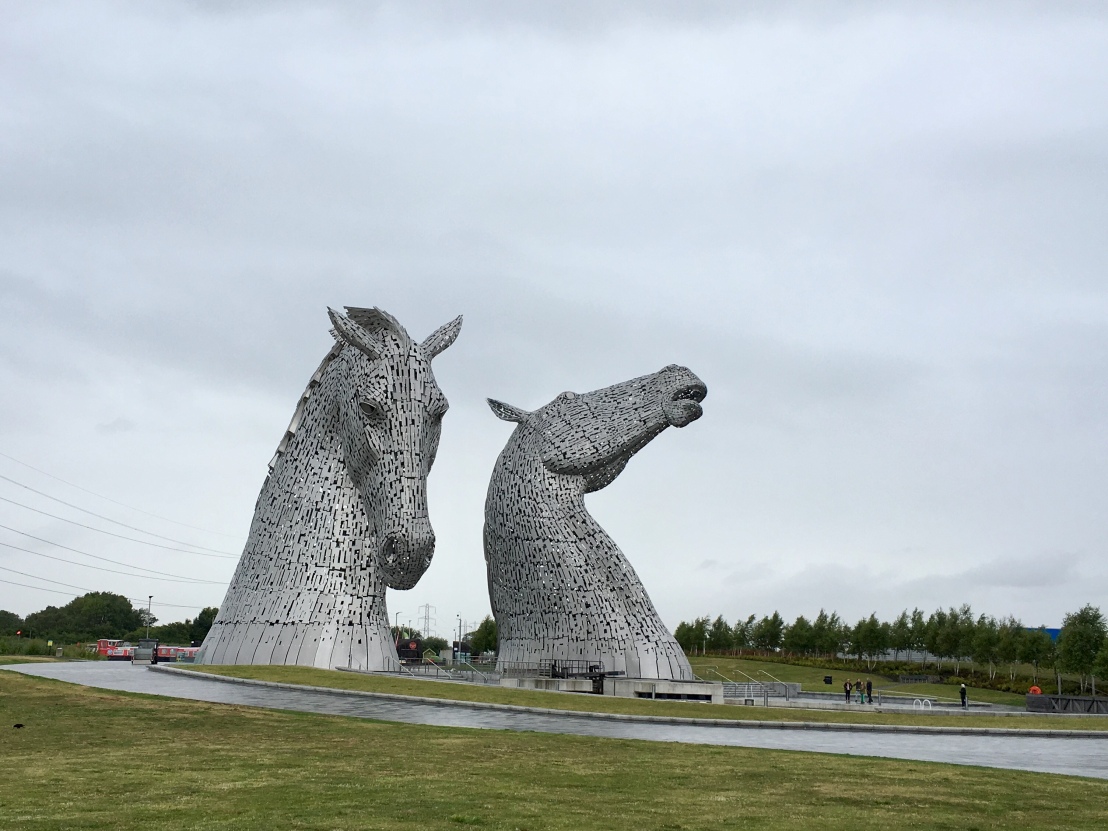 It was definitely worth a small detour to see this. 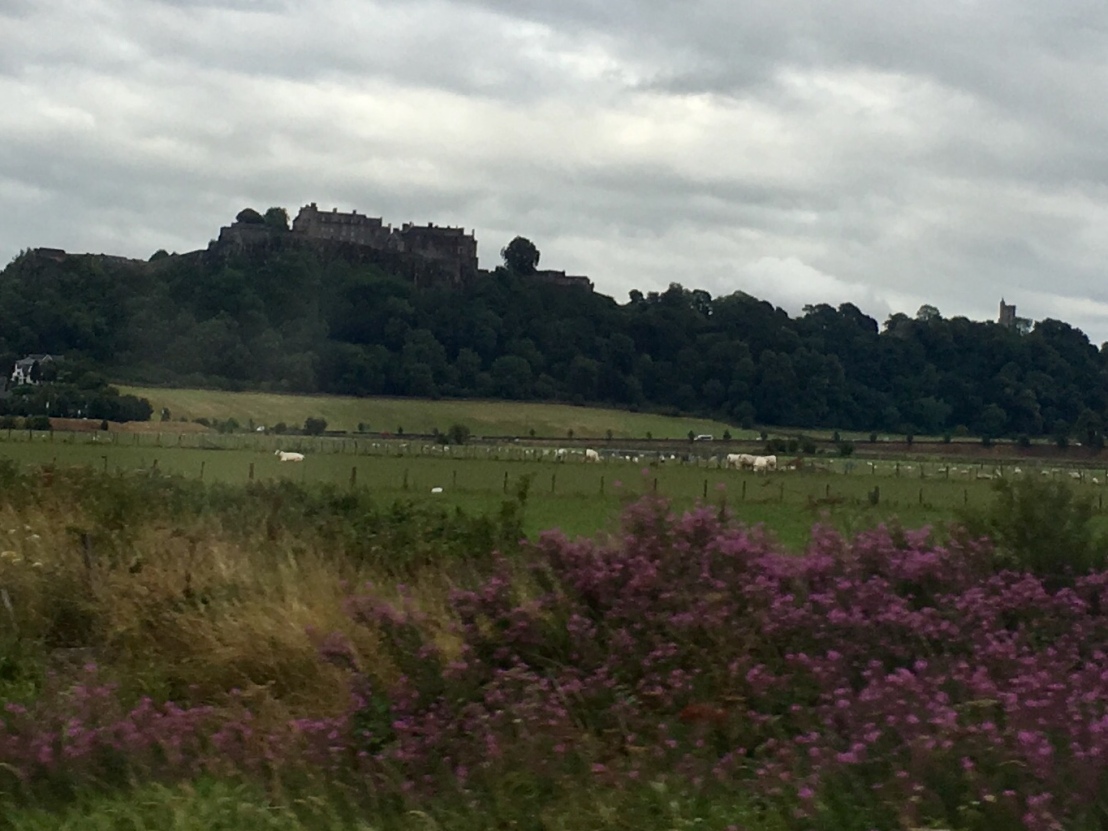 This is a fantastic, classic medieval Scottish castle. Much like Edinburgh Castle, it sits atop a huge intrusive crag. Up until late in the 19th century, it was of utmost strategic value since it protected what was, until the 1890s, the farthest downstream crossing of the River Forth.

Everything is well presented, inside and out. We did the audio tour and it was great. Tons of history inside these walls.

If you look closely there, off in the fog, you can see a tower on a hill. See it there? That is the tower that commemorates none other than William Wallace himself. It was here where he and Andrew Moray fought the Battle of Stirling Bridge against the English. After losing the battle, the English commanders retreated into the castle, but they were quickly starved out by the Scots. 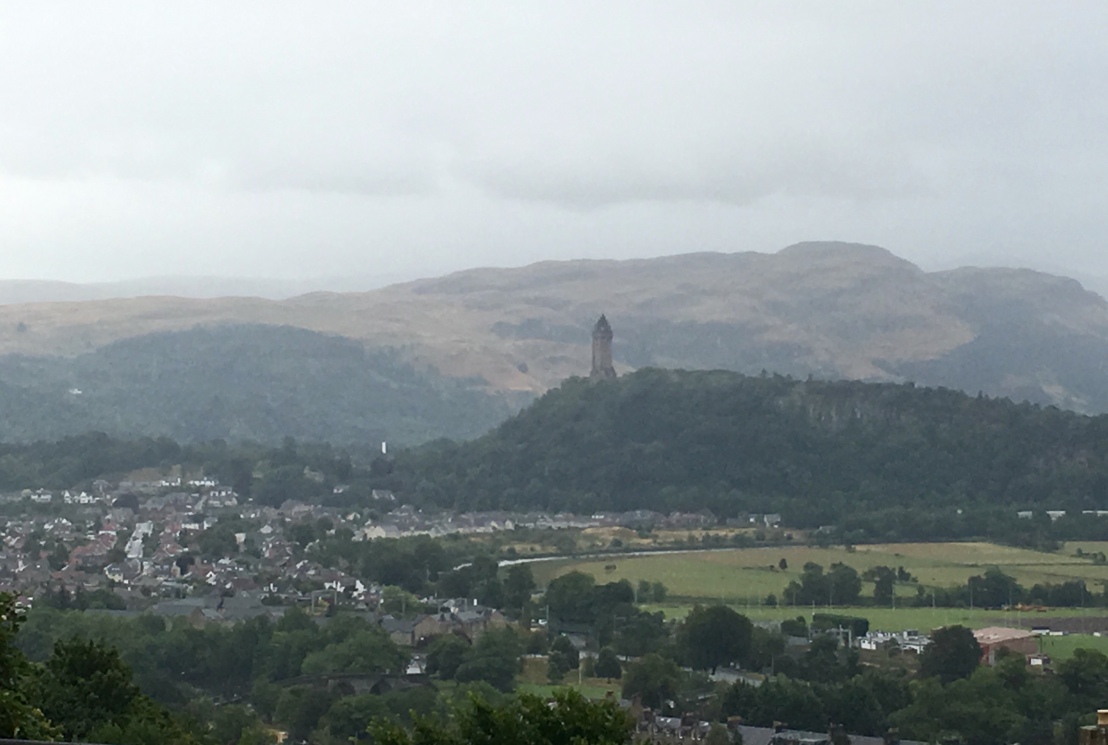 Some of the fog had burned off by the time we left. Here is another picture of the tower (above). You can visit the tower. It’s a strenuous walk up the hill, then an even more strenuous climb up hundreds of treacherous stairs to the top. But it’s definitely worth every drop of sweat to see the actual sword wielded by William Wallace. We didn’t go up this time, but we did it last time we were here.

The grounds and views around the castle are breathtaking. Unfortunately, it was raining and foggy while were there. But even that can’t mar the majestic beauty around this historic castle.

No real tour of Scotland would be complete without a tour of a scotch distillery. After Stirling Castle, we made a stop at the Deanston Distillery for a quick tour and a tasting. 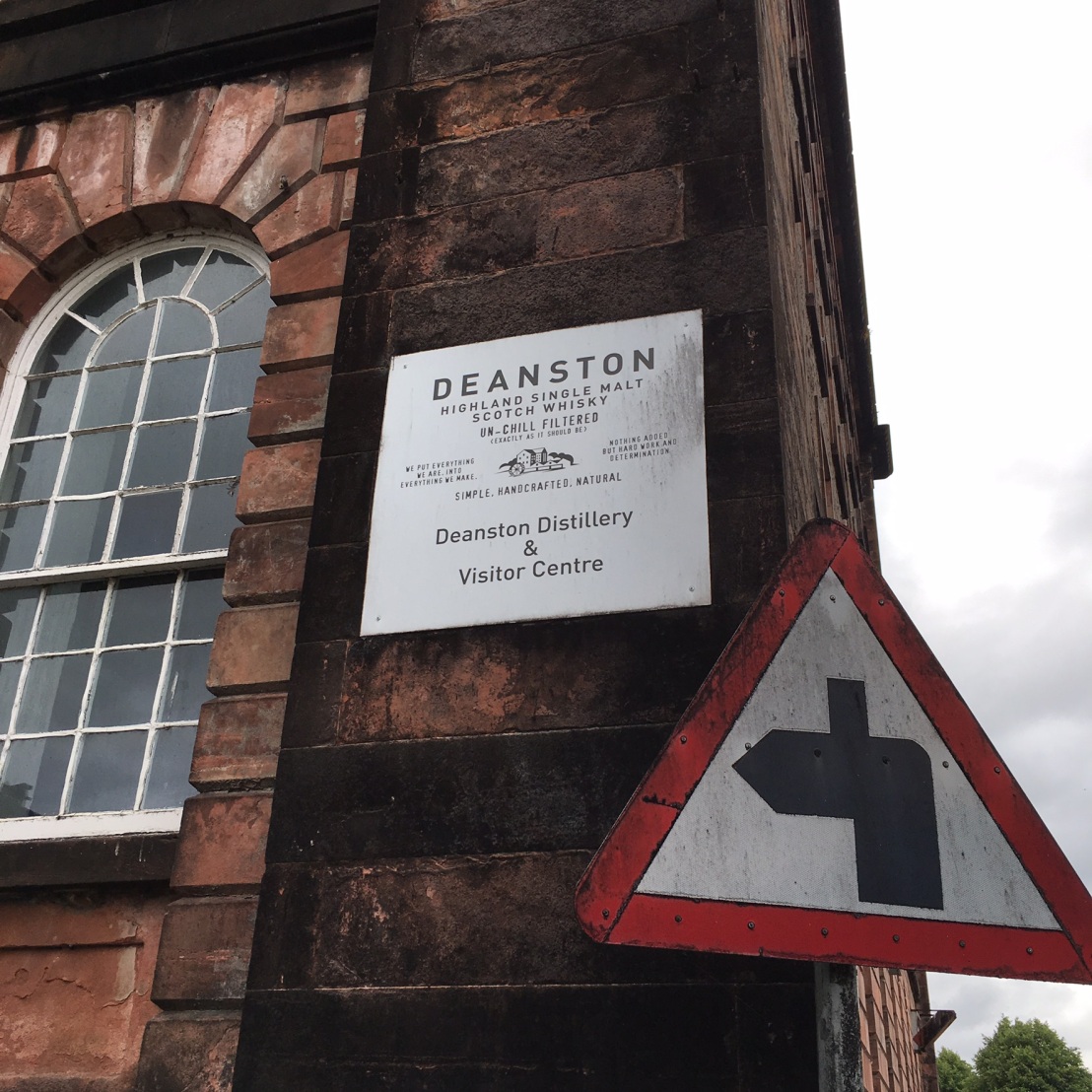 And of course we got to see some actual hairy coos! Native to Scotland, they are basically cows with long hair and a thick undercoat to keep them warm in the highlands. The world is just fascinated with these cows. Bred specifically for Scotland, they have since been exported to other countries. 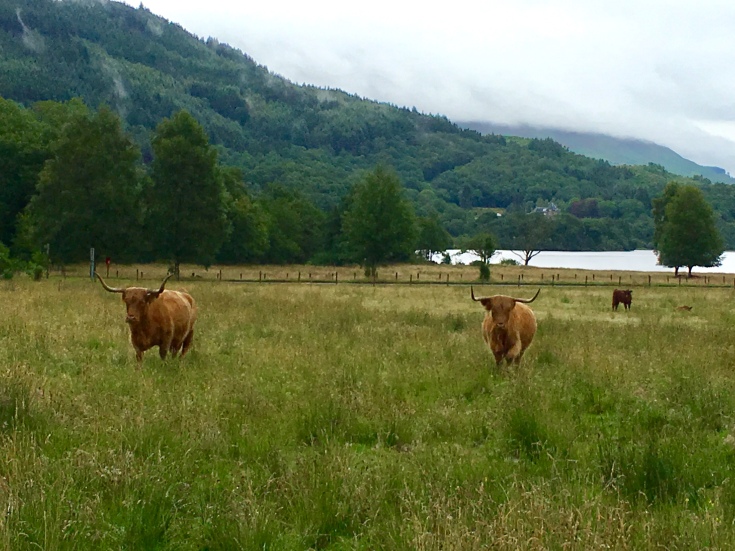 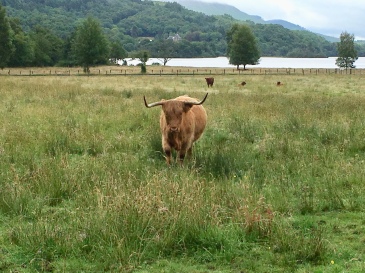 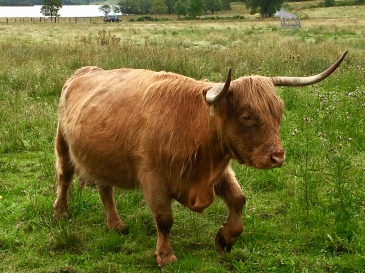 Our tour guide not only stopped and let us out to see them, but also gave us some carrots. For the coos.

And so concludes our tour and our wonderful time in Edinburgh. We did a lot of things while we were there, and I shared the major things we did. It’s an awesome place, we loved it as much this time as we did last, and we will be back again.

(now you see why I was embarrassed about the bus – haha)