This is the beginning of our Great Irish Road Trip! We will be spending a day in Dublin, then we’ll rent a care and head out into the wilds of Ireland covering nearly a thousand miles! So watch for more updates from the backroads of the Irish countryside!

And before we begin, there is one note I would like to mention. More like an advance apology. The Travelin’ Man is published on my own private server, but I use WordPress as a content manager. I am writing the Ireland series on a new and radically different tool. This should allow me to write the articles even while offline, and it should be transparent to you. But you know how these things usually go, so if there is any weirdness, etc, thanks in advance for being patient.

Without further ado, Jana and I arrived in Dublin and met our friend, Brandie, at the hotel. Brandie hails from Atlanta, Georgia in the US. Last summer, she came out and visited us in Sweden, where we had a rockin’ time!

We didn’t spend a lot of time in Dublin but we did manage to hit a couple of good spots before moving on to see the rest of Ireland.

As we approached the river, we saw there was a large gathering of people all blobbed up on the bridge. I was pretty sure they weren’t there to see The Travelin’ Man since I hadn’t called ahead to let the authorities know I would be in town.

We muscled our way into the throng of people and saw it was an Iron Man contest in progress. Which was a relief, because I hadn’t brought a pen with me to sign autographs.

It would be a sin to come to Dublin and NOT see Saint Patrick’s cathedral. You know, the guy that makes everyone wear green once a year…yeah THAT Saint Patrick.

We spent some time exploring the archives of the Book of Kells at Trinity college. Fascinating how far back these documents go, and that they were able to preserve them through the ages. Makes me wonder, in our modern age where so much documentation is digital, how are we preserving this for the ages to come? If apocalypse hit and the power grid is destroyed, how will people a hundred years later know about The Travelin’ Man? 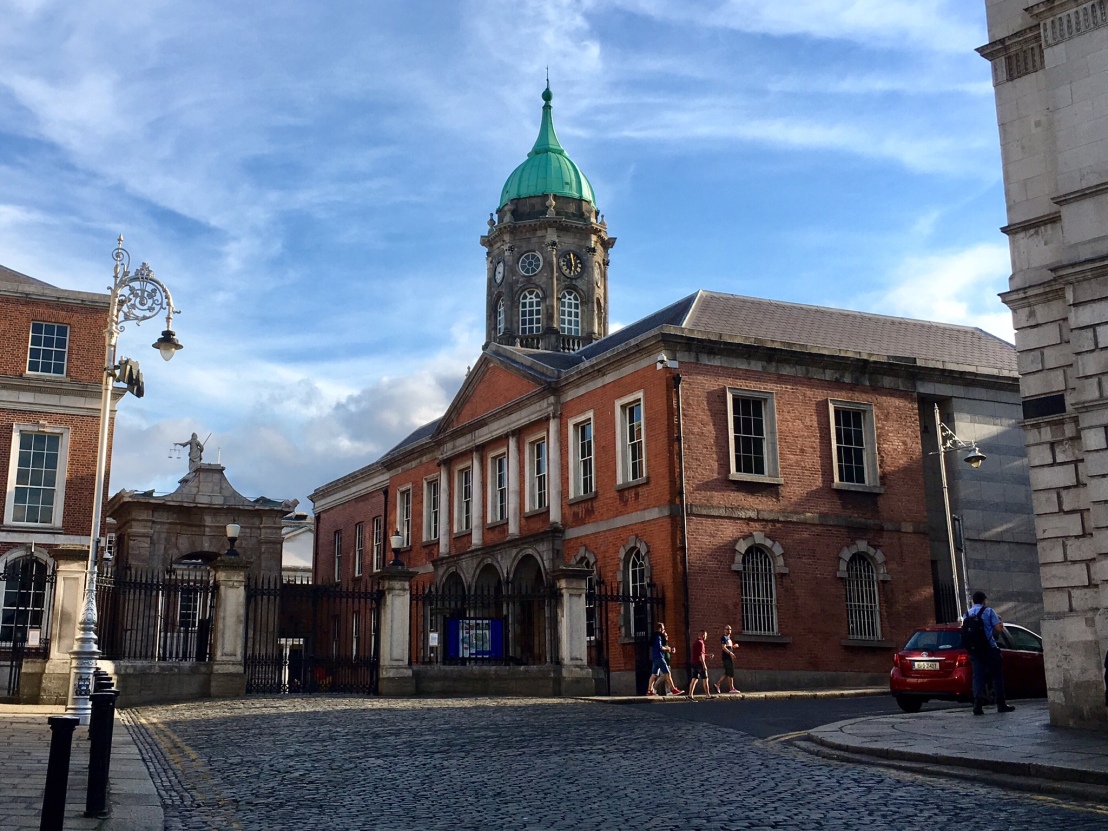 We went by the capital. You know, after the scare at the bridge, I thought we should check in and let them know we were here. But it was Saturday and they didn’t seem to motivated to call anyone up.

But that’s okay, evening was setting in, and we would be leaving in the morning anyway. So now we find ourselves scouting out a good pub. We went by the famous Temple Bar and, OMG, I never saw so many people crammed in and around a bar in all my life.

The world renowned pubs of Ireland did not disappoint. Places like this, above, are everywhere! We ended up at a really cool place called The Lotts. These guys have a whole new angle on cooking and eating a steak.

They heat up this special black stone, I mean it is really hot. The steak is put onto the fiery hot stone and brought out to you as it sizzles. You continue to cook it while also eating it! Literally eating it right off the grill. Yup, that’s two thumbs up from the Travelin’ Man! And great pic Brandie! It was a fabulous meal – if you like steaks, do not miss this this place while you’re in Dublin.

Dublin is a fast moving, modern city loaded with culture, beauty, history, shopping, and of course those marvelous Irish pubs! We had a great time there.