Magnificent and beautiful Budapest sprawles across both sides of the Danube river. A city that overcame its dark, tortured past to become a modern showcase of European art and architecture.

It’s really two cities in one. With the completion of the amazing Chain Bridge in the late 19th century, it unified two cities, Buda and Pest, to become a major trading, cultural, and political hub called Budapest, the capital of Hungary. During that time, it was also co-capital of the Austro-Hungarian Empire. Although the monarchy was dissolved after WWI, Budapest has remained the capital of Hungary. 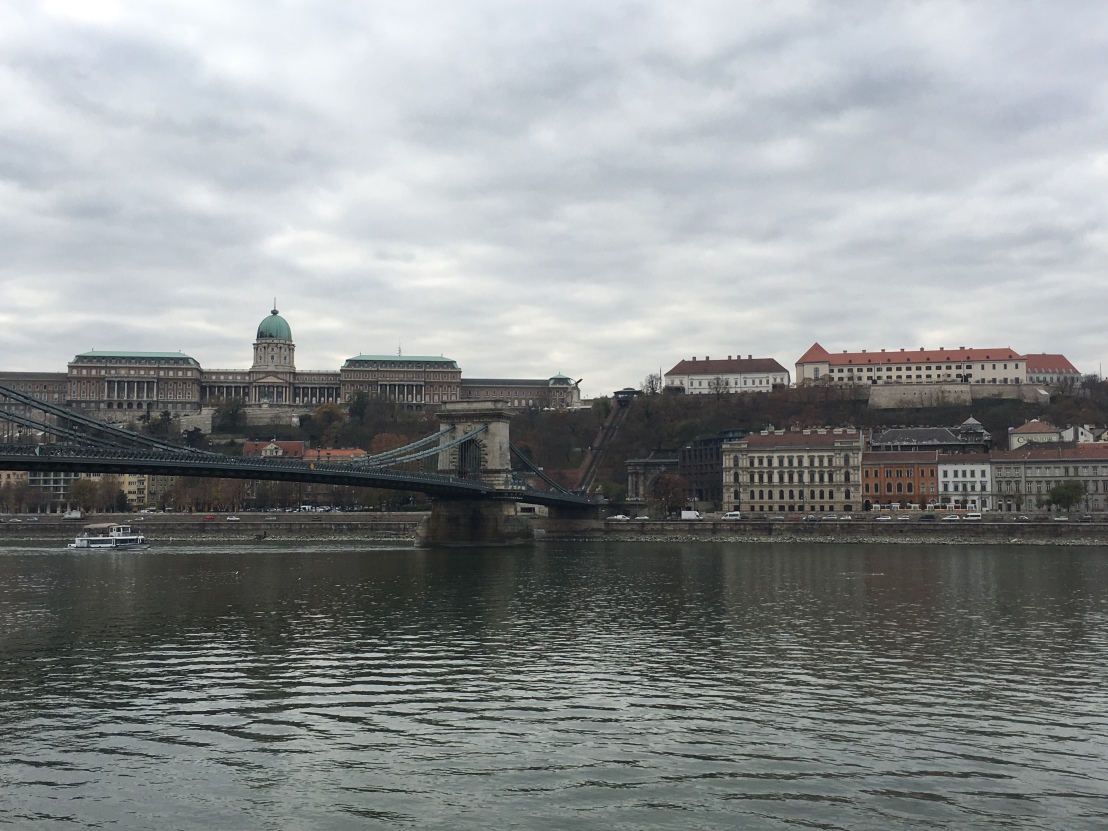 The amazing Chain Bridge, above.

Even today, each side of the river maintains its origins of the Buda side and the Pest side. The original Chain Bridge was destroyed by the Nazi’s and rebuilt around 1950.

Budapest is a great walking town. We stayed on the Buda side of the river, which is the west side, right at the base of the Chain Bridge in the Hotel Clark. So we were basically right in the heart of it all and had easy access to all major points of the city.

Jana and I arrived from Stockholm, while our friends, Brandie and her daughter, Ariana, hopped the pond from Atlanta, GA. You may remember Brandie from our now famous adventures in Ireland and Stockholm.

Here we all are, like a bunch of cave mice, squinting and blinking in the sun. From left to right, Ariana, Brandie, The Travelin’ Man, and Jana. This was taken at Heroes’ Square.

Heroes’ Square features statues of the Seven Chieftains of the Magyars and other important Hungarian national leaders, as well as the tomb of the Unknown Soldier. 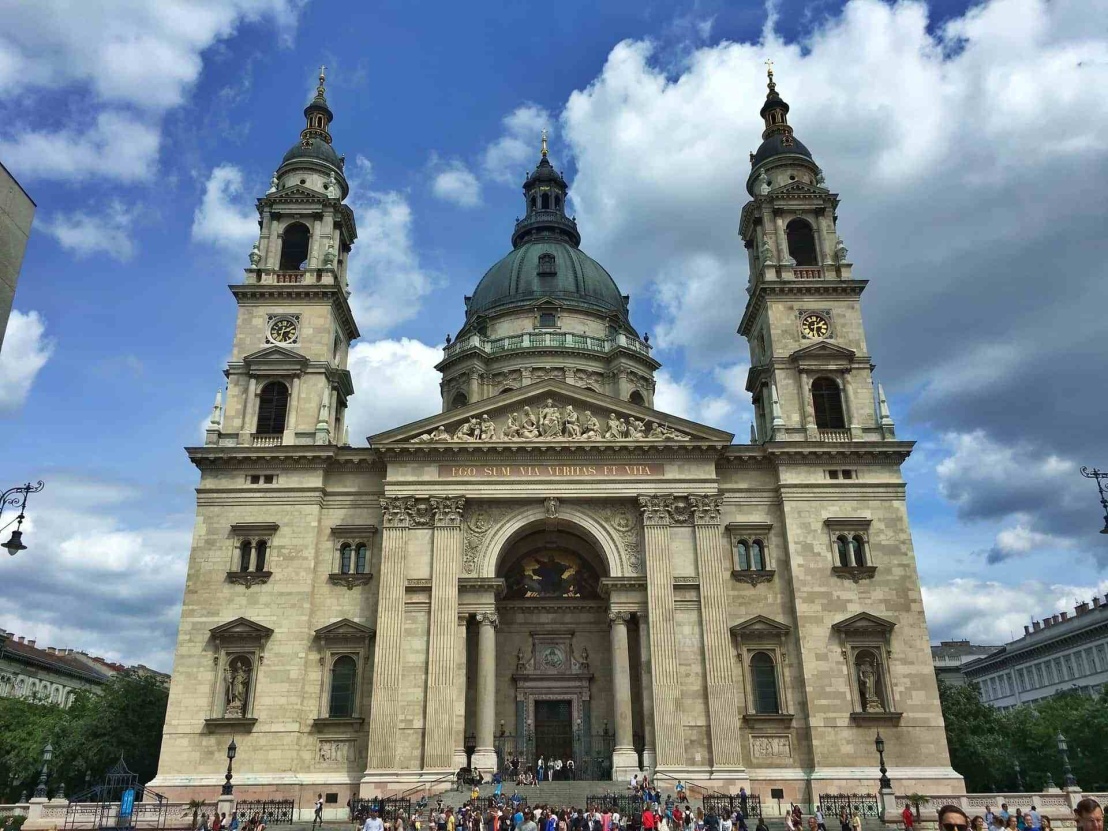 St. Stephen’s Church, above, is a Roman Catholic basilica built in 1905. It is named after the first king of Hungary. What is really special about this place is that it is located at the top of a hill (known as Castle Hill) by the river.

You can go inside the church and ride a couple of elevators then climb some stairs and get to the top, where you will see some of the most fantastic views of the city (above).

Another interesting, but creepy aspect of this place is “the hand”. That’s right, the picture above is of the mummified hand of Saint Stephen himself! Officially called the Holy Right Hand. You can see him doing the fist bump there.  A long story how it came to be separated from the king, but basically, they were moving his body at one point and noticed the right hand was somehow mummified. Of course, 980 years ago, this would imply holy and/or magical properties beyond belief, so they removed the hand. It has been a religious artifact ever since.

This city is just chock-full of magnificent architecture and beautifully landscaped parks.

The very stately Vajdahunyad Castle, above. Located in the city park of Budapest, and completed in 1896. The shiny area in front is where they are putting the final touches on an enormous ice skating rink. See below, a different angle of the castle. 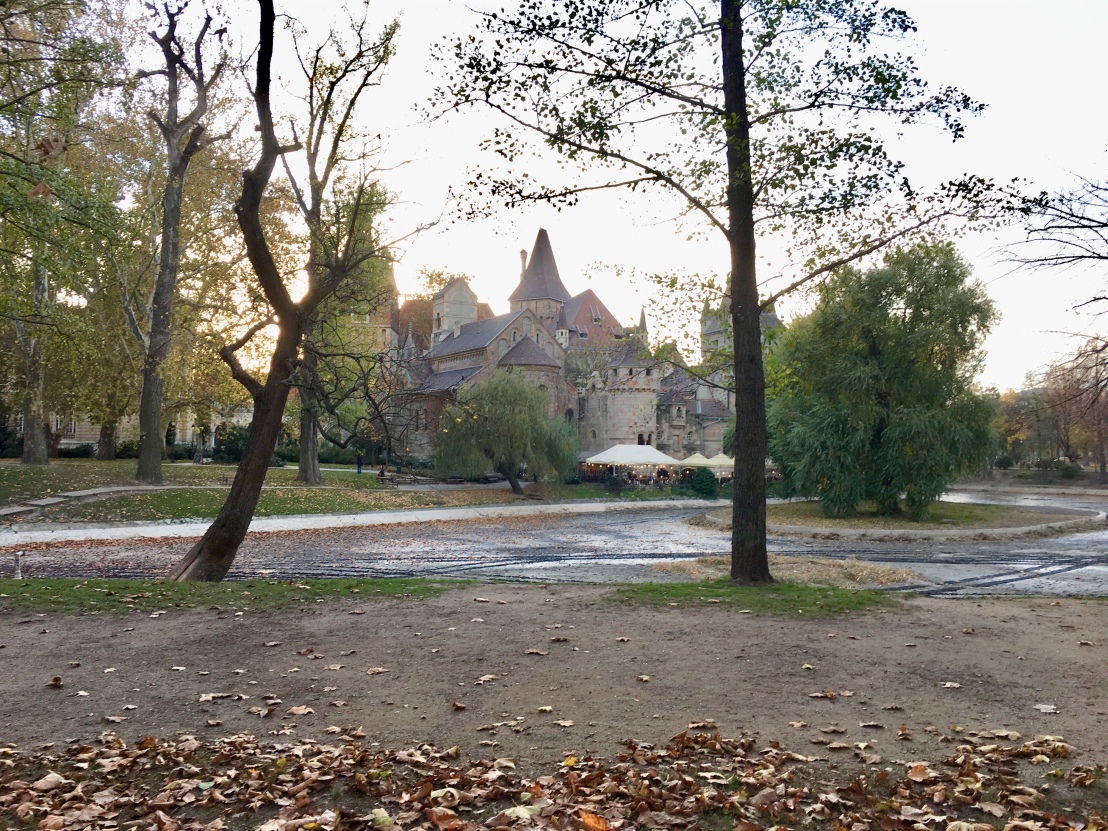 While we were out adventuring, we stopped at this excellent restaurant (below) called Anonymus Étterem. We had a great lunch, got refreshed and continued our adventure.

Just walk around here and you will realize why the whole world marks this as one of the most beautiful cities in the world. 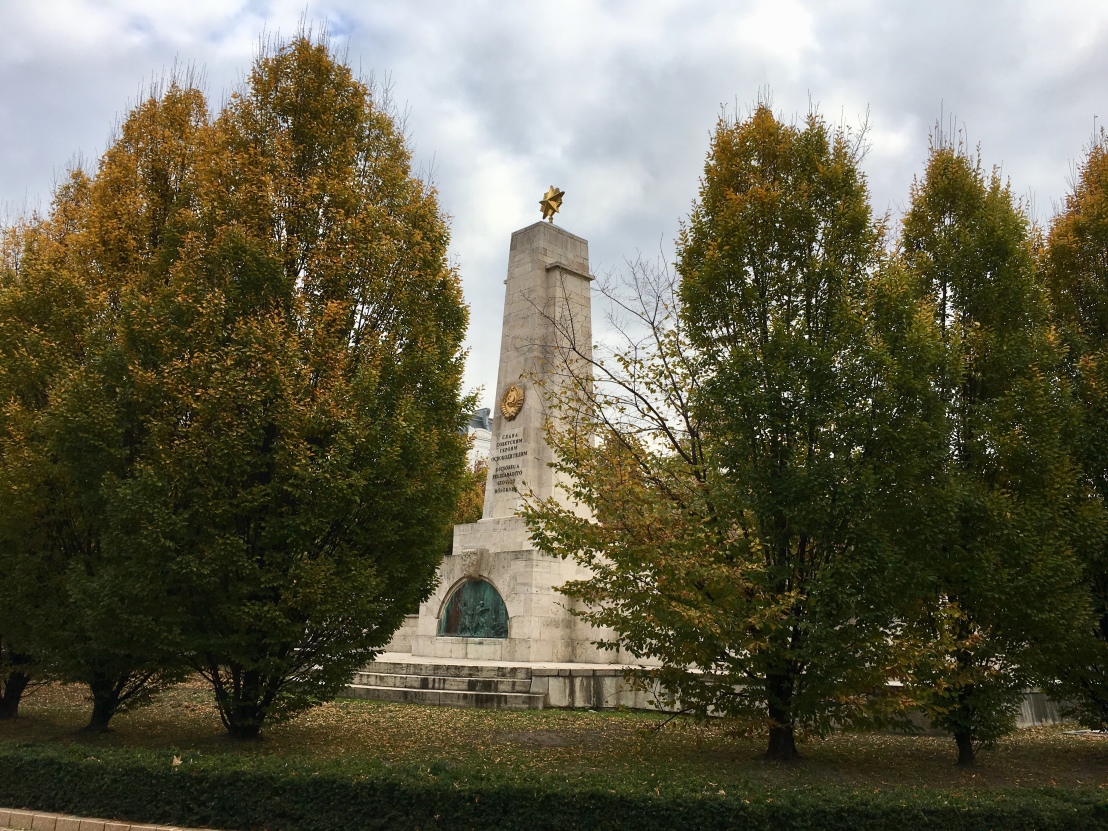 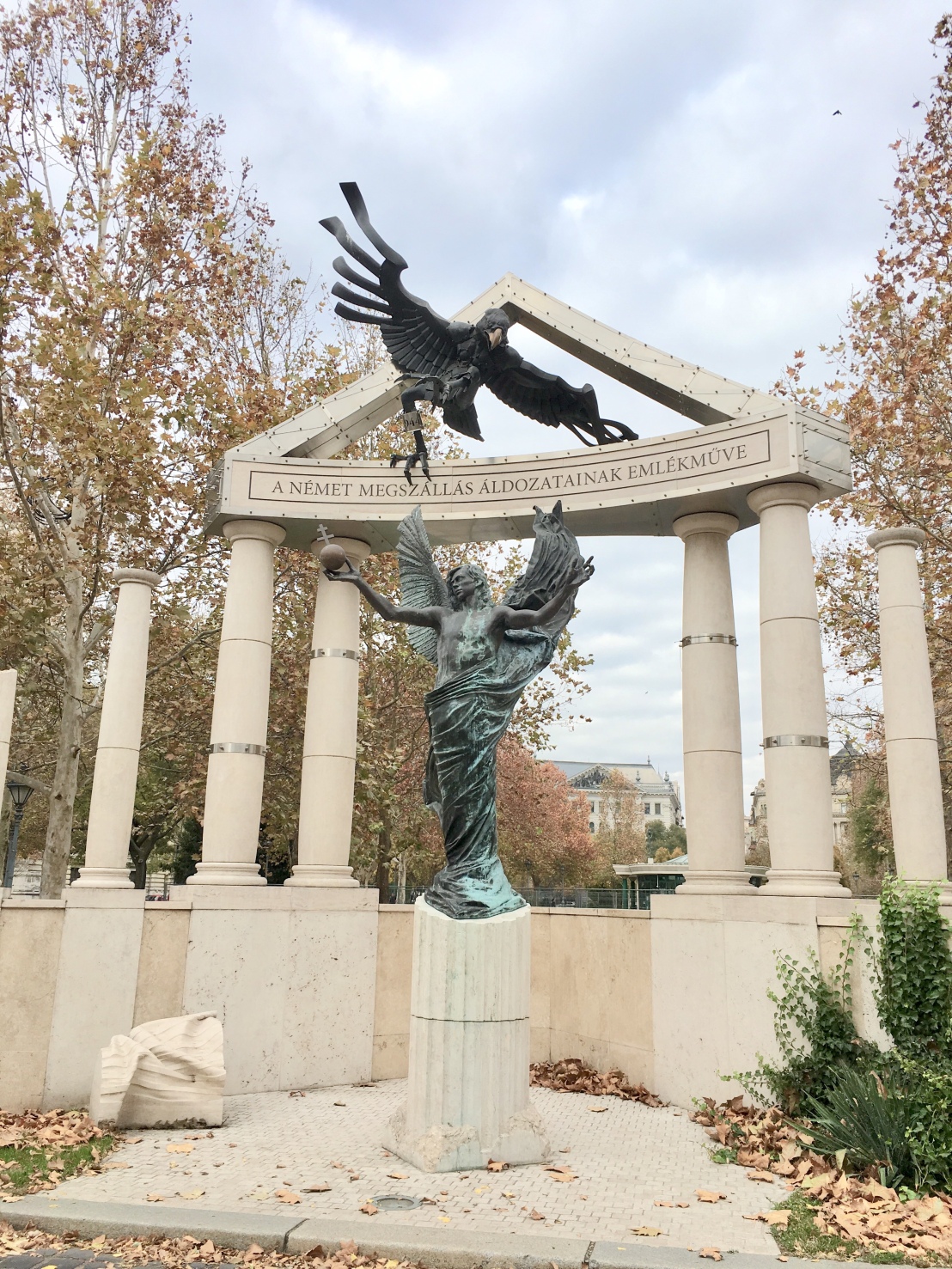 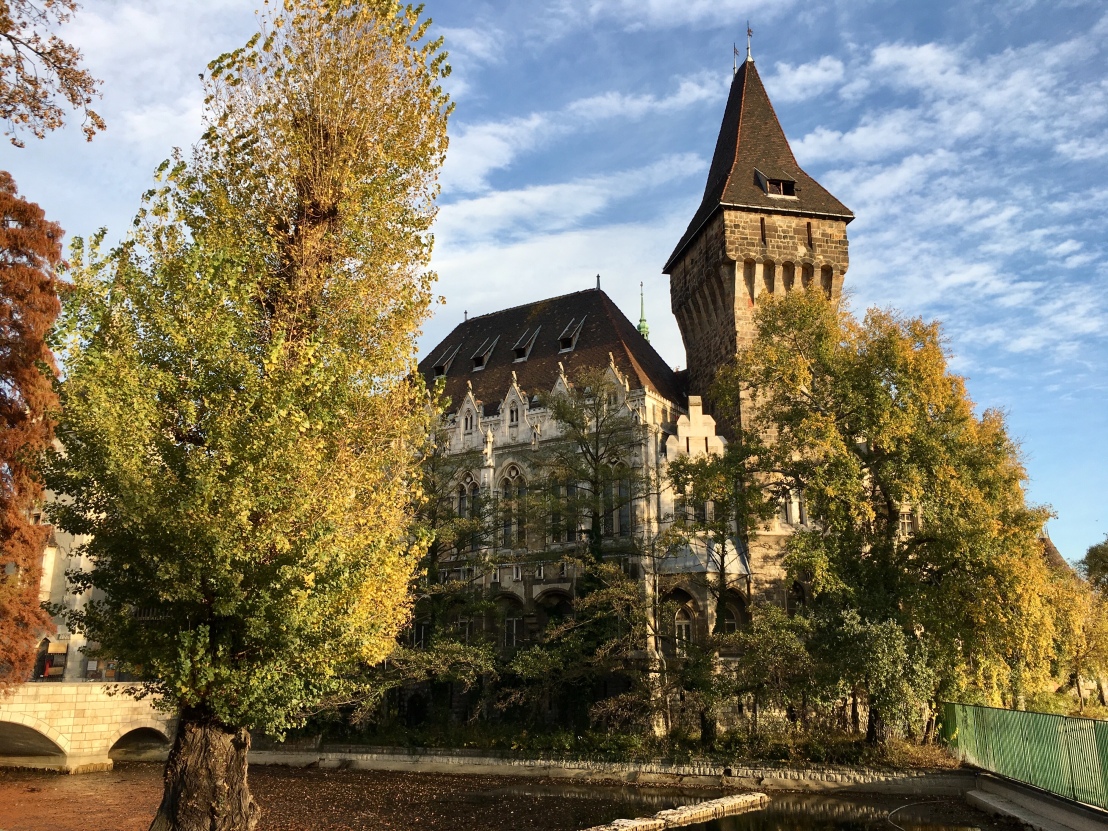 While we were there, we visited the open marketplace – fresh fruits, delicious vegetables and meats of all varieties. There were even a couple of high grade restaurants here.

And you absolutely cannot go to Budapest without visiting the world renowned thermal baths. Naturally heated and accessed for hundreds of years for both enjoyment and health benefits: 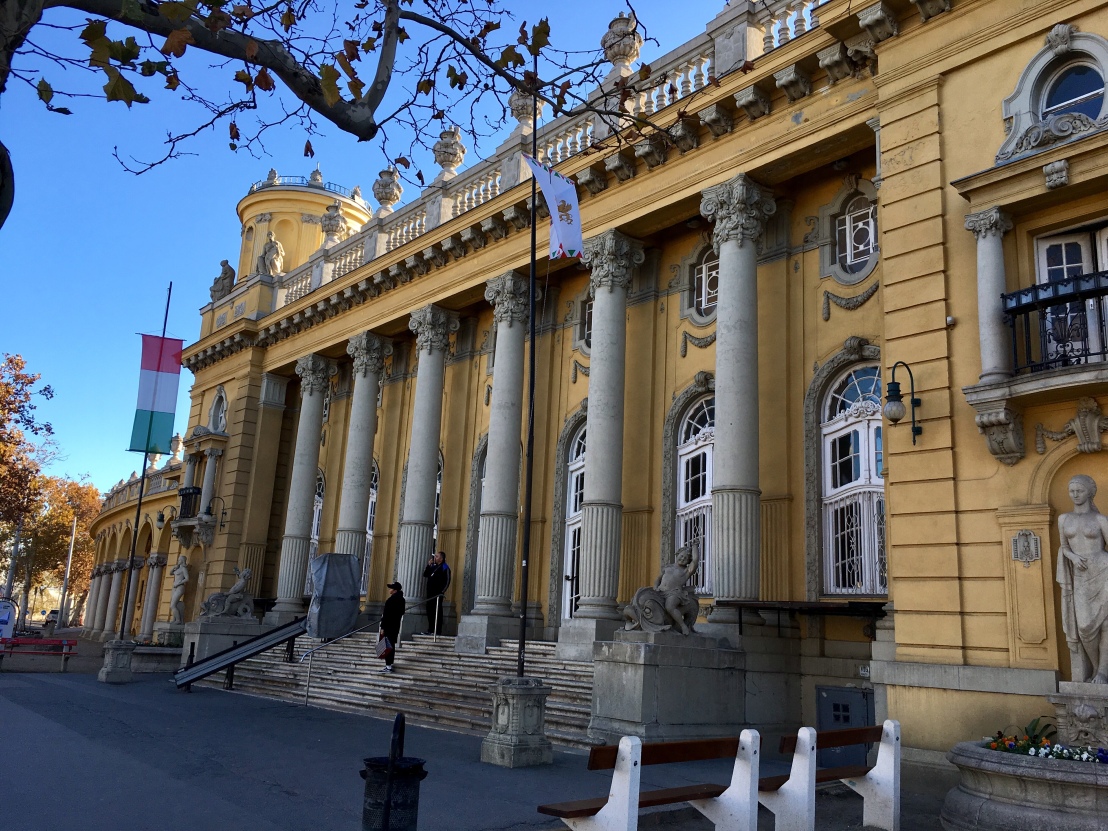 As you can see from my picture, above, the weather was absolutely gorgeous when we were there. Mind you, it was pretty cold, around 40 degrees F, but the water was so warm the it didn’t matter. However, once you step out of the pool, you are instantly aware of how cold it is, so be sure to bring or rent a robe!

And now for the pièce de résistance: the dinner cruise on the Danube. The lights of the city, especially from the water, have an undeniable magical quality…..enjoy:

This picture, above, is the breathtaking Buda palace. It was left intact by the Nazis, but it was vandalized and the inside was gutted. Years of dedicated work and patience has restored it to its full beauty. 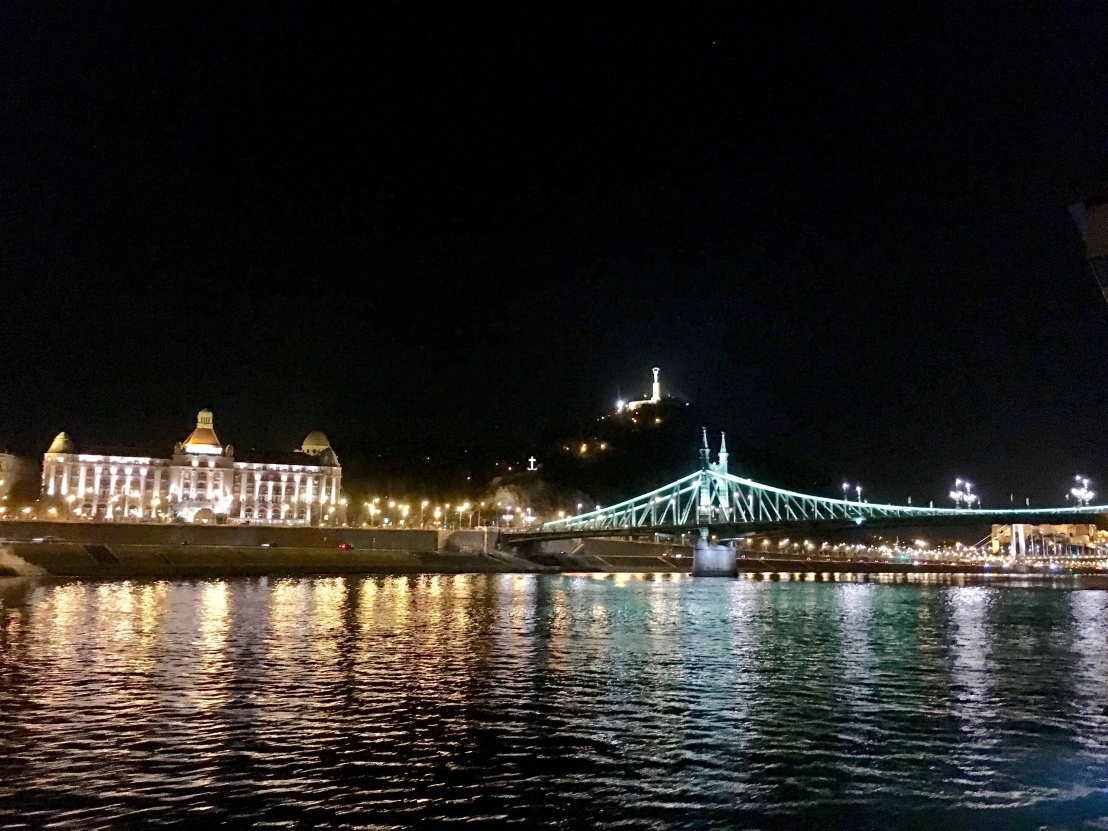 This picture, above, and the featured picture at the very top of this article is the magnificent Hungary Parliment building. Astonishing detail and beauty. You could spend years studying all of the intricate carvings on and in this building alone.

While I didn’t review any restaurants in this article, I will say something about the food overall. Being a landlocked country, they are not a fish eating population. Lots of dishes based on beef and venison. Delicious steaks, stews and goulashes are their specialty. Which suited The Travelin’ Man just fine! And the Hungarian wines are in our top three favorite wine regions.

And that was pretty much Budapest for our first visit. We will definitely be coming back here. After this, we hopped onto our riverboat for an extended cruise through Europe. I will post a link here when that article is completed. These are the good ole days!