We stayed in Saint Petersburg for a couple of days. Jana’s ability to adapt, linguistically, to most everywhere we go is phenomenal. But she felt the Russian language was just too complicated for an independent tour on our first trip. To offset this, we hired a guide to take us around and show us the sights. This turned out to be a good decision for us. But there were a lot more people that spoke English than we would have thought, so next time, we could opt to go independent if we wanted to.

This is the first Russian town (that Russia still holds) that I have ever been to. It is the second largest city in Russia (with only Moscow being bigger). It was the capital of Russia until 1918.  The capital was moved further inland to Moscow due to the looming German forces.

As with other European cities, Saint Petersburg’s history is a long, bloody tale of wars, politics, and assassinations. What I found intriguing about Saint Petersburg was the history of its name. Most people don’t realize that it used to be named Leningrad.

Another interesting tidbit on Saint Petersburg is that during WWII, the city remained under siege by German forces for two and a half years. This proved to be one of the longest, most destructive, and most lethal sieges of a major city in modern history. 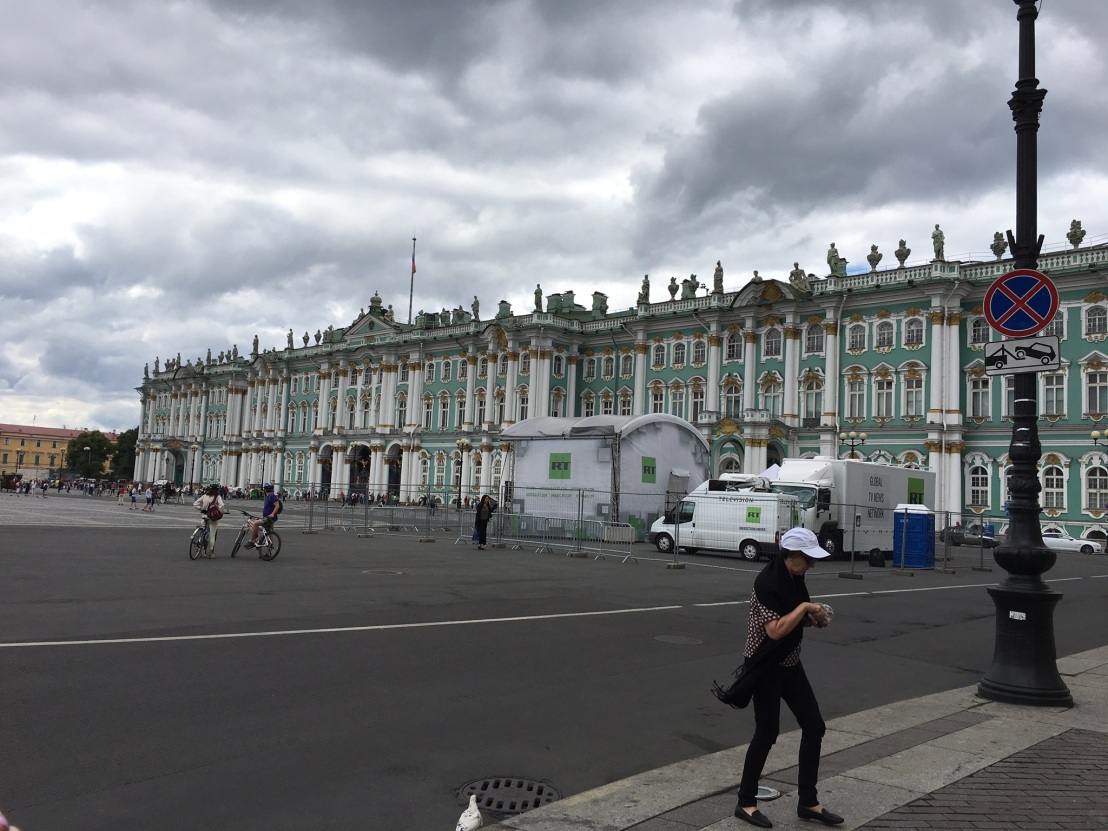 Above is the Winter Palace. This was, from 1732 to 1917, the official residence of the Russian monarchs.

Absolutely fascinating story of the construction, and of the breathtaking art presented inside. Some time after the completion, much of the artwork began to rapidly deteriorate due to the moisture in the air from being so close to the ocean. So they began the absolutely painstaking process of converting all of the artwork to mosaics, which would last infinitely longer. The effort was never completed.

The breathtaking Church of the Savior on Blood. Taking the lessons learned from Saint Isaac’s Cathedral, all of the artwork was originated in mosaic. If you have been following The Travelin’ Man, then perhaps recall from our travels in Helsinki where I discussed how much they loved Alexander II there and all the work he did to raise that city to greatness. Not everyone was happy with his philosophy of modernizing Russia. This church was built on the site where poor old Alexander II was fatally wounded by an assassin’s bomb. He was whisked away to the Winter Palace, where he died a few hours later. 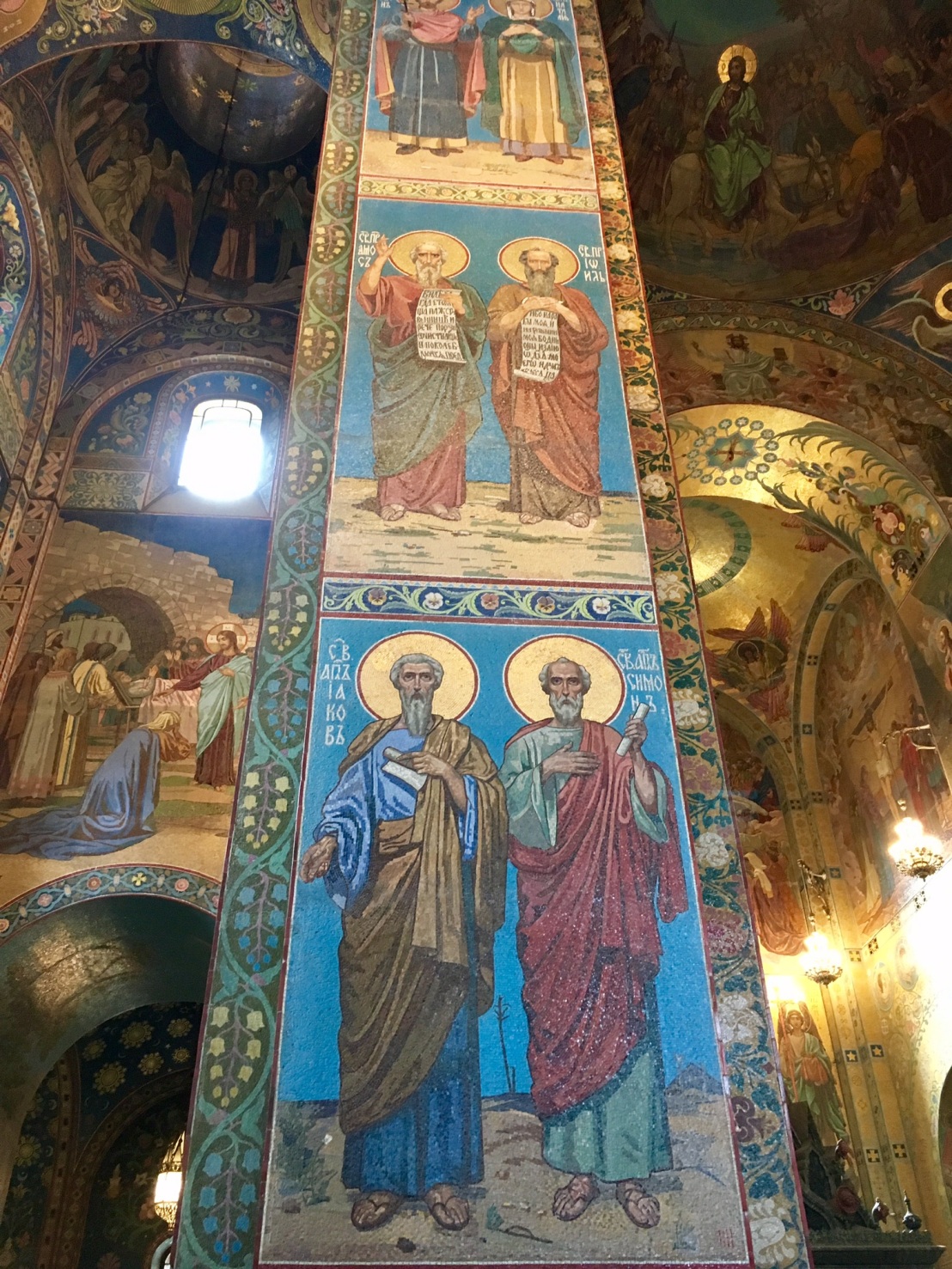 If you zoom in closely, you can see the millions of individual tiles used to complete the artwork.

There were a lot of famous people tied to the history of Saint Petersburg, and it would take years to study and document them all (or you could just go read Wikipedia). But there were a couple of exceptional importance that left a considerable mark on the city, and in fact, the country and even beyond. One was, of course, Peter the Great. I mean, they did name the city after him! So you should definitely stop by his old digs while you’re in town. 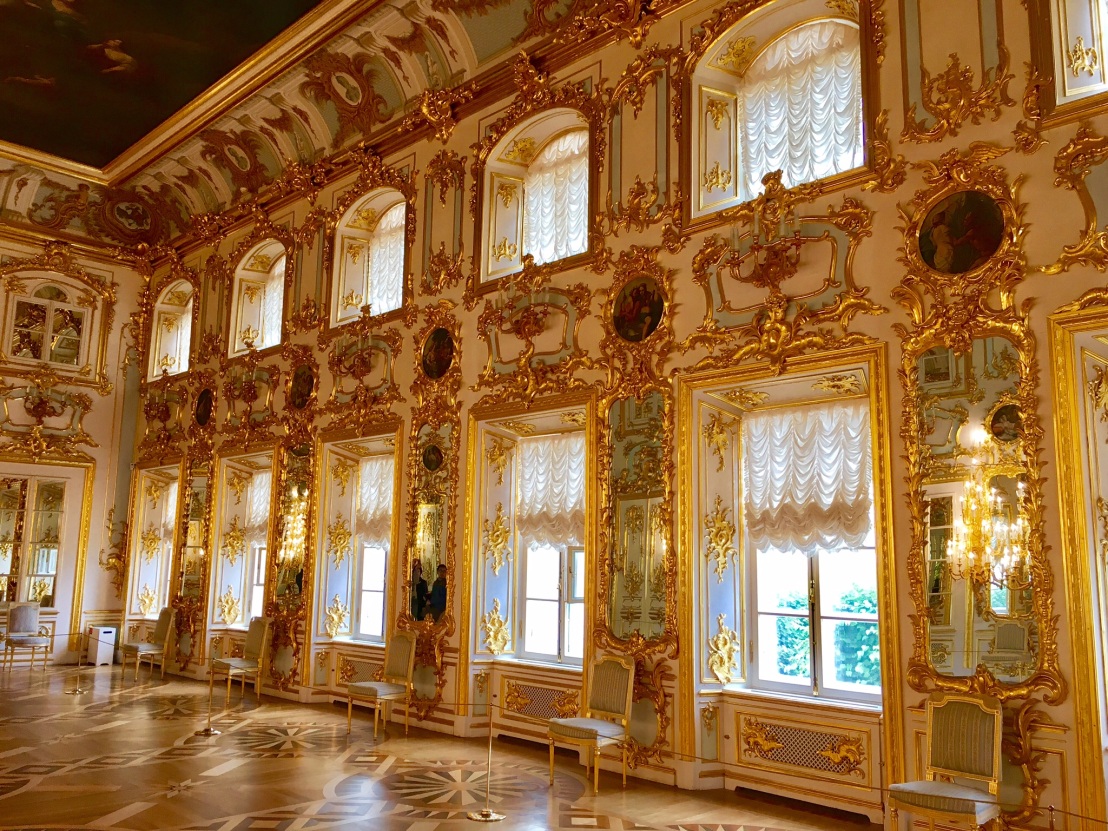 We spent the good part of a day here, and still didn’t see everything. As with all great palaces, it’s not just the breathtaking beauty, or draw dropping excessive over the top expensive construction and decorating that you want to see; it’s also about the surrounding grounds and gardens: 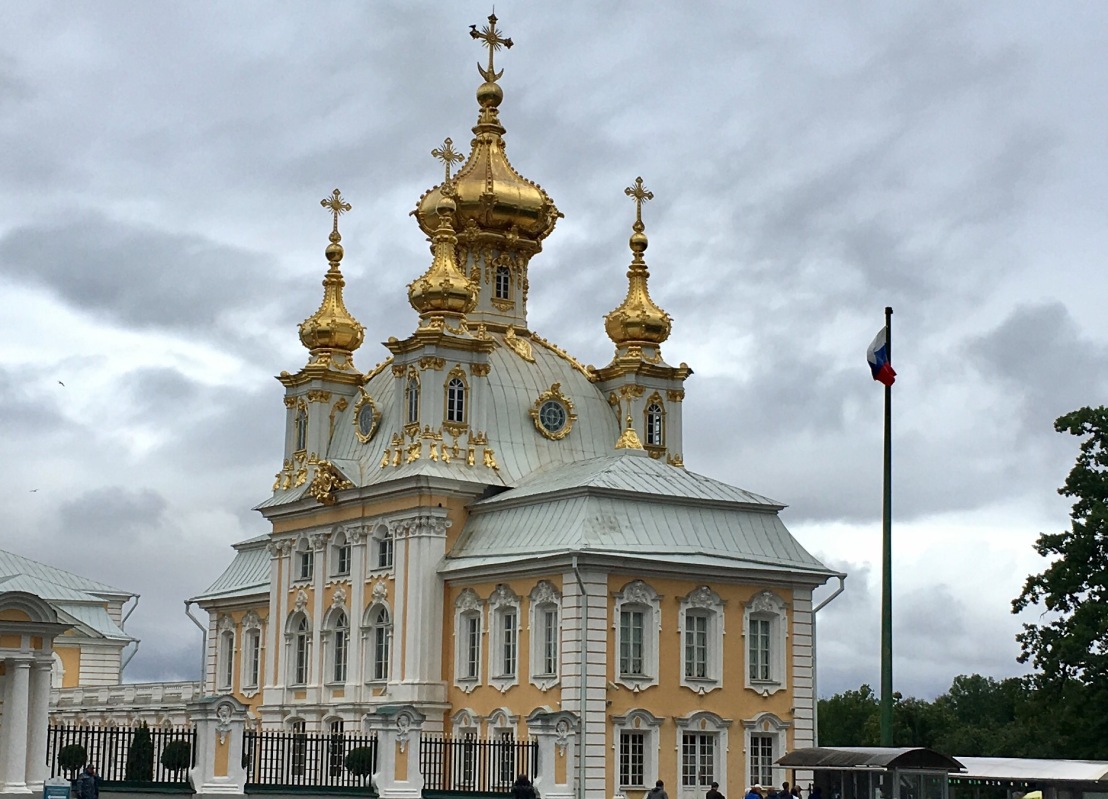 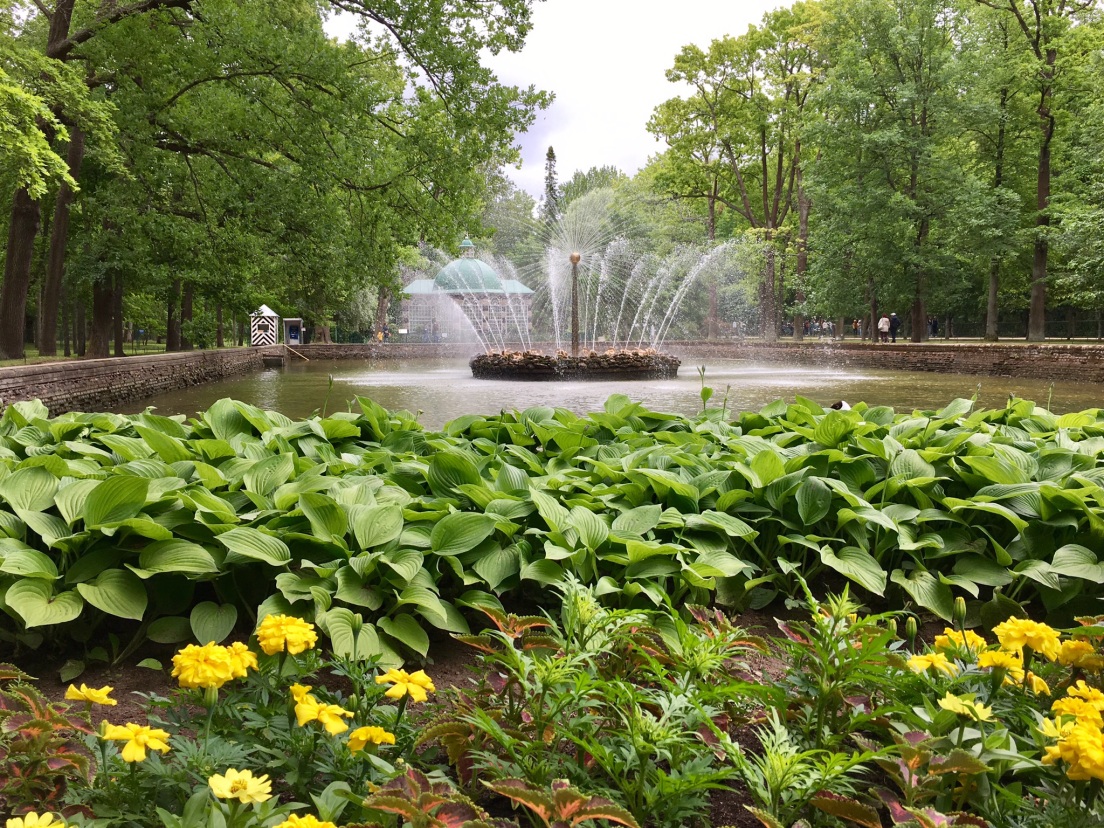 Catherine I of Russia was married to our friend, Peter the Great. The original structure was built in 1717 as a summer palace. You know….. just a little summer palace to hang out with your girlfriends while Peter is out conquering the world.

Then came Empress Elizabeth, one of twelve children to Catherine and Peter. When she became Empress of Russia, she felt the old summer palace was just too outdated and small. So in 1752 she had it torn down and rebuilt on a much grander edifice in a flamboyant Rococo style.

Next was the Empress Catherine II of Russia (no relation to Elizabeth…. long story). She disliked the flamboyant gold plating and extravagant styles of Elizabeth. So she remade the palace in a more modest vision, if that word can even be used in this context.

But after Catherine the Great passed away in 1796, the palace was not used by subsequent monarchs, who preferred the nearby Alexander Palace as a residence. After the Great Fire of 1820, Catherine’s grandson, Emperor Alexander I decided to refurbish the place to restore it back to the condition it was in while he was growing up there (Alexander I was raised by his grandmother, Catherine the Great… also a long story).

The palace was targeted and gutted by the Nazi’s during their retreat in WWII. Fortunately, the Soviets had documented the place in great detail, which was very useful during the restoration. Although the largest part of the reconstruction was completed by 2003, much work is still required to restore the palace to its former glory. This effort is still ongoing today. 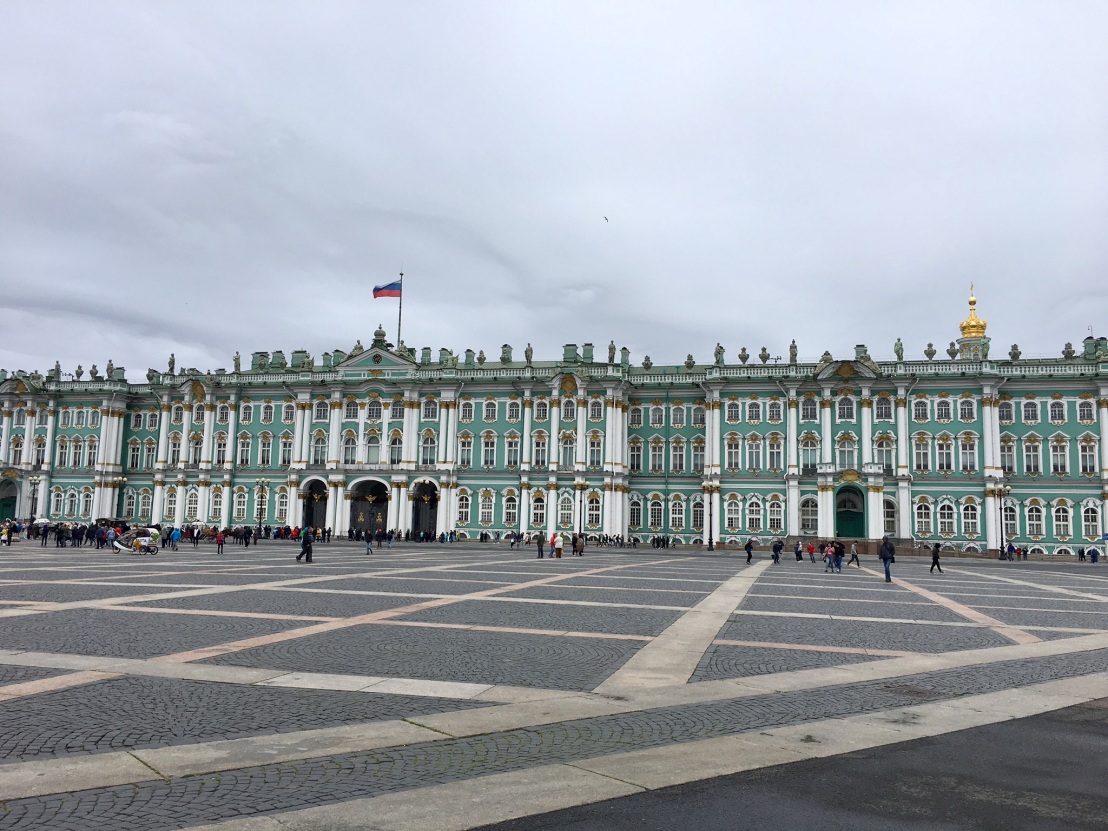 This is an interesting place. It consists of six buildings total. Five of these buildings are open to the public, namely the Winter Palace, Small Hermitage, Old Hermitage, New Hermitage, and the Hermitage Theatre.

I cannot convey to you how big this place is. It comprises over three million items! This includes the largest single collection of paintings in the world. And it is, overall, the second largest museum in the world.

As you wonder around in this vast museum and encounter room upon room upon building after building, it is truly information overload.

You could literally spend several weeks exploring all the displays. Here’s an image I copied from google that will hopefully put this into perspective:

It was founded in 1764 by Catherine the Great initially to house the impressive collection of paintings she had acquired from the Berlin merchant Johann Ernst Gotzkowsky (yup, another long story).

But the museum wasn’t opened to the public for nearly another one hundred years, in 1852. Hence the name “Hermitage” – it was given this name because of its exclusivity – in its early days, only very few people were allowed to visit.

Now, having said all that, how I cannot possibly even begin to show you any pictures that would scratch the surface of what is observed in this museum city!

Just look at this magnificent painting of the coronation of Alexander III: 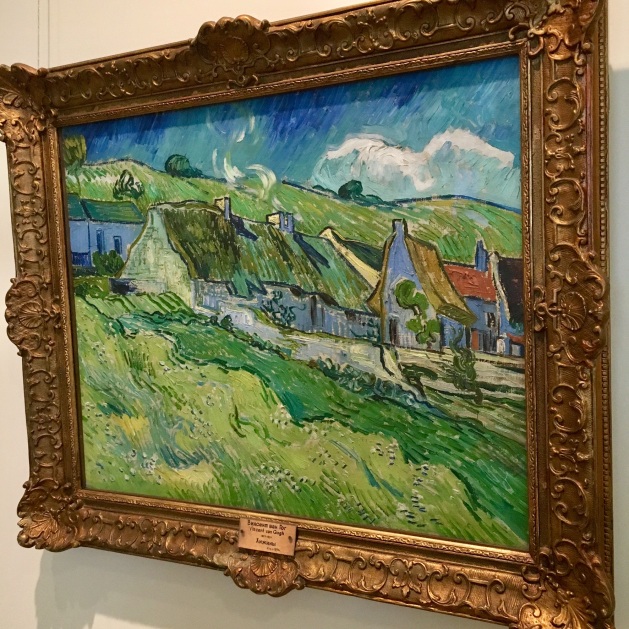 Collections include inspiring works from renowned artists. See above, Michaelangelo and Van Gogh. This entire floor is mosaic: 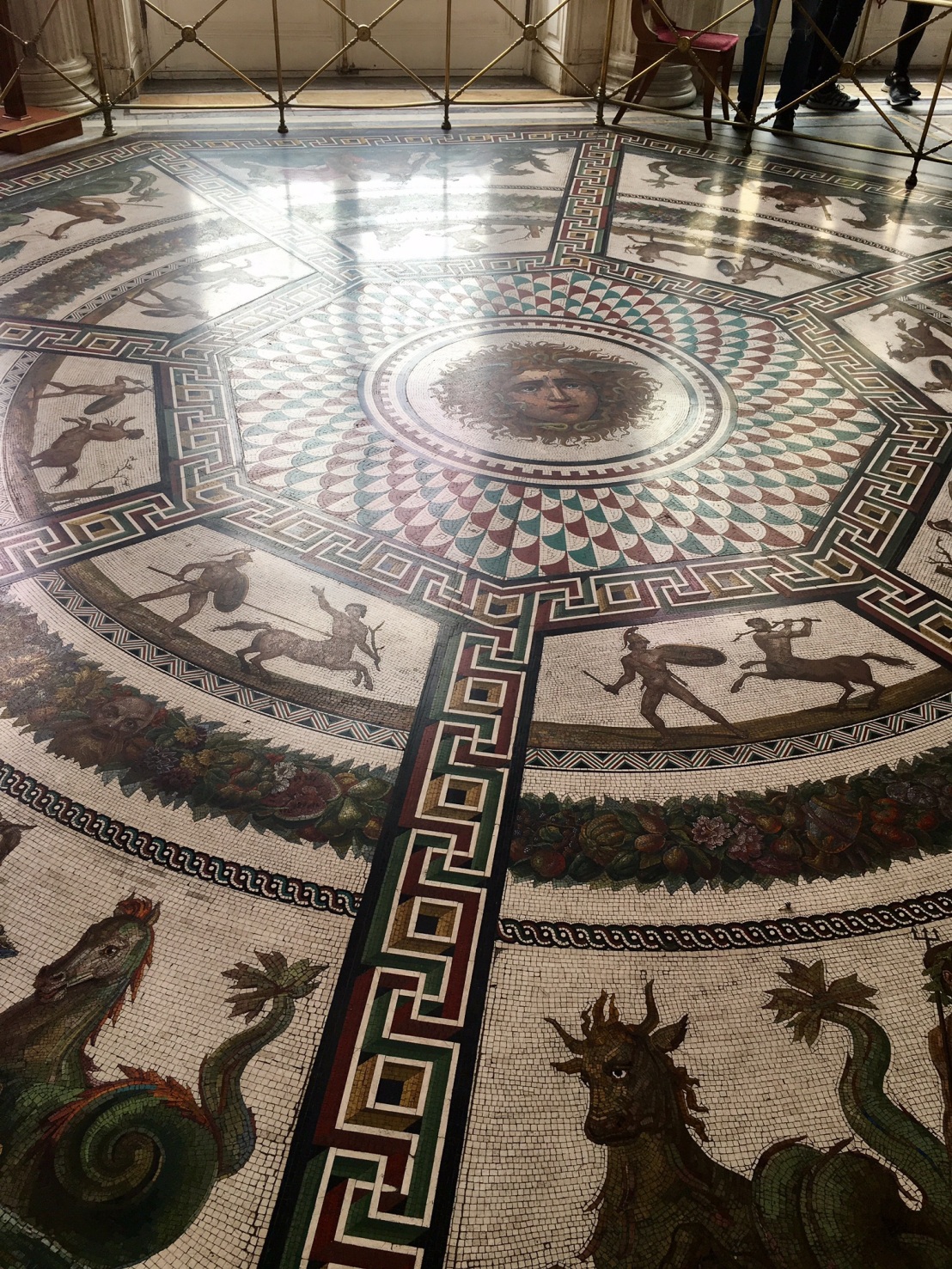 While you will never cover it all in a single visit, you should definitely set aside some time to visit this incredible place. Everywhere you look, from floor to ceiling, is art and beauty, not just the displayed items. 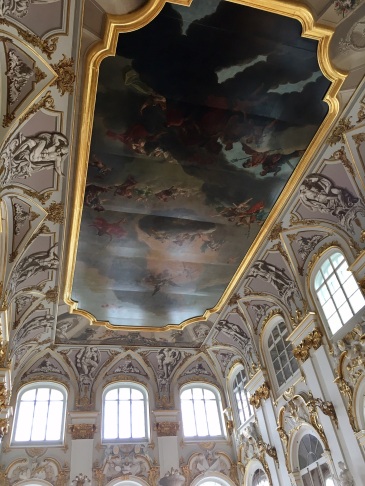 We enjoyed our stay in Saint Petersburg and would definitely come back again. Tons of things to see and do. We barely scratched the surface. While I had never really considered Russian food before, I must say it was quite delicious. Saint Petersburg is loaded with great bars, restaurants, and parks. I will say, it felt a little weird knowing we were in Russia….