This is one of those popular long weekend destinations from the Stockholm area. The nice thing is, you get on a cruise ship in Stockholm, cruise overnight, then wake up at your destination.

There are a couple of other popular locations for doing this:

If your geography is a little rusty, check out the map below. I’ve drawn a line to show where we are, and I circled Tallinn and Helsinki for reference: 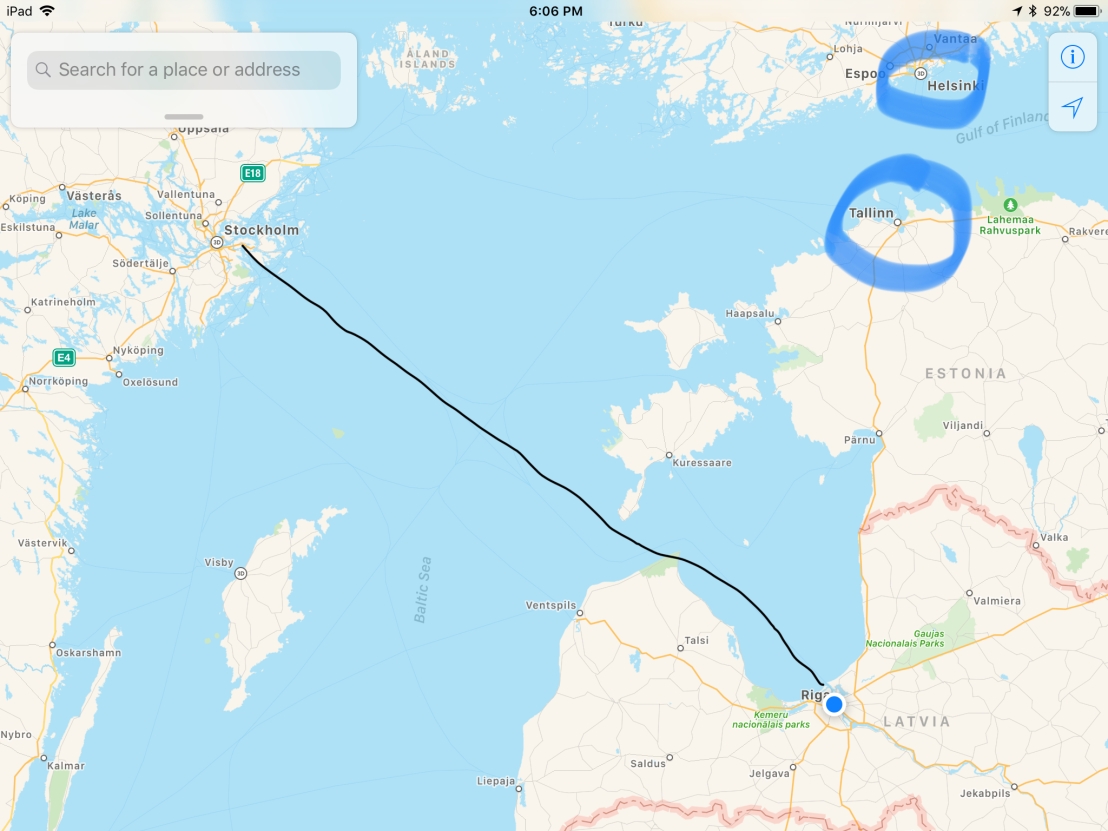 So from Stockholm, all these locations are a one night cruise each way. It is so nice doing the one night cruise. There is nothing to do but party and eat. It’s a great way to get you in the mood for your upcoming long weekend!

The Cruise to Riga

The cruise takes us out into the open Baltic via the all to familiar path through the Swedish archipelago we have taken many times before. But the big difference here is that now we get to see what it looks like with snow on the ground. Yes, I know technically it’s spring, but we’re still in winter mode out here. Anyway, the same path, but it looks totally different. Take a look at these pics:

The ice was actually a bit of a problem. Beautiful to look at with a glass of wine in your hand. But we went through large patches of this overnight, while we were trying to sleep, and the ice grinding against the hull of the boat is quite loud.

But even though the ice cost us a little shut eye, it was so beautiful to see. What a unique and rare experience.

The next morning, while eating breakfast by the window, it was actually snowing! First time I’ve ever been on a cruise ship while it was snowing.

Things we did in Riga

Riga is a town that has been tortured by history. I get it; lots of European cities have rough histories. But this one in particular has had it rougher than most. Hostile take over by the Christians in the medieval period, violent repression by the Soviet Union, then the Nazi occupation during World War II. The city was heavily bombed during this time. The Soviets eventually got the Nazis out, but then they decided to stay. More repression, more violence. Nearly 100 people had been secretly executed by the KGB after the war (the graves were found after they left), and thousands had been deported. In both cases, their families had never been notified, the victims simply disappeared. In 1991, Latvia (and Riga) once again regained their independence from the Soviet Union and has been free ever since.

Despite this painful and heartbreaking history, the city is a strong, resilient hub of culture. Great museums, bars, pubs, restaurants, and beautiful parks. But everywhere you go, you still hear the whispers of their past.

We hired a private tour guide from Riga Old Town Tours. Surprisingly, they have a web site called rigaoldtowntours.com. Our guide was really nice and very professional. It was a two hour tour spanning nearly three miles of primarily, you guessed it, Riga old town.

Riga was heavily bombed during WWII by the Soviets in an attempt to dislodge the Nazis. Many of the buildings and churches seen throughout the city were rebuilt. Some of the squares you see in old town were not actually squares, but areas that got decimated during the bombings and were not rebuilt. 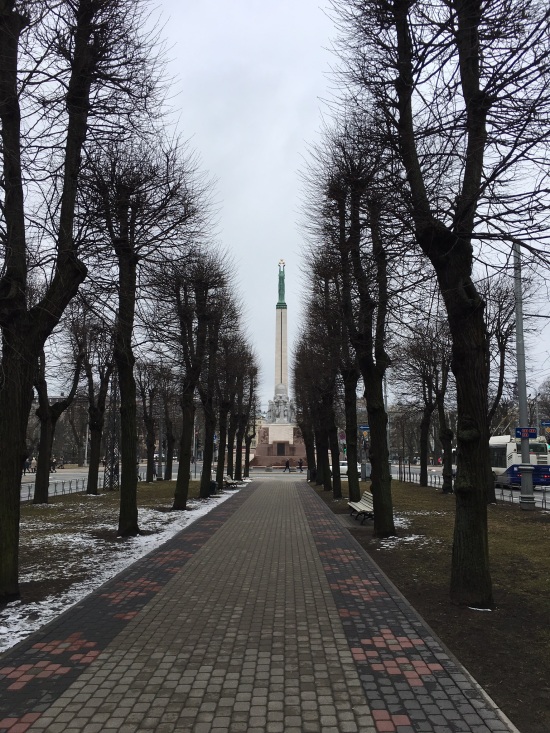 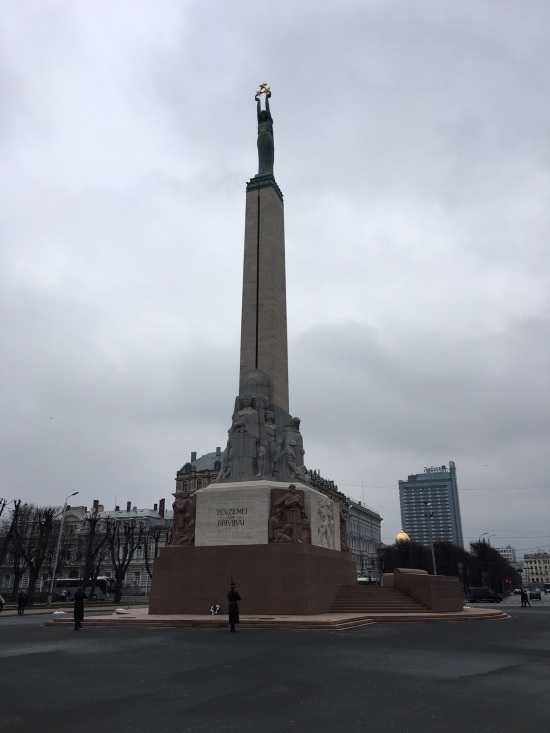 It is amazing how some of the things in the city somehow managed to avoid damage from the bombings. This statue, for example. It is 138 feet tall (42m).  This is the Freedom Monument and was erected in 1935 to commemorate Latvia soldiers lost in their previous war of independence (1918 – 1920). It survived the WWII bombings and subsequent Soviet occupation. The Soviets nearly demolished it several times, but each time, fate intervened and thwarted their efforts. The Soviets never knew the true meaning of the statue. But imagine how the people of the land felt for the nearly fifty years while the Soviets occupied the area. Imagine how they felt each time they saw this monument.

There is an entire museum dedicated to the occupation, but it was closed during the  time we were there.

Another interesting relic that survived it all. As you can see, the rest of the world has moved on, but this bar, appropriately named Medieval Bar, is determined to freeze itself in time. Can you believe it can entertain 150 guests!? That’s because it is primarily underground. The restaurant/bar is built where the old wine cellar used to be back in 1201!

Historic statues, artistic sculptures, and unforgettable art. So rich in history and culture that I could easily spend an entire week here exploring and learning.

The city is also adorned with many beautiful green areas and parks. While the frozen scenes above were beautiful in their own, wintery rights, I can only imagine how gorgeous this place is in the height of summer.

I could easily write an entire article on this attraction. Notice that I didn’t call it a museum, because it’s not. It is the actual local headquarters for the KGB during the Soviet occupation. It is presented as-is, or should I say as-was, with few modifications from how it was discovered. The only changes they made were in the name of preservation. 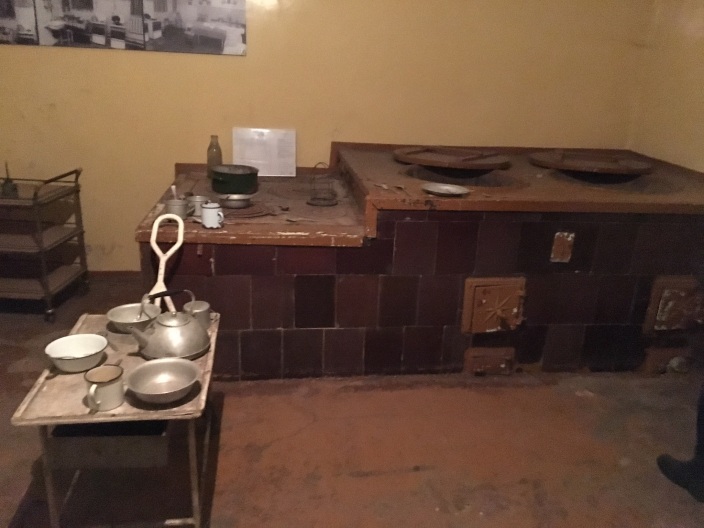 This was a very dark era for Riga, and you take a small residue of that with you after touring this building. It is demoralizing and depressing. But it is a part of history that deserves to be remembered, lest it be forgotten and repeated. This is the building people were brought to once they were “identified”. Arrested is the wrong word there because no records were kept of the abduction and no family was notified.

They were brought here and exposed to various forms of interrogation and questioning. If the authorities didn’t hear what they wanted, it escalated to imprisonment and torture. If sufficient evidence was found that the person or persons were working against the Soviet Union, or they got the confession they wanted to hear, the victims were taken to the execution room and shot (the bullet holes are visible in the wall). If sufficient evidence was not found and they concluded that they would not be able to get a confession, then the subject or subjects were deported and never seen or heard from again.

On a side note; when the KGB vacated the building, the wall in the execution room with the bullet holes had been bricked up. The entire building was analyzed and the fake wall was discovered. At the behest of the government, the bricks were taken down and the wall was exposed.

What’s even sadder about this whole affair is that, unbeknownst to the citizens, all this was happening right in the KGB building, right in the center of town. They never knew, because no one ever escaped, and no one was ever released.

Jana always manages to find the absolute coziest little hotels and B&B’s, and this one is no exception. Located right next to the river, and convenient for walking everywhere we went.

It’s called ‘St. Peter’s Boutique Hotel’, and it’s located at ‘Peldu Street 23, Riga, LV-1050, Latvia’. You can get to their website by clicking here.

We were only here for one night, so we only got to experience one restaurant. We went to a place called Folkklubs Ala Pagrabs. Like many of the establishments here, it was down in the basement. Very cozy atmosphere! I was a bad Travelin’ Man cause I didn’t take any pictures. The food was delicious. I got a pork hock, which is a very popular dish here. It was splendid. It was really more of beer environment (over 50 to choose from), so don’t come here for the wine. 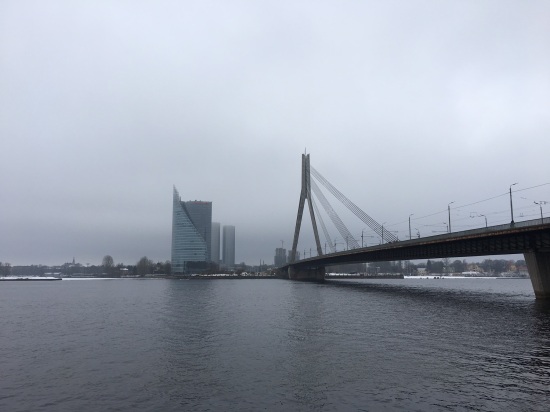 Across the river Daugava was a thriving, bustling metropolitan Riga. We didn’t venture over on this trip, but there were tours available. We really want to come back here in the summer and see what it looks like with everything in bloom.

That was pretty much it. We had a great time and will try to come back. One final note for those who do take the cruise over; this is a shipping town, meaning they make a living primarily from ship commerce on the river. If you are awake when the ship comes into town, you will see the complete shipping operation. It ain’t pretty. And it wasn’t meant to be. So take it for what it is and enjoy the rest of the city!

One thought on “Riga, Latvia”