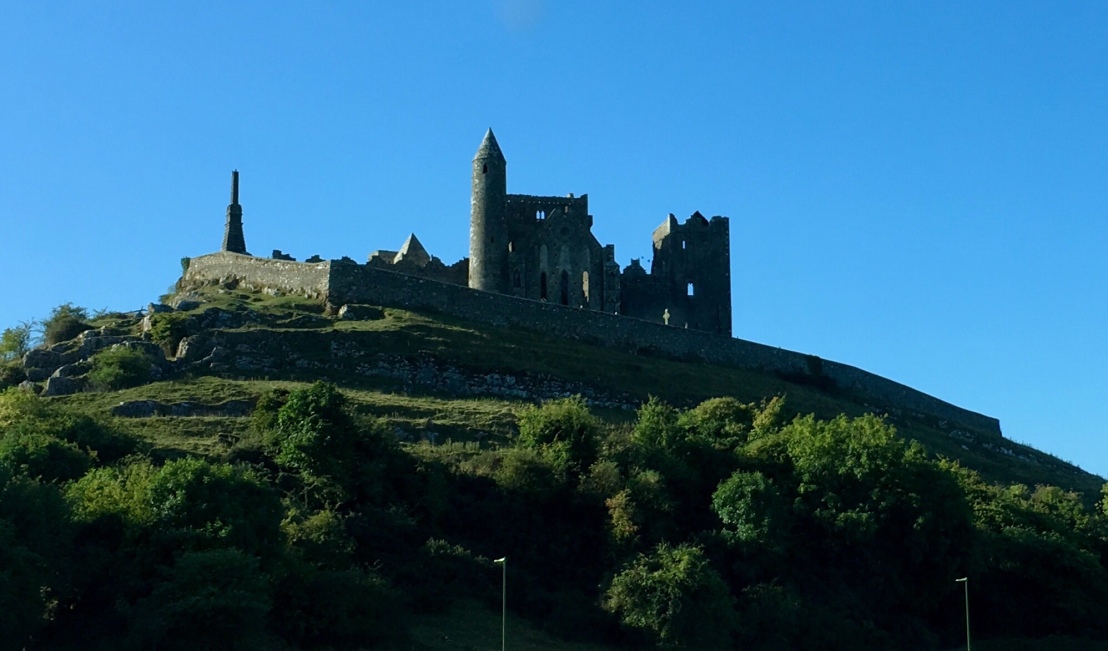 The morning after the Waterford factory visit, we set out in a south/south-westerly direction as we headed towards Killarney. I know, what is up with the “kill” city names? There are actually quite a few of them. They have Killusty, Killaloe, Killoscully, even a Kilbrittain! I kept looking for a Killbill, but I never saw one.

Anyway, on our way to Killarney, we stopped by a few castles. Ireland has seen its fair share of war and hard times. Especially during medieval times and extending well into the 18th century, castles were a fundamental underpinning of Irish survival and culture. You could literally spend a lifetime studying the castles of just Ireland. 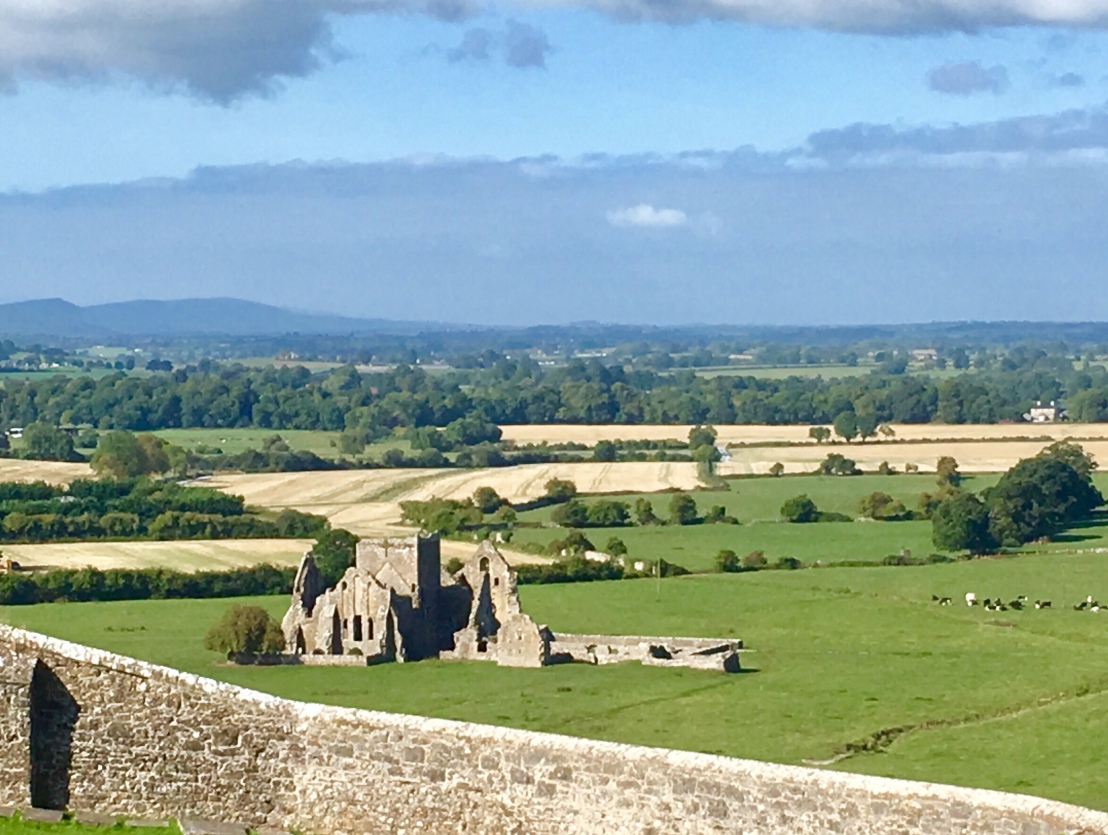 While an exact count is unknown, there are an estimated 30,000 castles and castle ruins in Ireland.

During our vacation in Ireland, we saw quite a few castles. I will spare you the 100’s of photos I took of them and share with you a few photos from three of the castles we went to as we worked our way southwest toward Killarney.

As The Travelin’ Man, I have probably reviewed at least a dozen or so castles with you, so I hope you aren’t burned out on them! Nonetheless, I’ll keep it brief and try to highlight the most noteworthy aspects.

The Rock of Cashel 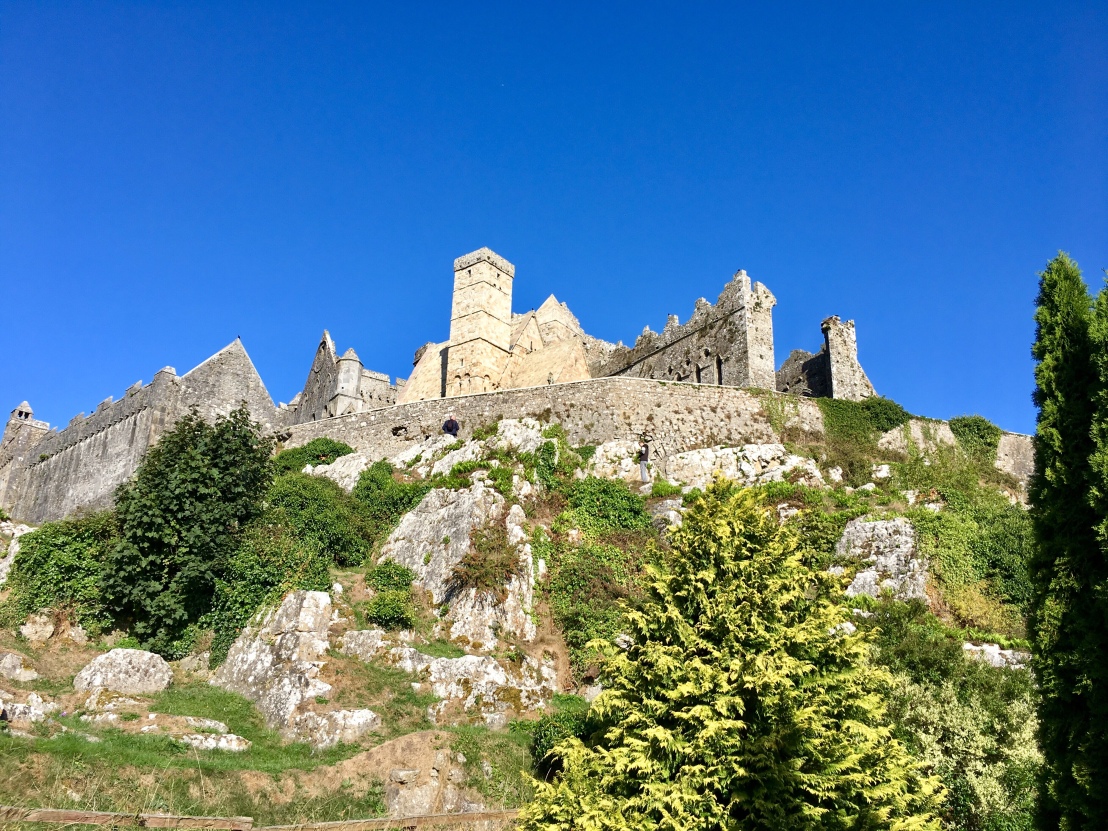 The Rock of Cashel is the name of this castle. They had to be creative with the name. I mean, they couldn’t name it Castle of Cashel… or Castle Cashel. Think of all the embarrassing tongue twisters the nobles would have had, especially after a goblet or two of wine! 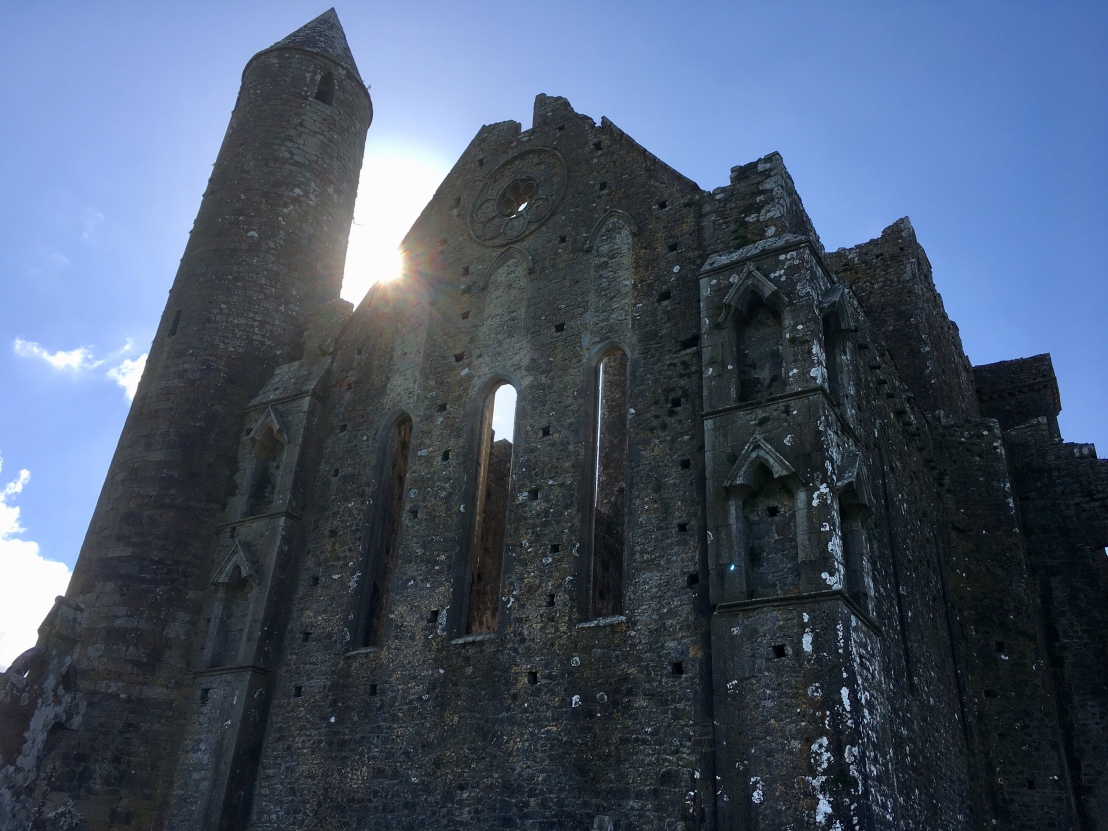 It’s all just as well since it really isn’t a ‘castle’ anymore. In a highly political maneuver, the King of Munster donated the fortress to the church in 1101. Most of the buildings that remain were built after that. The round tower, shown above, is probably part of the original castle, but the temple was from about forty years after the land was donated to the church (finished in 1137).

Check out the picture at the top of this article. That is the Rock of Cashel, from the peasant’s viewpoint. Absolutely breathtaking and one of the most visited attractions in Ireland. 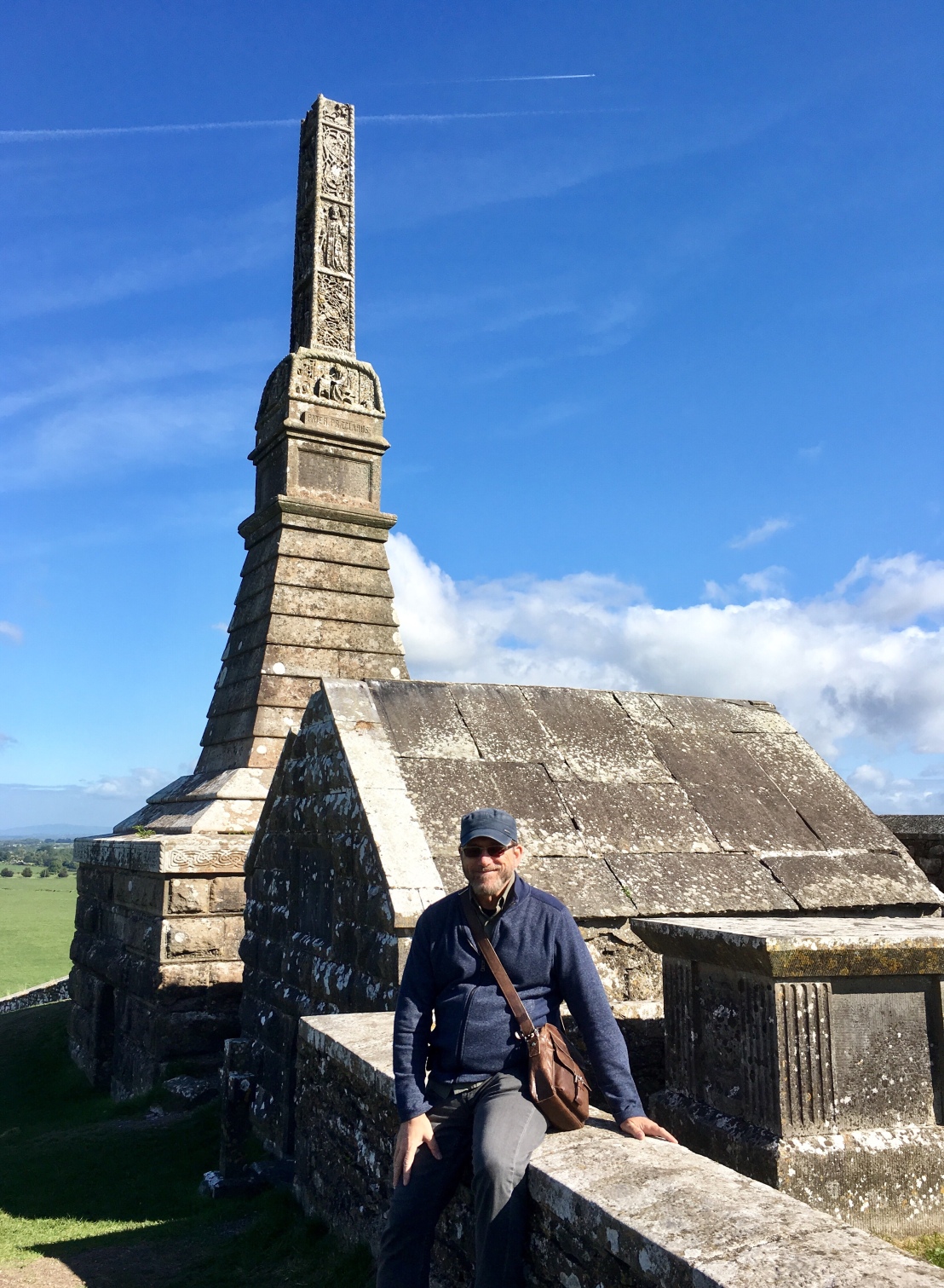 That statue behind me is the famous Scully’s Cross, built in 1867. But where’s the cross, you ask…. an extremely powerful bolt of lightning struck it in 1976, knocking the cross completely off. Can you just imagine if you could have captured a picture of that! Wow! 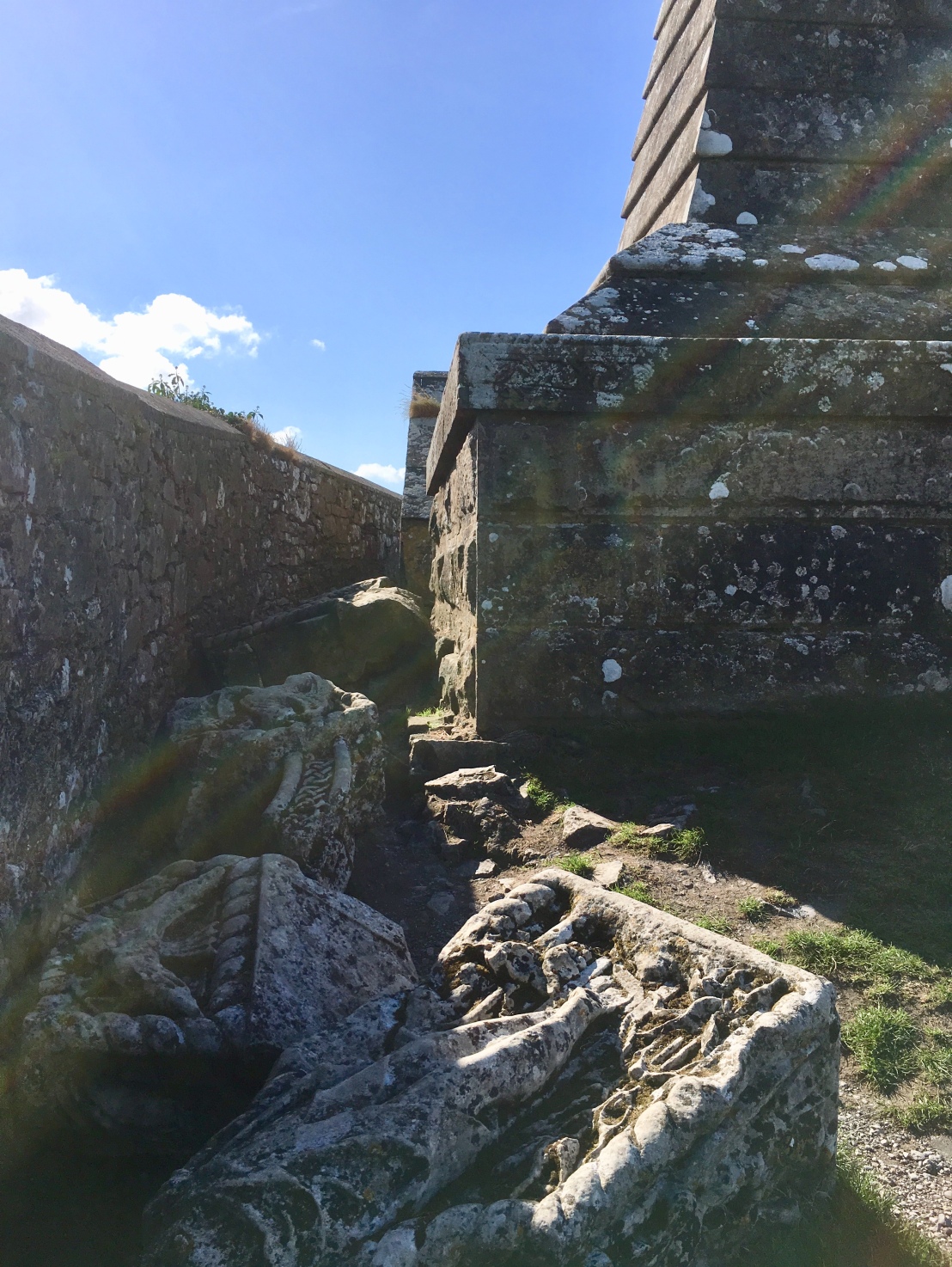 The remnants are still where they fell on the ground at the base of the statue. You can also see the statue rising above the wall in the picture at the top of this article (it’s on the left). 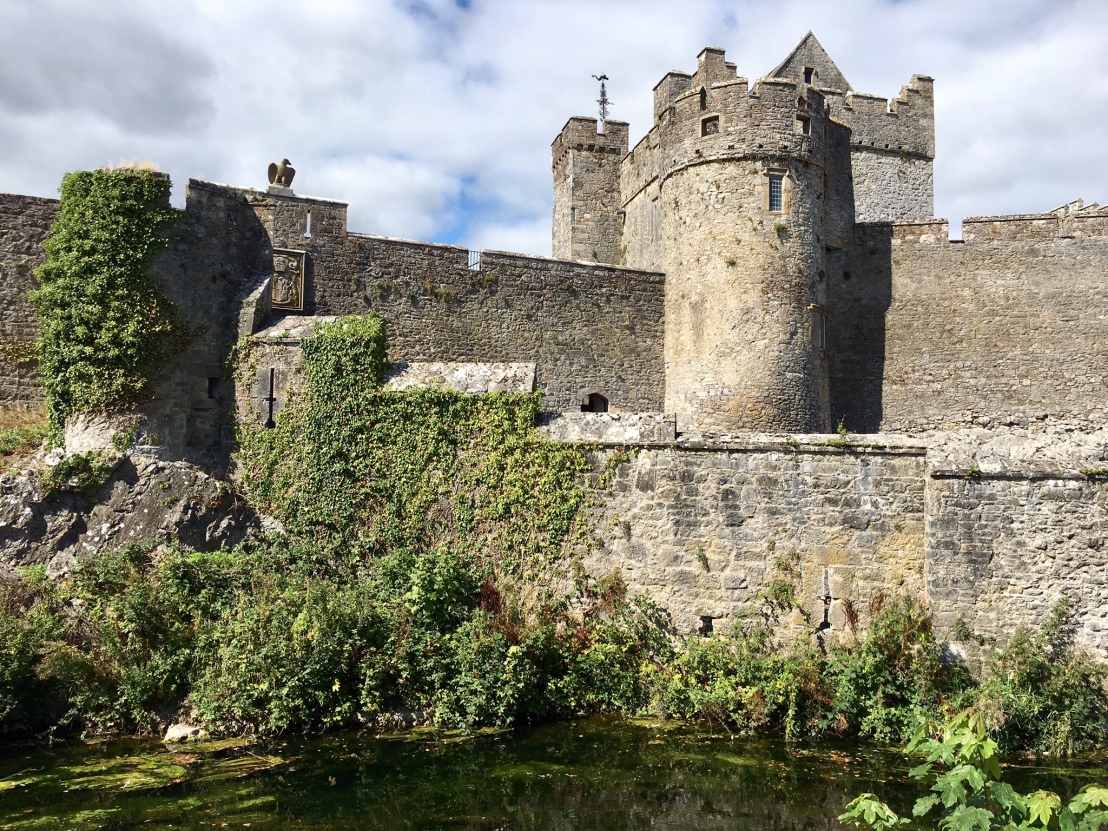 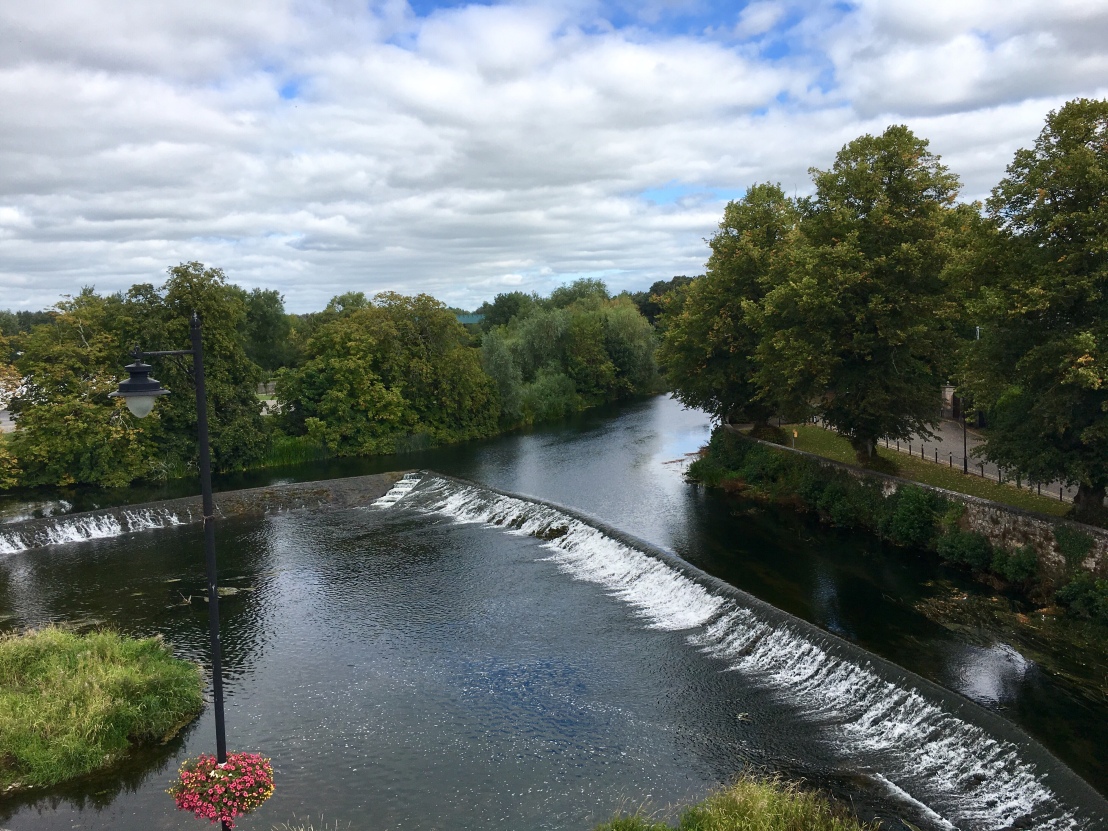 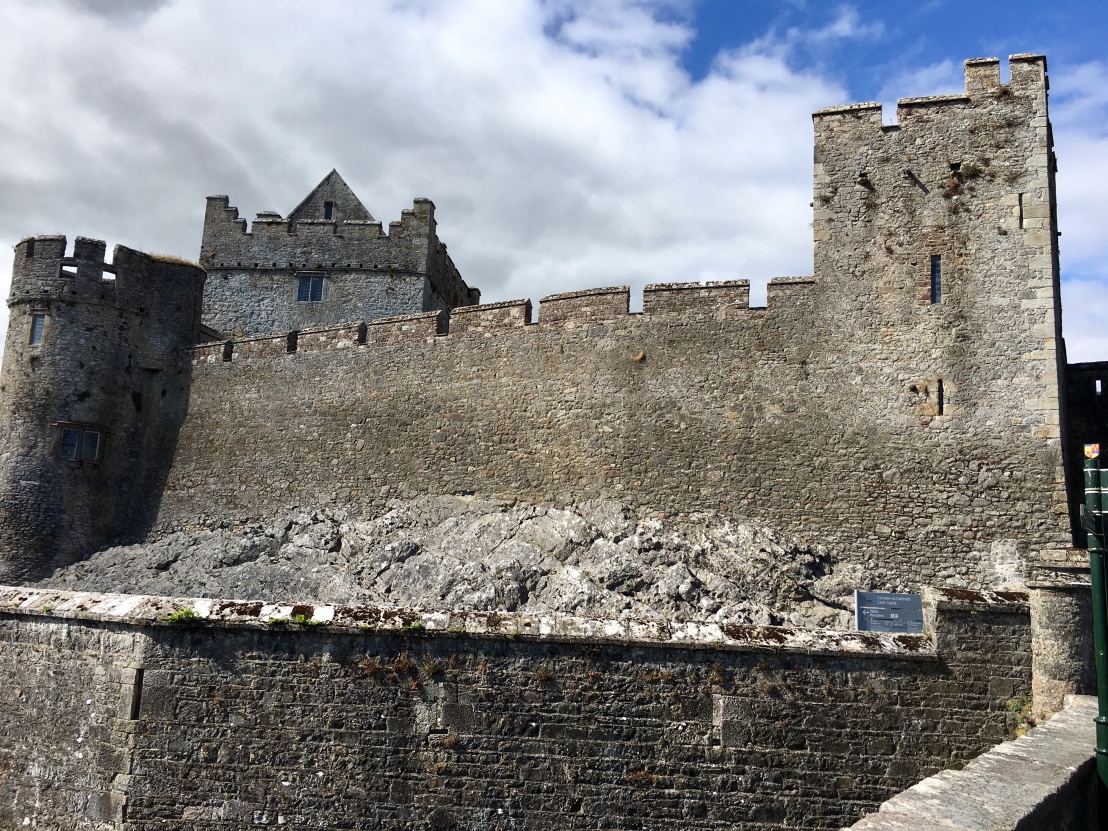 It was built on an earlier native fortification known as ‘cathair’, which translates to stone fort, which is where the name ‘cahir’ comes from. 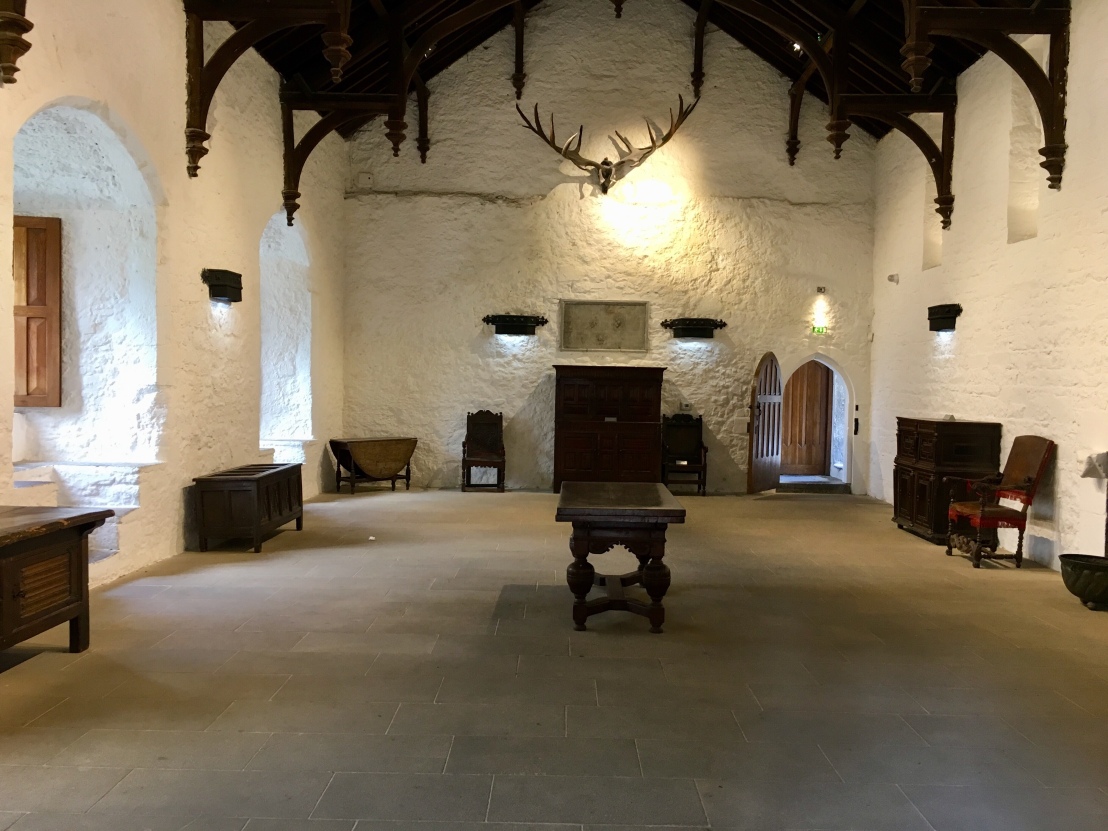 It was used as the location for a battle scene in the 1981 move Excalibur (the entire movie was filmed on location in Ireland). 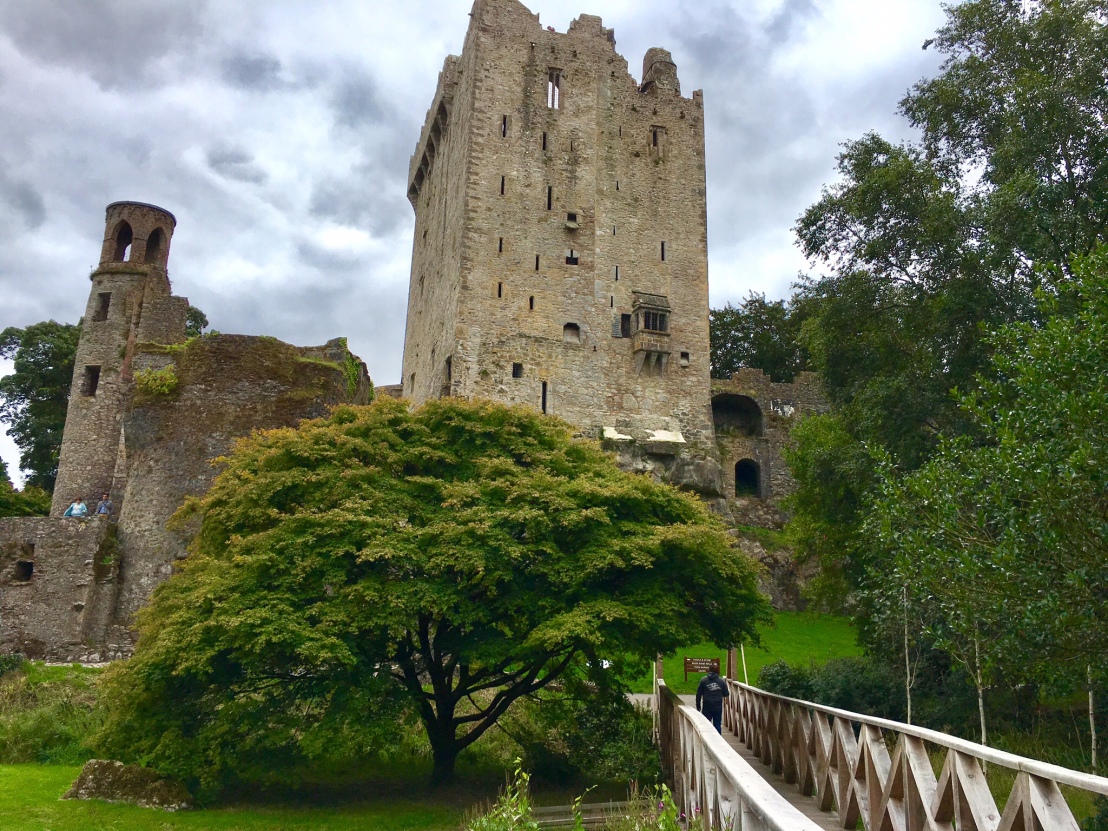 More of a keep, really, than a castle. Although it did see it’s fair share of wars and sieges throughout the years. Poor ole Blarney has been torn down, blown up, burned up and rebuilt so many times over the last 800 or so years that it’s hard to say when it actually became a fortress. But most of the remaining buildings date back to the 15th century.

Ah, the Blarney Stone. What is the magic of this stone that draws millions of people thousands of miles just to risk their necks to kiss it? Before answering that, do you know what blarney means? The word blarney refers to pleasant flattery or charm, especially as related to persuasion. 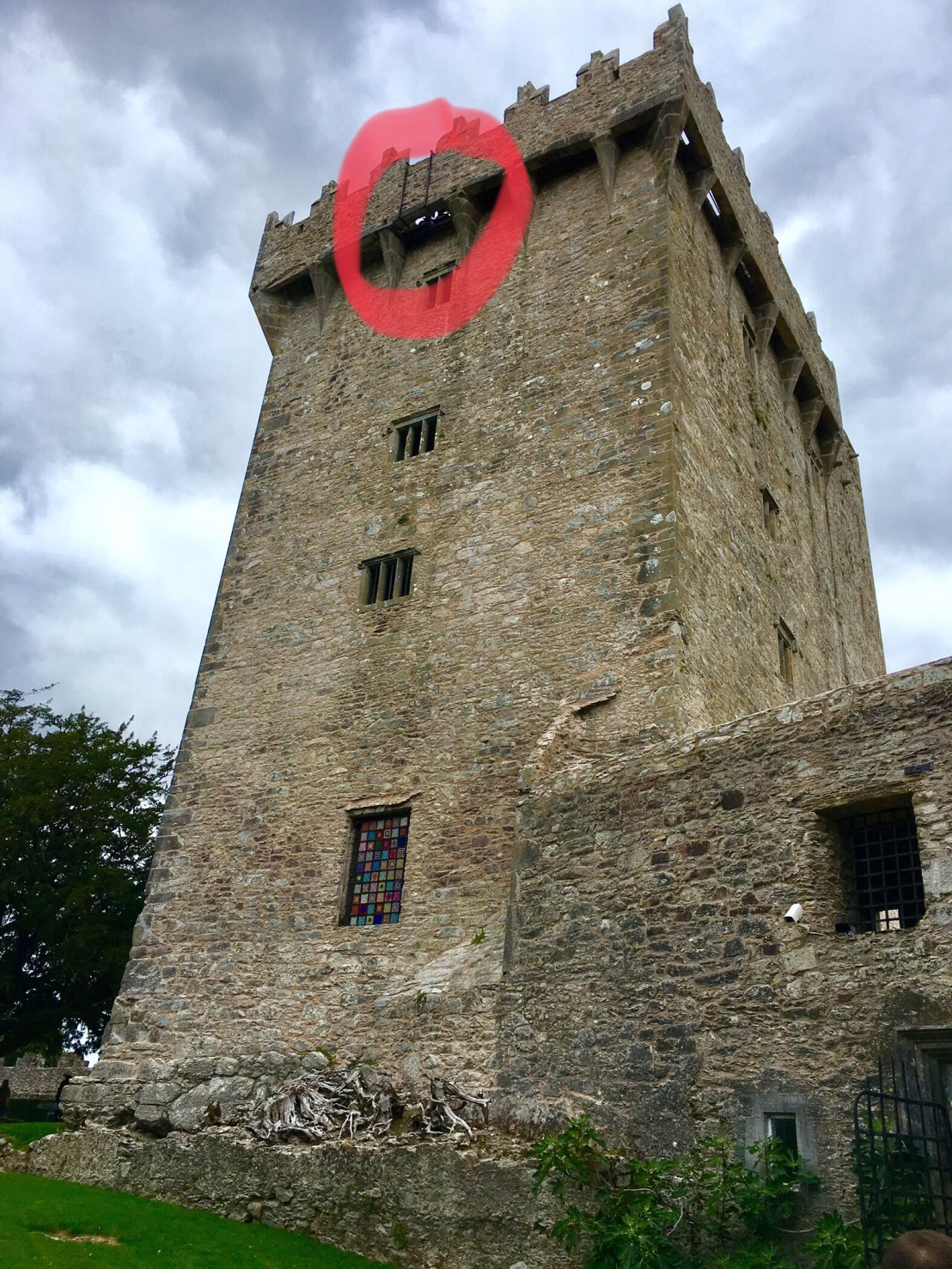 You can see in the picture, above, I have circled the location of the stone from the outside. You have to climb the tower, lay down flat and lean out over the battlement while someone holds you by the ankles.

Now the Irish are great storytellers, and great whiskey makers. So depending on who you ask and what time of day you ask, you will get an assortment of colorful, imaginative stories that explain the stone. But I can’t leave you with that, can I? My favorite story involves the builder of the keep. Here it is quoted from Wikipedia:

An early story involves the goddess Clíodhna. Cormac Laidir McCarthy, the builder of Blarney Castle, being involved in a lawsuit in the 15th century, appealed to Clíodhna for her assistance. She told McCarthy to kiss the first stone he found in the morning on his way to court, and he did so, with the result that he pleaded his case with great eloquence and won. Thus the Blarney Stone is said to impart “the ability to deceive without offending”. MacCarthy then incorporated it into the parapet of the castle. 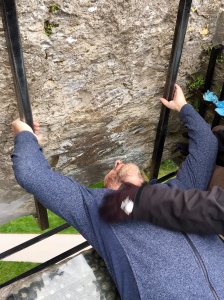 So yes, of course we climbed the tower and kissed the stone. Who wouldn’t want the power of blarney in their personal toolbox?

4 thoughts on “Castles of Ireland”