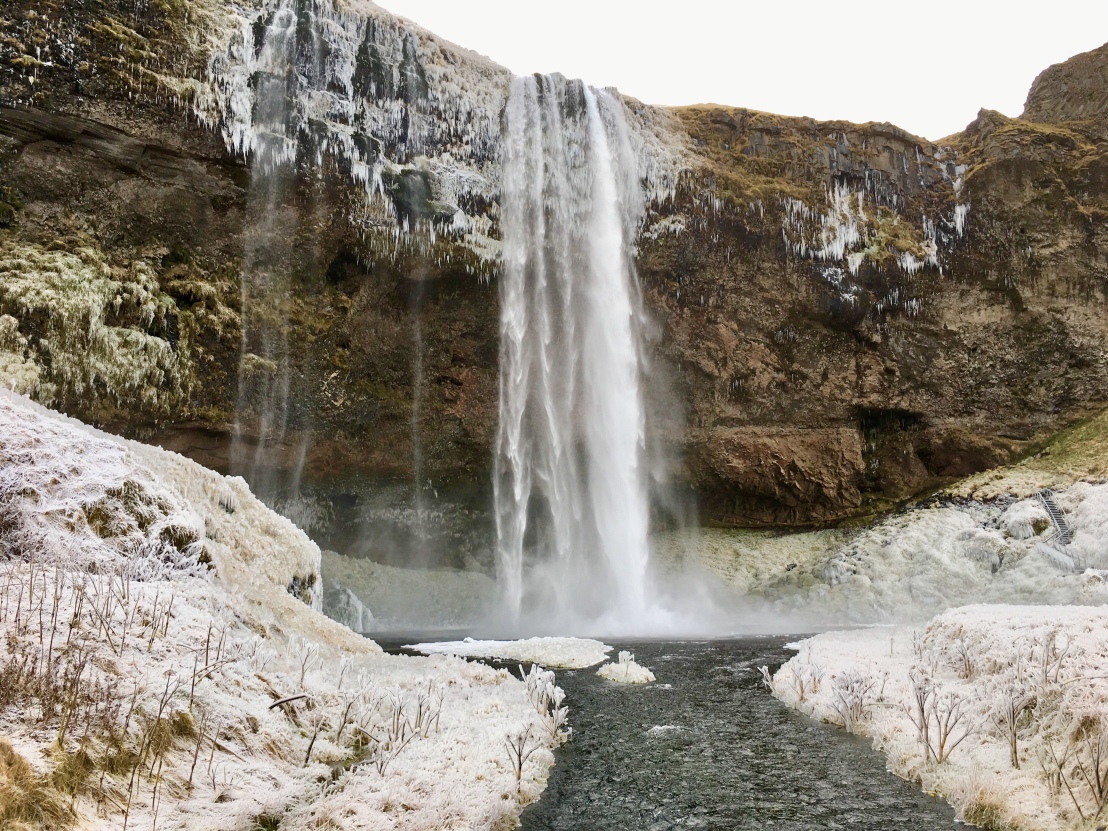 We went out into the rugged, wild terrain of Iceland in what is called super jeeps. On our way to the viewing area, we stopped at a beautiful waterfall (the featured image at the top of this article).

From there, we went onto the back roads that eventually turned into dirt roads. And then finally, we reached the beginning of the trails. Just looking at the rocky, precipitous “trail”, you would have said it was impassable. But pass we did! After about an hour, we arrived in a remote area that was free from light pollution. The sky was so clear it felt as though you could see forever.

Then the northern lights came. No, seriously, that is them, above. I had only seen the northern lights in pictures, and what I saw now was a lot more subtle. More like a high, light cloud that stretches across the view. But I get it, they don’t always shine bright. We all stood around drinking hot chocolate spiked with vodka. Might not sound all that good, but believe me, in 20 degree F weather with a stiff wind while standing out in the open looking up at the sky, that stuff was like the nectar of the gods!

As the cold set in, our faces and toes began freezing. We retreated into the Jeeps to get out of the biting wind and wait it out. Our host told us we would wait up to three hours if that’s what it took. Or should I say th-th-th-three-ee hours! More vodka please!

And then it happened. The dance hall in the sky opened for business and the bright green and white lights flared across the sky. We jumped out of the jeeps and stared in awe as the sky transformed into a light show of the heavens. 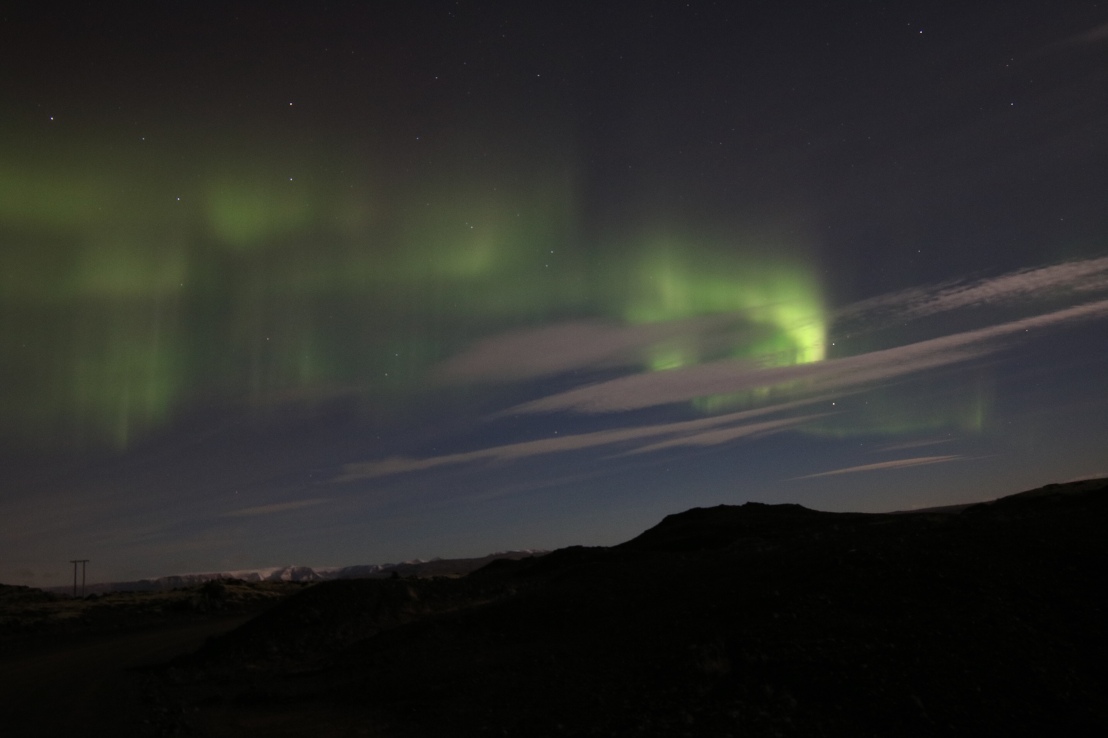 We stuck around for about an hour more. The lights would fade and dim, then fire up the sky again with shifting hues and dancing lights. You get none of this movement in still pictures. It must be seen in person to be truly appreciated.

I have to say, it was one of the most astounding things I have seen in all my travels. I tried to take a few photographs, but I was determined to not let that distract from my experience. Besides, we had a professional photographer capturing the whole thing (those are his pics, above). I snapped a few and then put the camera away and recorded it with the camera in my mind.

Ok, so a little tough to top seeing the great northern lights. But climbing on top of a giant glacier? Well that’s pretty awesome, too! In case you need a geology refresher, a glacier is basically a gigantic block of ice that forms in exceptionally cold places where it snows a lot, like high in the mountains or near the poles. Massive accumulations of snow that never melts, upon which more and more and more snow falls, until the snow beneath becomes compressed by the weight, forming ice, then more snow, and so on. Think of it as when you scoop up some snow in your hand to make a snowball. You push and press the snow and it becomes more solid. So it’s like that, times a billion. 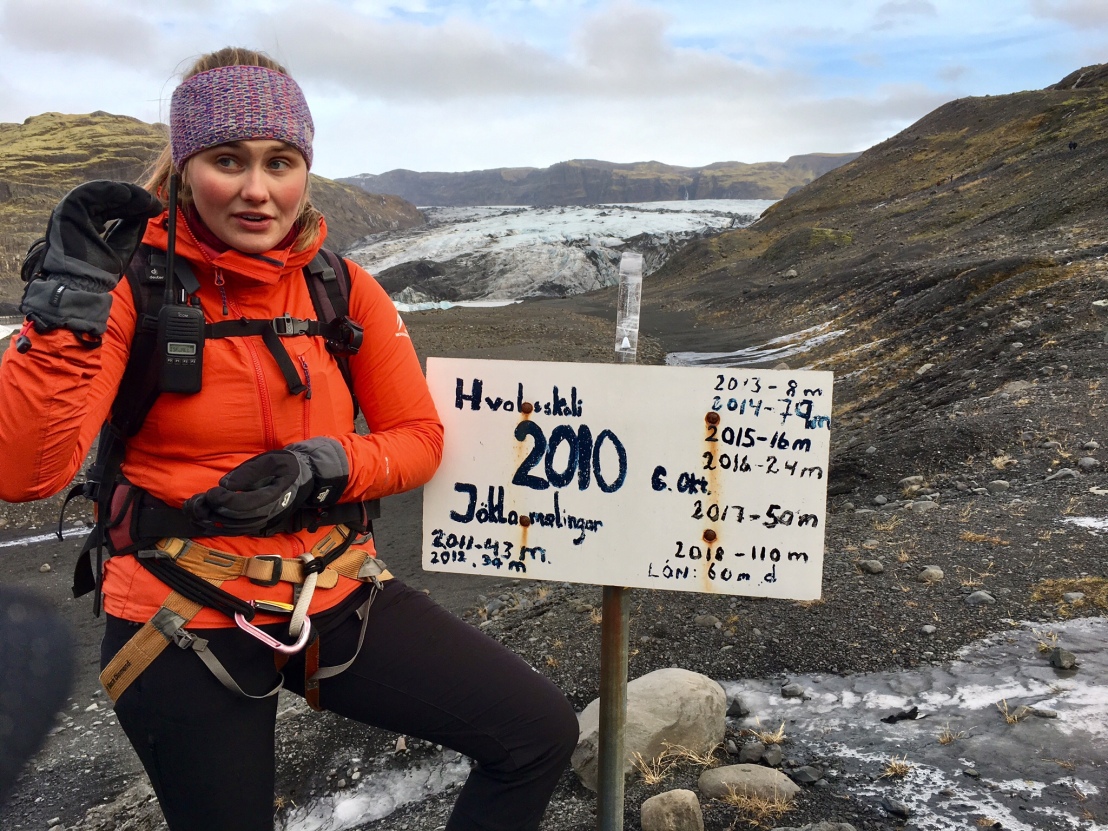 The glaciers of Iceland, and in fact the world, are slowly melting. Our guide, above explains the sign that depicts the ‘meltage’ history. Yes, you are reading that correctly, 110 meters just last year. That’s 360 feet! And as you can see, it is melting at a higher rate with each passing year.

And because of this melting, the glaciers move and shift and change faster than ever. Streams of water flow on the top, carving a small path in the ice. As it cuts deeper, it gets colder, and the water freezes again. Huge cracks, two and three feet wide form all along the glacier. It’s really kind of sad when you think about it, it’s like a mountain is slowly dying. But, it makes for fantastic beauty and adventure for us humans as we crawl all along it like a bunch of ants.

All told, we hiked about six miles. Mind you, that’s not like six miles in your neighborhood or park – it was on dangerous, slippery ice. 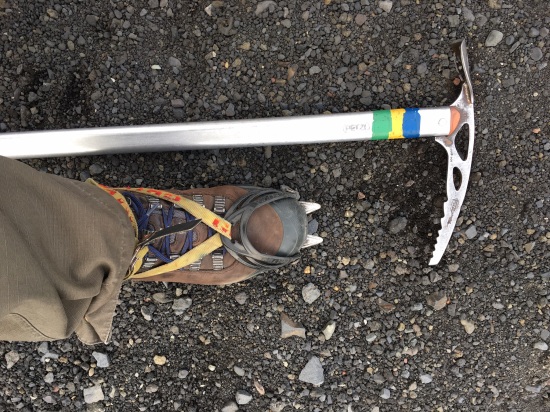 We had climbing axes and wore crampons on our boots. Without these, the terrain would have been impassable.

Note the dark colored ‘dirt’ in the pictures. This particular glacier is formed right on top of a volcano. The dark colored dirt is actually volcanic ash that is being exposed as the ice melts. 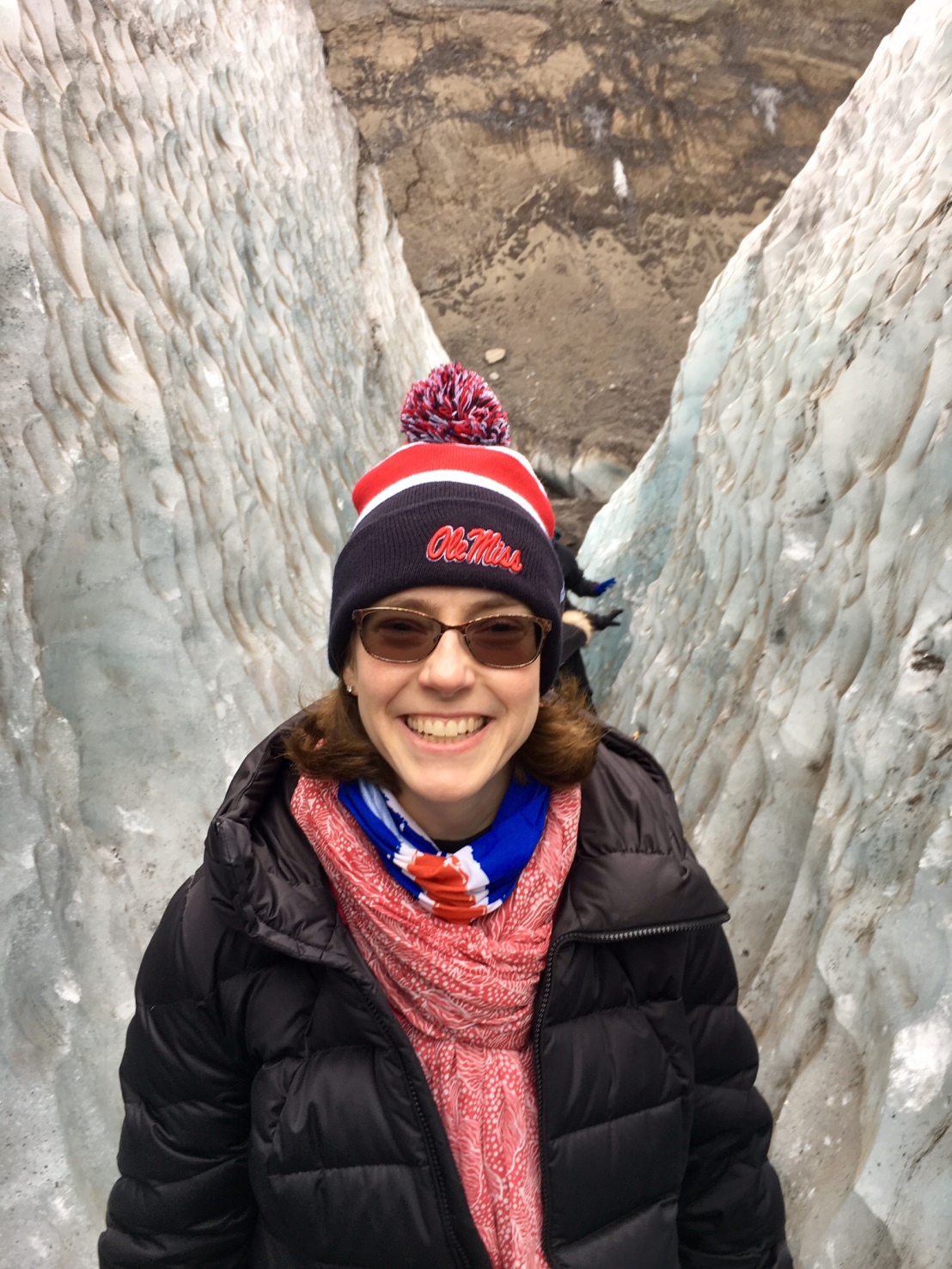 Here you can see Jana is actually standing inside one of the larger cracks in the ice. There were others that we had to jump across.

Very strong winds whip the water and the volcanic ash around into an angry swirl that eventually forms ice caves:

Fortunately for us, the wind had more important places to be the day we were there. Here are some pictures from the top of the glacier: 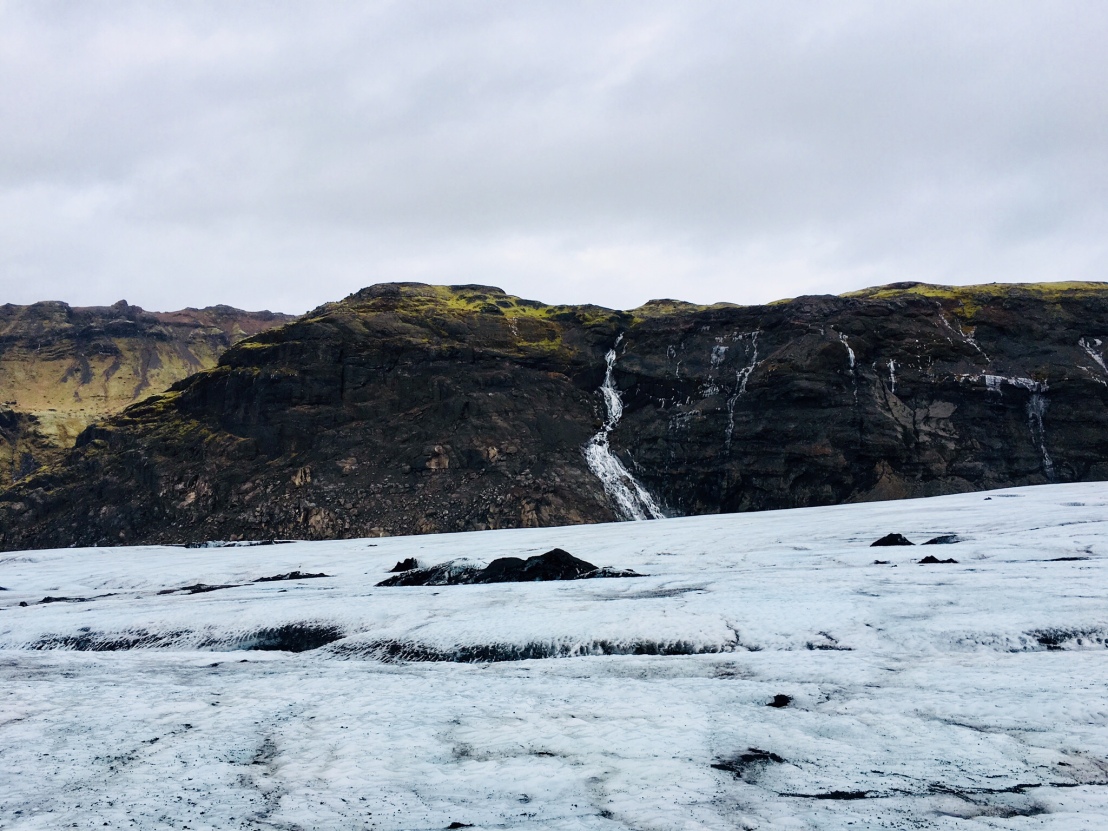 And here is one from the top looking back the way we came:

The river you see is primarily the blood of the glacier, the melted ice. Look to the left and see some really crazy folks getting ready to climb down into that huge cavern. What’s worse is they also have to climb back up! 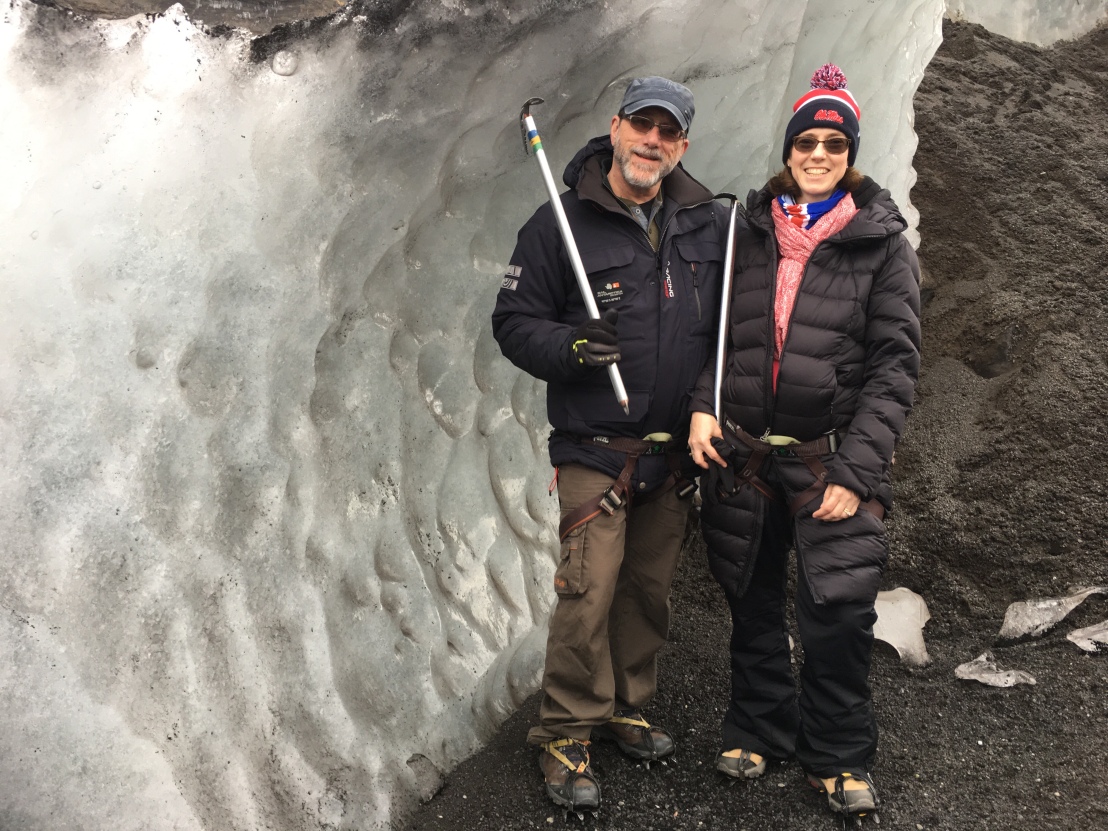 So that was pretty much it for our Iceland trip. We were here before about five years ago and it was just as much fun as this time. Iceland is a very special place that has to be visited to be understood.

*: The northern lights are notoriously difficult to photograph. Thus, the pictures of the actual northern lights in this article were taken by the professional photographer that was provided by our host. You can visit their Facebook page by searching for superjeeps.is.

One thought on “Iceland”