This was our third tour through the UK and surrounding area but the first time as the Travelin’ Man. We were here with our good friends, Bryan and Melissa. They came all the way from Los Angeles. That’s a whopping eight hours of jet lag! Being that Jana and I are living in Sweden, we struggled with our own one hour of jet lag…

We arrived in London, where we stayed for six days. There is so much to see and do here. And we did A LOT! But London wasn’t the end of the tour. We then rode the train to Bath, where we spent the day taking in the sites, then we flew from there to Edinburgh, Scotland. Bath and Edinburgh are covered in separate articles. This article covers our stay in London.

The Food in London 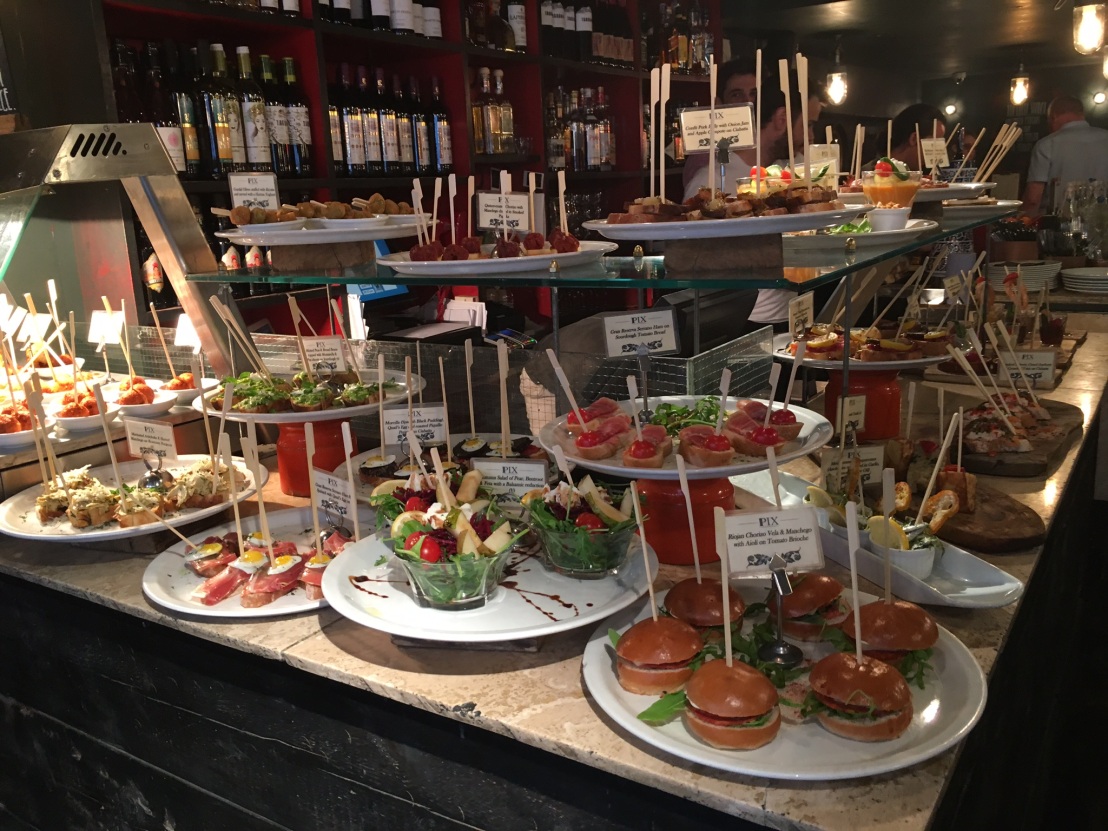 Some people may not care for the food in England. As The Travelin’ Man, I have been extremely lucky to have been to so many places, seen so many amazing things, and eaten so much good food.

But honestly, I LOVE THE FOOD HERE! I love fish and chips, bangers and mash, hamburgers, and all the great pies here!

We even did a food tour through SOHO. Check this out, a fish and chips taco!

This place shaves the ham right off the flank while you watch – love it!

And what’s not to love about “afternoon tea”? 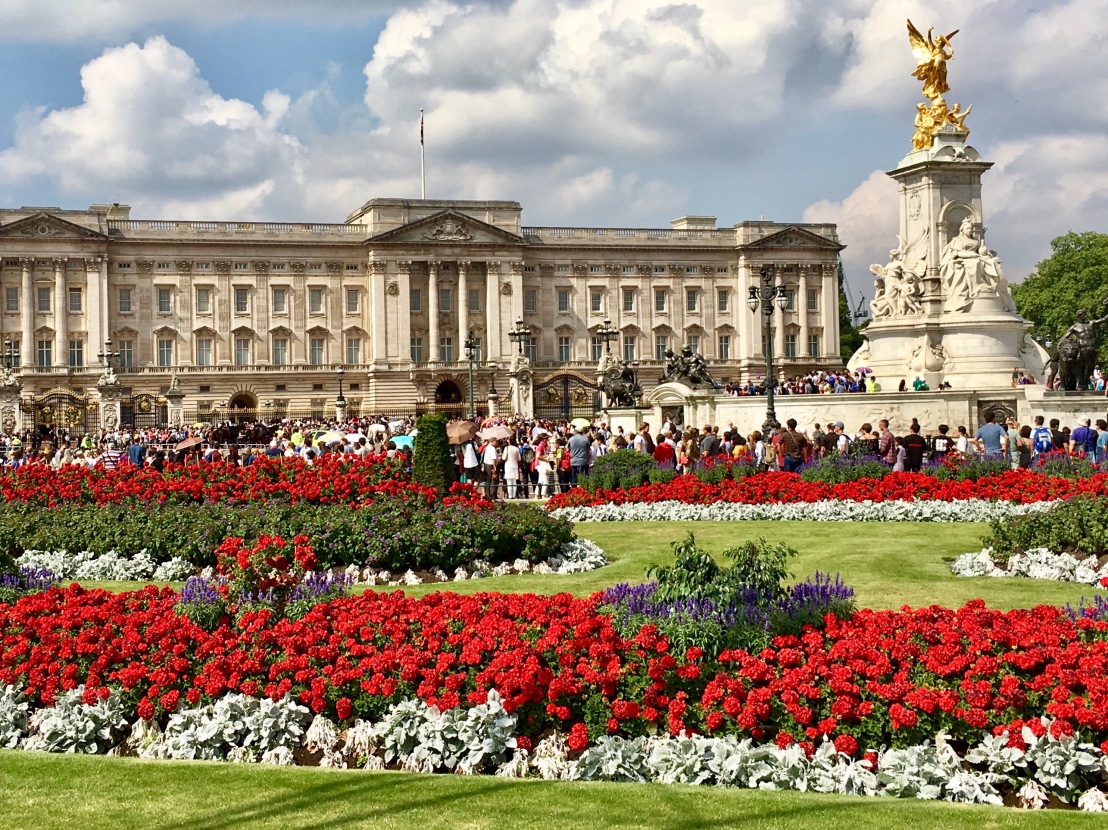 But at least they threw us a small parade while we there.

This was spectacular! It offers a magnificent view of London. It’s not a scary ride at all. In fact, the thing moves so slow that you hardly even notice. Buy your tickets online and you get fast-tracked in with no waiting (thanks Jana!). Otherwise, plan on an hour or two standing in line.

Here are a few of the pictures I took while on the ride: 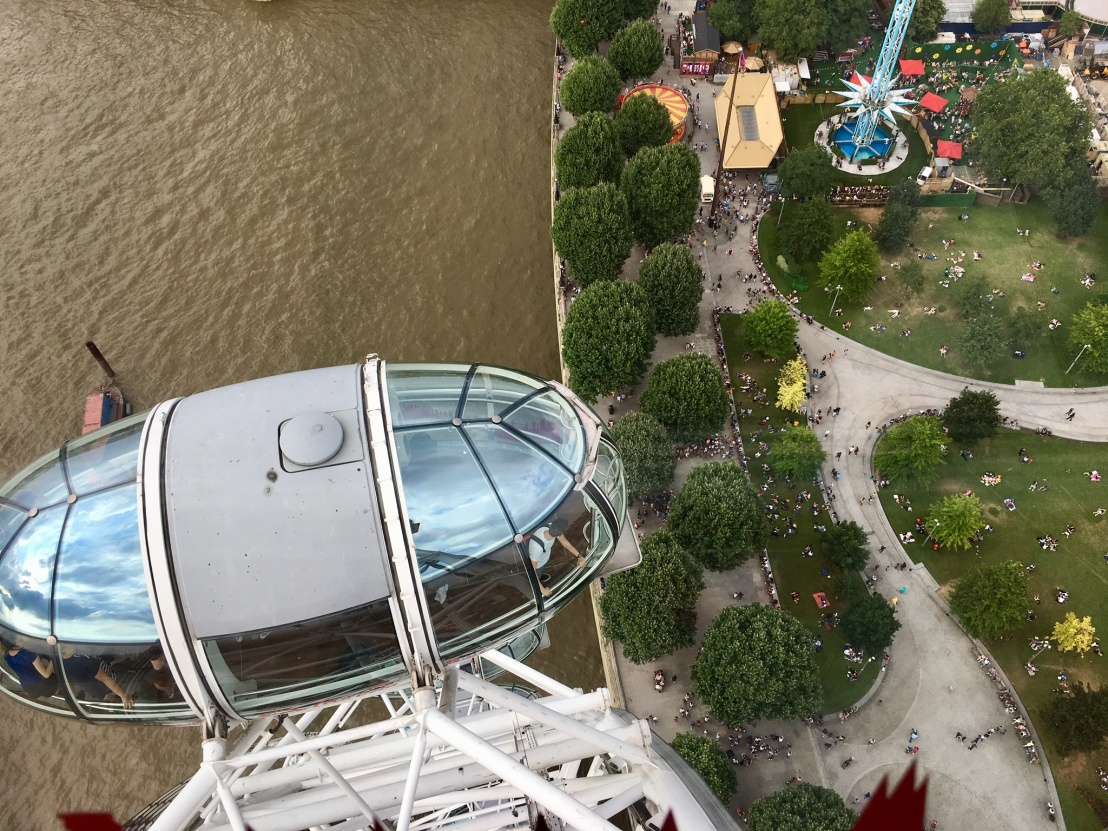 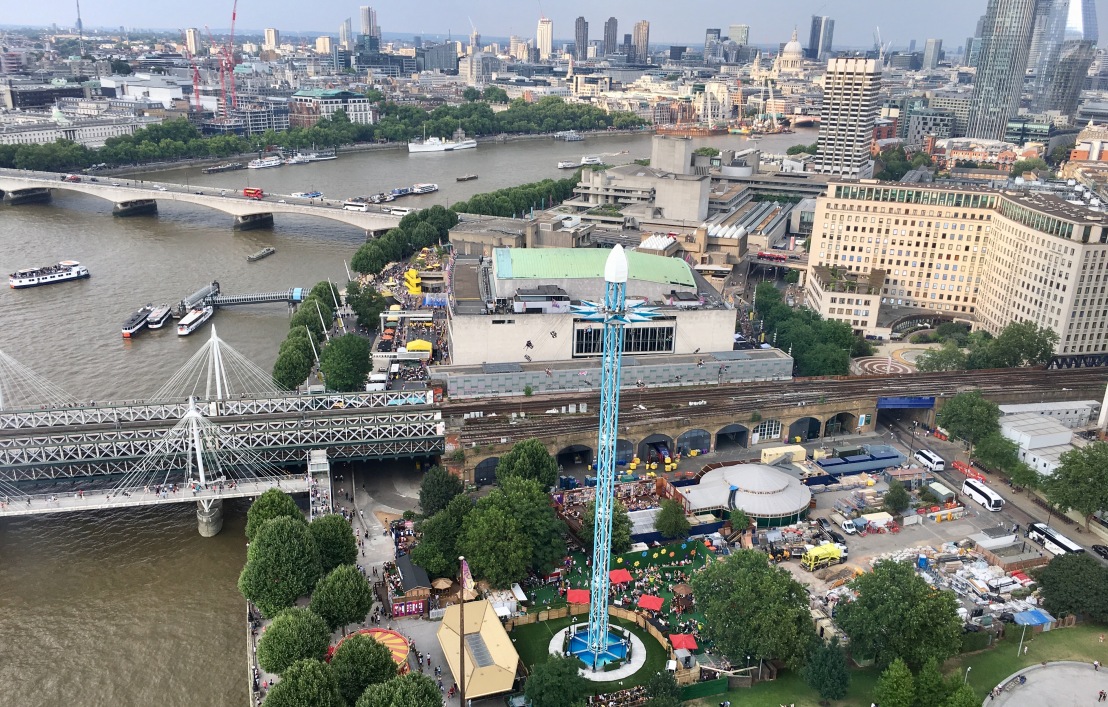 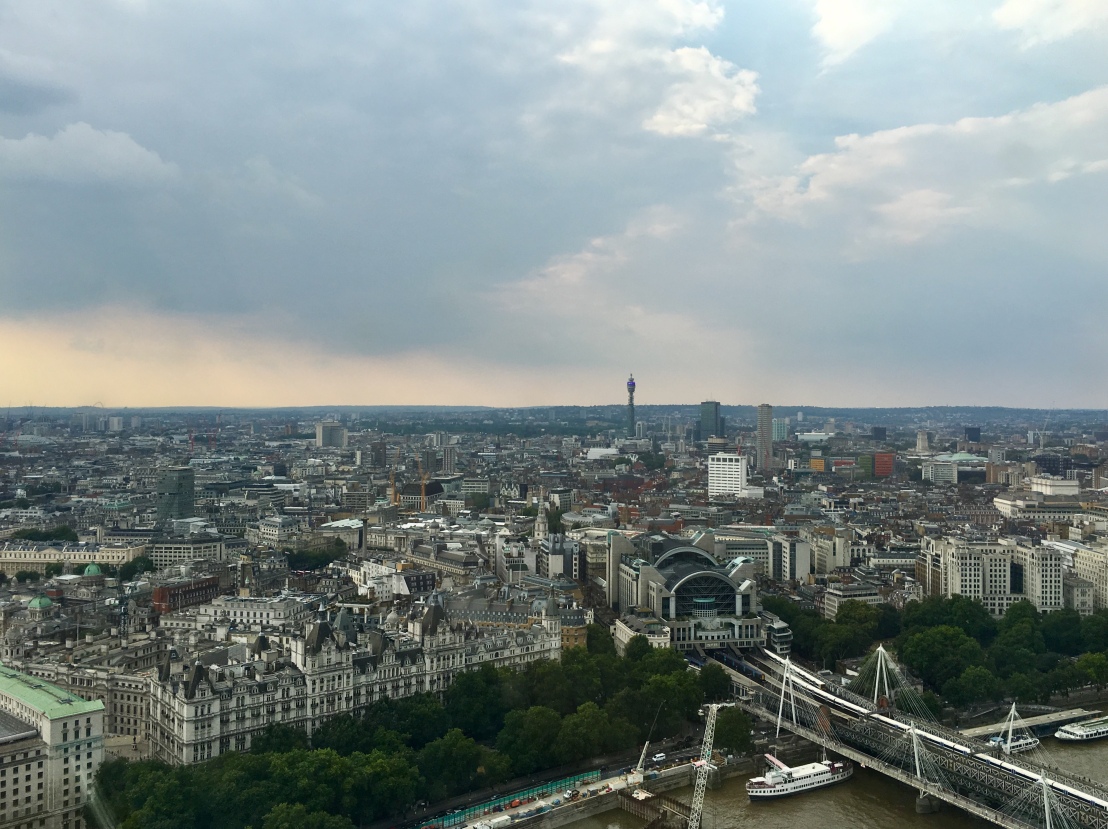 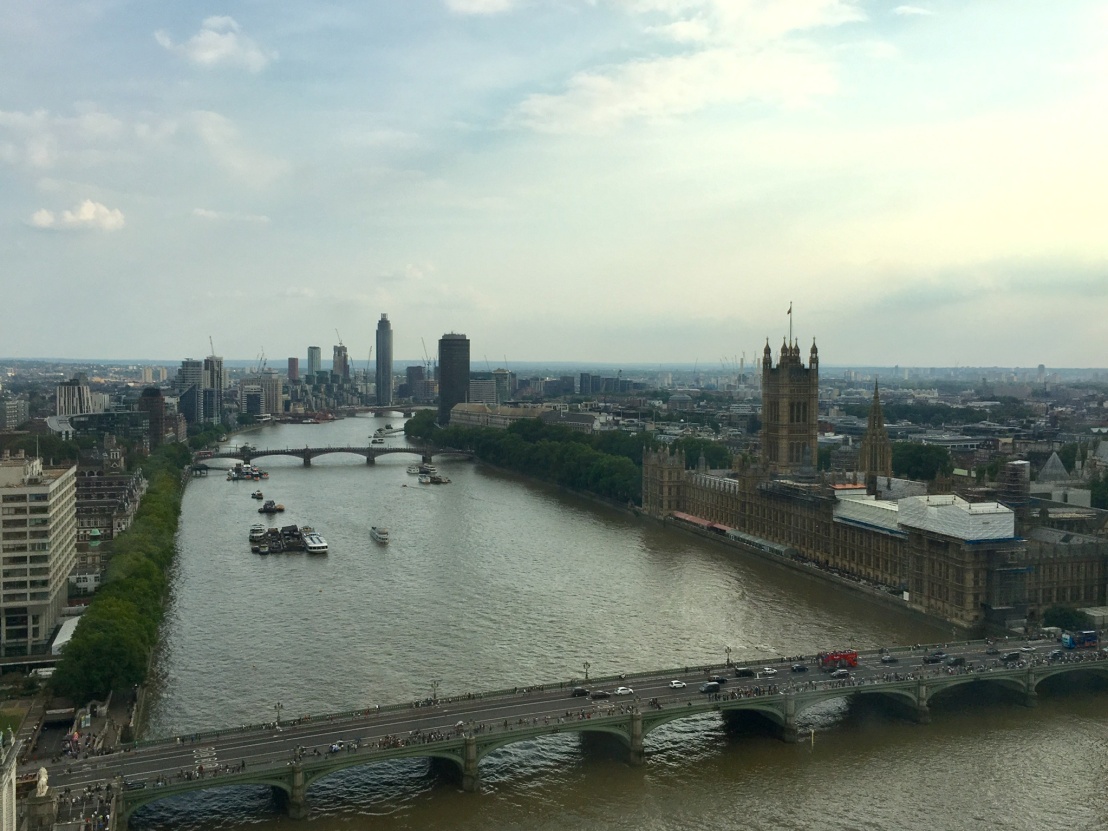 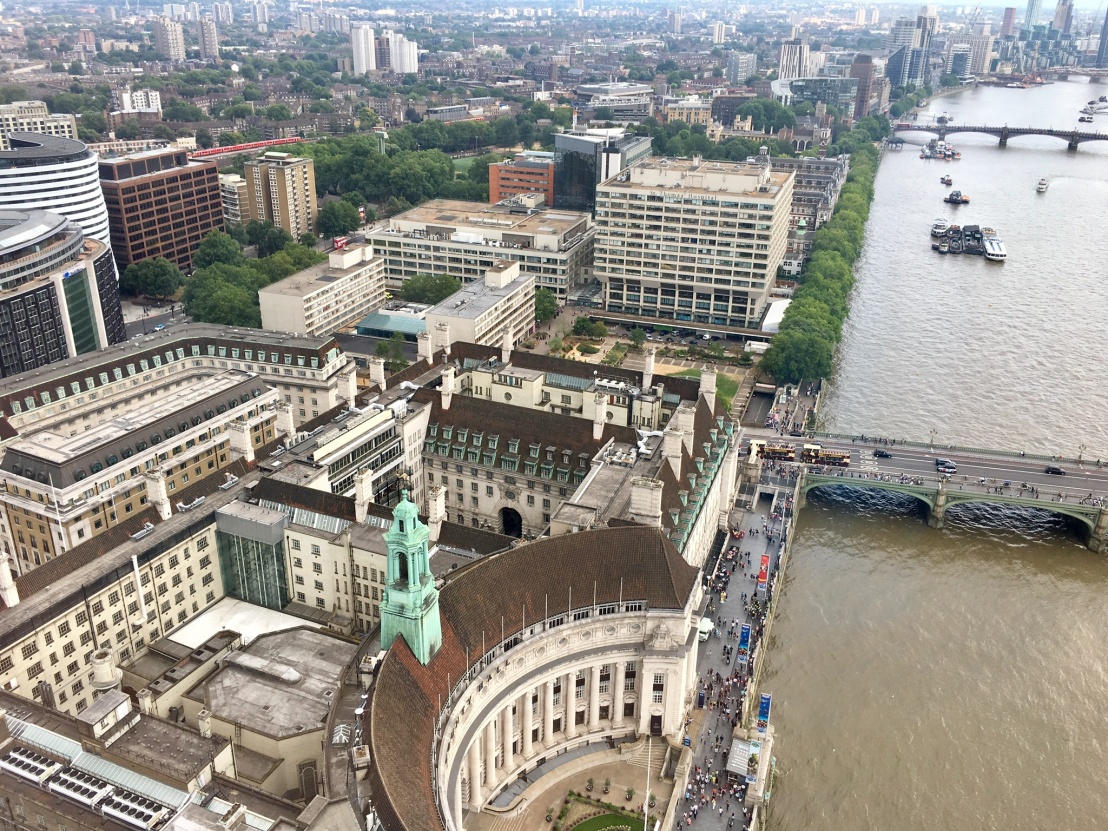 This is another MUST SEE attraction in London. This is, of course, where Churchill continued his coordination of the war against Hitler while London was being bombed. The entire place is preserved nearly “as is” from when they abandoned the bunkers following the end of the war. I must apologize for the photo quality; everything is behind a wall of glass, creating a terrible, unavoidable glare on some of the pictures. I included them anyway because I wanted to give you a feel for what the place is like. 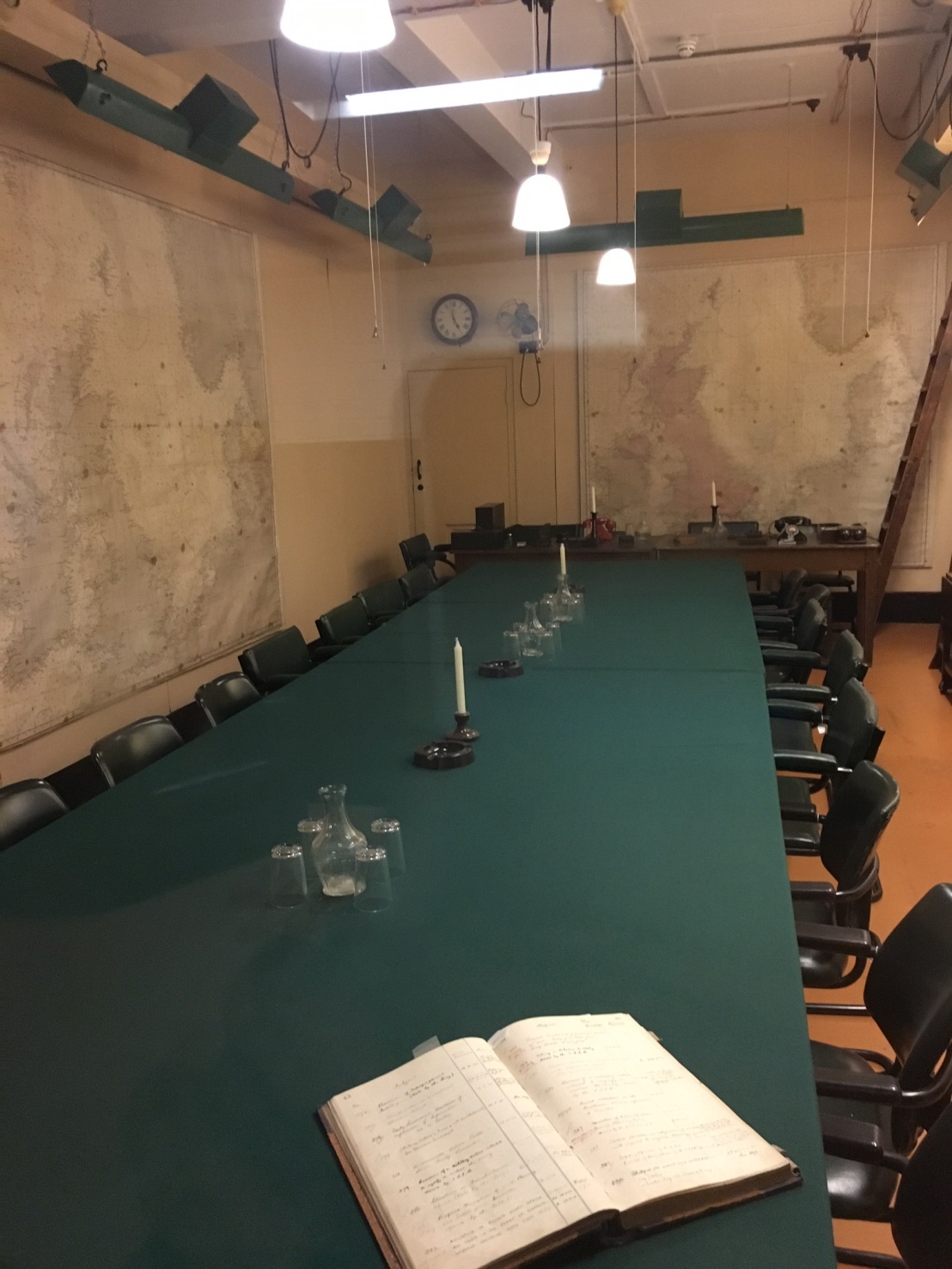 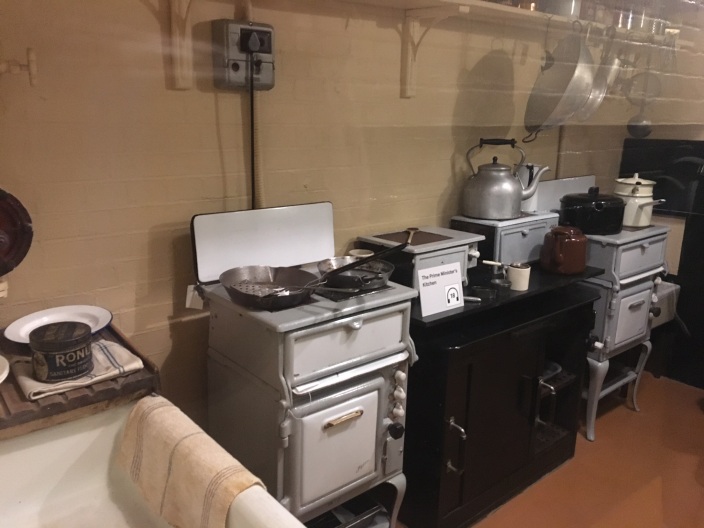 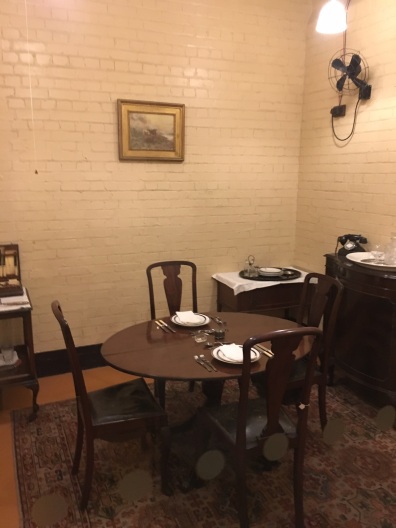 Shakespeare at the Globe

Ah yes, to be or not to be…. This was a fantastic production of Hamlet. The Globe presents it as it was back in the day. 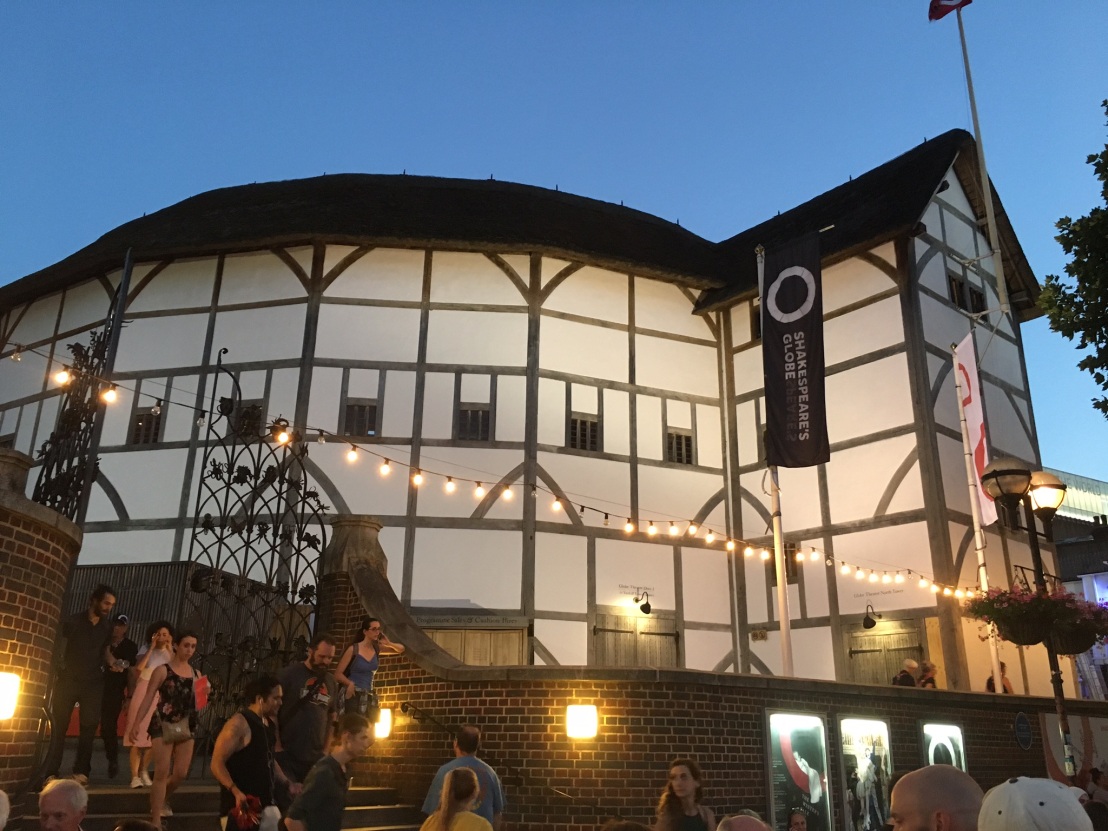 That is to say, the people that are standing out in front of the stage, the tiered seating, minimal props, and no electronics such as lighting or microphones used during the performance. It was a good show – highly recommend.

We swung over to Greenwich to see the observatory, museum, and of course the world famous Meridian Line (aka Prime Meridian). The point is known as Zero Longitude and it is the line from which all other lines of longitude are measured.

And there’s our friends, Melissa and Bryan sharing a zero degrees kiss. 🙂

This is also the home of Greenwich Mean Time (GMT). This is THE time zone of all time zones, this is ground zero. 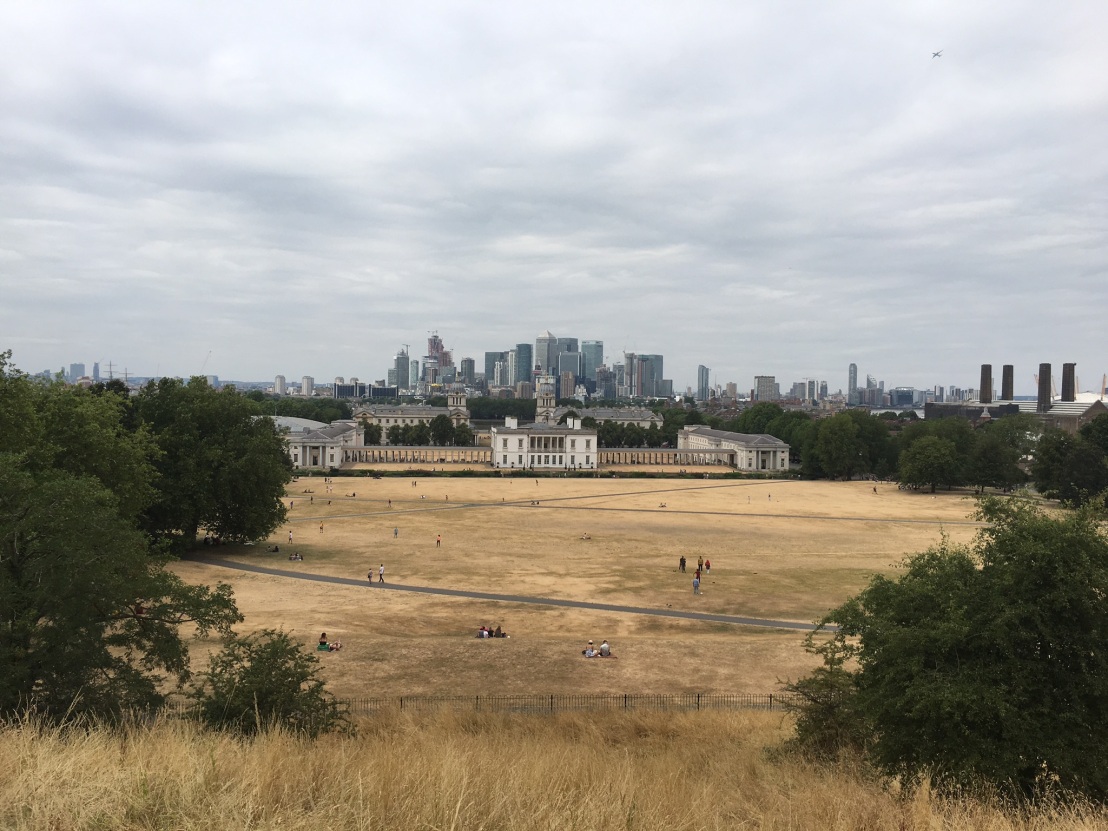 The observatory sits atop a big hill just east of London and south of the Thames river. And it affords quite a nice view of London (above). Except of course, the grass is supposed to be green this time of year. Horrible heatwave and drought in Europe this summer.

How does one even begin to summarize London? The list of things to see and do seems endless.

It’s definitely more unique in the sense that it does a beautiful job of melding the old with the new. Even just that one picture, above, the hi-tech architecture of the Shard offset with medieval church. 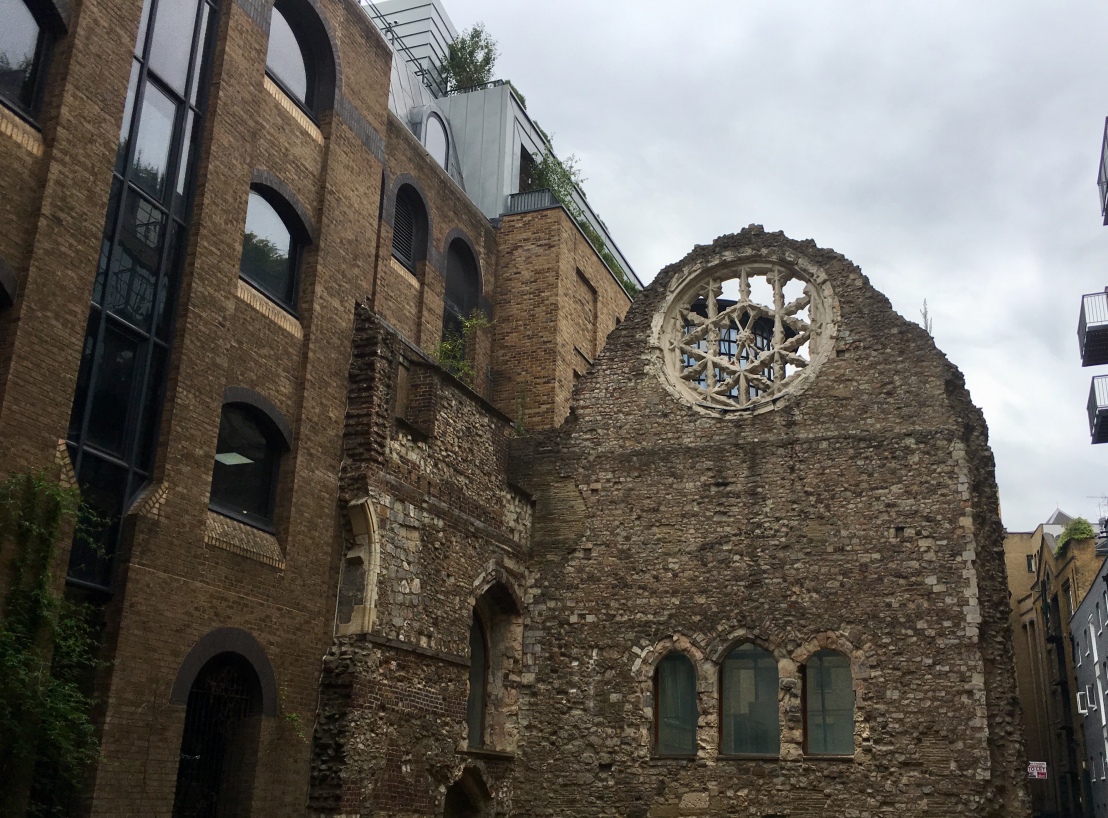 Here’s another great example. This is located almost in the middle of this great, modern city (see above). This is the ruins of one of the most important buildings of medieval London. It was the palace of the Bishops of Winchester. Many great events occurred here throughout history. For example, James I of Scotland and Joan Beaufort were married in almost this exact spot in 1424.

Oh and I almost forgot…the last night we were in London, they started filming scenes from an upcoming Men in Black movie. It was awesome. This was literally right outside the door of our hotel: 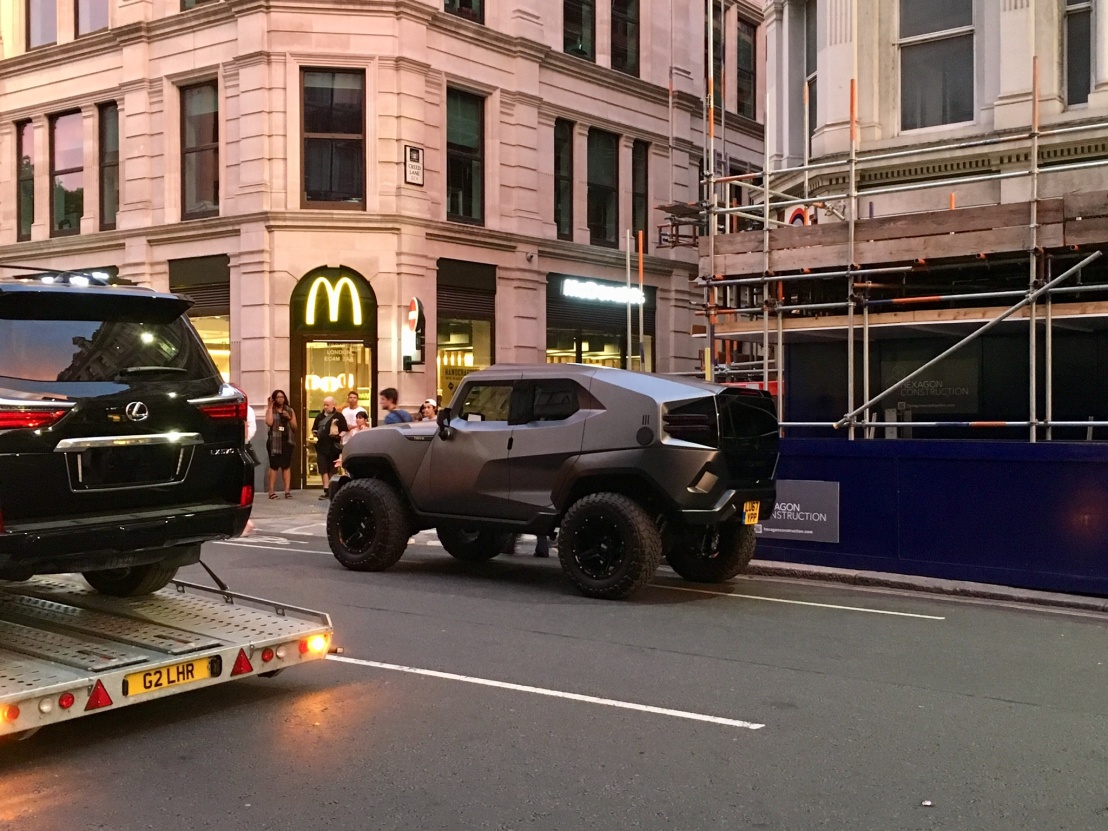 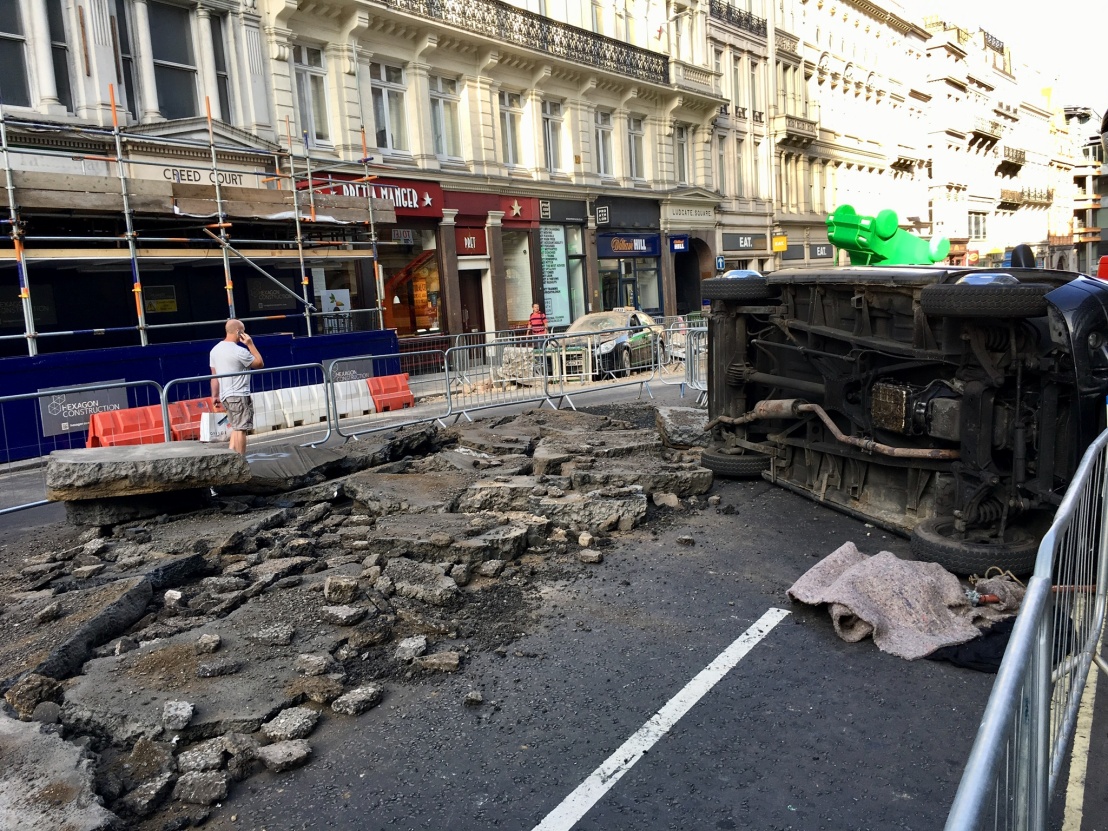 Once we left London, we went to a ton of other places, like Wimbledon, Edinburgh, and Stirling Castle just to name a few. On the site, just click on DESTINATIONS then select either ENGLAND or SCOTLAND to see the places we went. We really enjoyed our UK tour with our good friends Bryan and Melissa. It was a heck of a vacation, and lasted a full two weeks. We did a lot. And I have to say, even The Travelin’ Man is a wee bit tired after this one, but it’s a good kind of tired, ya know?

Our next adventure will be in a couple of weeks on an island a little west of here; we will be traveling with our good friend Brandie as we tour through Ireland! We are even renting a car and doing the Great Irish Road Trip. So stay tuned to The Travelin’ Man at jcmarxblog.com.