This was The Culinary Experience Tour.  It covers about 4 km (2.5 mi) over about 4 hours and has seven tastings. The tour costs 850 ddk ($135). The tour starts and ends at Torvehallerne, which is the new covered market areas.

Our guide was Birgitte, and she really rocked it. She was very knowledgeable about history, landmarks, and the restaurants, and she had an energetic and friendly style.

See the two pictures above that detail the names and addresses of all the places we went, as well as a map of the tour, which was primarily around central Copenhagen.

We met outside the Torvehallerne market area. Birgitte gave us a very informative historical perspective on how the covered markets came to be here, and the impact of their presence on the local area.

Once inside, we went over to a an artisan cheese maker called Arla Unika. The cheeses were exceptionally good, but especially the blue cheese. I’m not a big fan of blue cheese, but I must say this stuff was exceptional. I never had a cheese melt in my mouth like that. BirgitteExplained that part of the secret involved using a yogurt base. The fruit wine that accompanied the cheeses did a good job melding with the flavor of the cheeses. So yes, a very small plate, but what a grand tasting!

Next, we stepped over to the cheese house Bornholmer Butikken, which specializes in products from the island of Bornholm, Denmark. Of special note was the black licorice. Even folks who don’t care much for the stuff seemed to enjoy it. Very mellow, with a smooth, sweet aftertaste.

We walked through a beautiful area in the center of Botanisk Have (Botanimal Garden). Birgitte Got out some locally produced honey and some taste sticks. Once you taste this pure golden honey, you realize how corrupt all other honey is! It really was that good folks.

As you can see in the pictures, it was a bit overcast. It did, in fact, rain a couple of times while we were walking, but we had a lively crew that was unwilling to let a little rain spoil the fun.

After the Botanical Gardens, we walked to Aamanns Deli. This was a sit down stop. The deli itself was quite cozy, and there were a few local folks inside enjoying a meal. Birgitte brought out a platter for each of us that had four small open face sandwiches (called smørrebrød). These are quite popular in Copenhagen.

The idea behind smørrebrød is to combine a variety of meats, vegetables, and other ingredients to produce a new, unique flavor. Different restaurants and deli’s all have their chefs trying to create the perfect taste combination that the locals will discover and flock to. And of course Aamanns was doing quite well at this.

Now with substantial food in our bellies, we crossed the canal and ventured through the uppity neighborhood of Jens Juels Gade. Birgitte gave us the history of how it was once a slum of sorts, with each house containing three or more families. 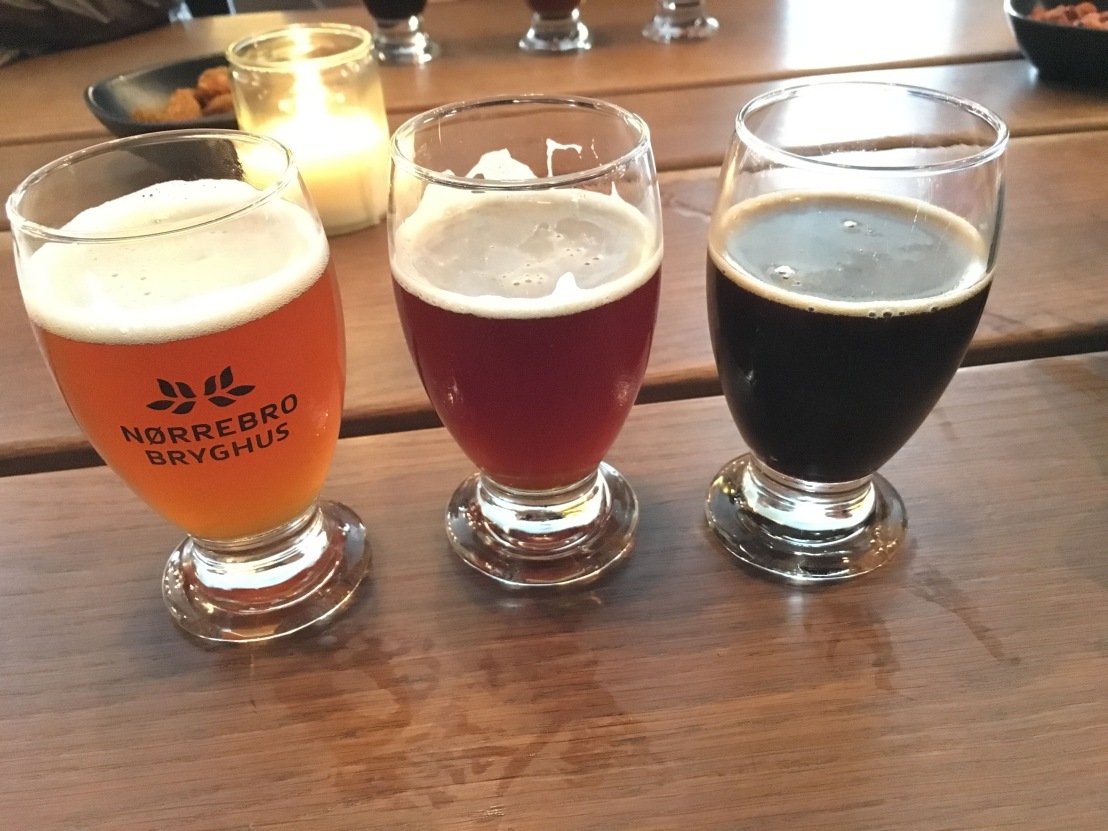 The next stop, also a sit down, was at the Nørrebro Bryghus Danish microbrewery. Here we each got a light, med, and dark ale to sample. I liked all three of them. The dark had a unique, lasting flavor to it. My favorite was the middle one. Rich and full, but not as heavy as the dark one and more robust than the light. Yup, I finished all three of mine!

Now the next place just doesn’t sound real fancy, and there is no way for me to sell in that way no matter how hard I try, so I’ll just come out with it; it was a street stand that served gourmet hot dogs. See, I knew that was going to be tricky.

But seriously, you get to pick the type of wiener/brat, bun type, and any fixings. I got to tell you folks, short of my own backyard, these are the best hot dogs I have ever tasted. I later realized that I had forgotten the name of the place, so we went back a little while later, and they had vanished….like it never happened.

What better way to finish up a great food tour than with some candy. We headed over to Sømods Bolcher (candy maker). We sampled some hard candy and some carmel, all was melt in your mouth delicious. They make the candy the old fashioned way and even use old original equipment from the turn of the century.

Then we finished up where we started, back at the food market.