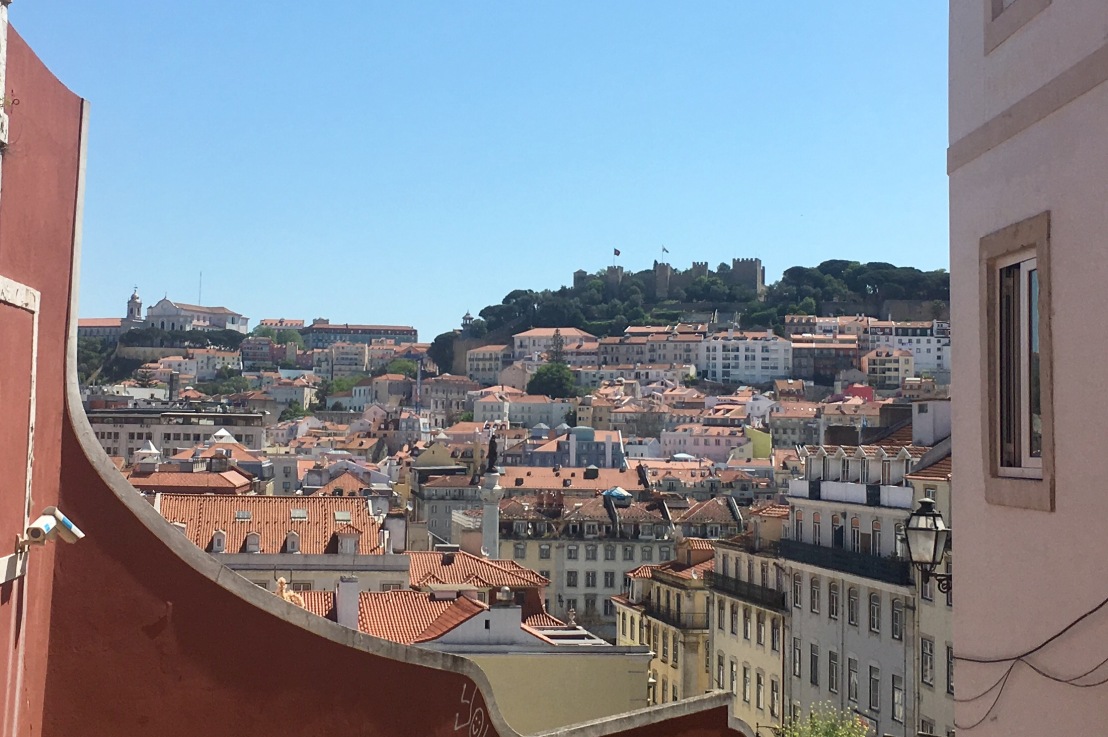 A marvelous old European city chock full of art, statues, and kaleidoscope views. Magnificent castles, palaces, and towers dot the landscape almost everywhere you look. This is a city whose existence dates back to somewhere around 1200 B.C. Easily one of the oldest cities in the world. Older than Paris, London, and even Rome itself. It would require volumes upon volumes of five inch thick books to capture all of the history of this city. 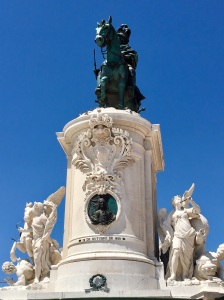 Conquered and occupied by all of the dominant factions and armies along the way. In the early B.C. era, these included Germanic tribes, Phoenicians, and the Indo-European Celts. Later by the Romans of course, leading into the Middle Ages. In the 8th century, the city was conquered by the Muslims, whose occupation continued through the 12th century when they were conquered by the Norwegian crusaders.

In more modern history, the country of Portugal battled against Spain for its independence, and later fought within itself to end the Portuguese monarchy.

The city has struggled throughout time with devastating earthquakes. Then, in 1755, the mother of all earthquakes hit, followed by a devastating tsunami that triggered massive fires. Over 85% of the city was destroyed, and tens of thousands of citizens perished. At that time, Lisbon had grown to be one of the largest and most prosperous cities in Europe. The impact of the tragedy of 1755 sent shockwaves of awe throughout the world.

All of this means that Lisbon has survived its past and thrived to become the great, cultural and artistic city it is today. 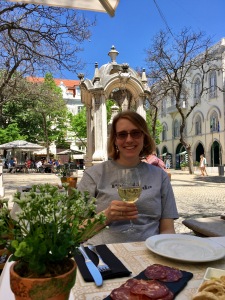 The weather while we were there in May was warm, sometimes even a little hot. But the evenings were still cool enough to warrant a light jacket or sweater. Clear blue skies and no rain in sight!

Cozy outdoor bars and restaurants abound, allowing you to unwind and relax in the center of the city’s historic beauty.

Perched on the mouth of the Tagus river that feeds into the Atlantic Ocean, the food specialty in and around Lisbon is seafood. Seafood here is part of the culture.

Some of the restaurant culture here is different than what we were used to. For example, we went to one place where we had made a booking, and the door was shut and locked. There was a sign that simply said, ‘Ring Bell.’ Which we did. The door slowly opened, and the host asked if we had reservations. When we said we did, he let us in and closed the door behind us. On the inside, it was a perfectly normal and nice restaurant.

At this other place we went to, Cervejaria Ramiro, there was a mob of people standing around the street in front of it. We muscled our way through and got almost inside. We were told to pull a number from the machine and wait until our number was called. ‘But we have reservations,’ we said. It didn’t matter, get the number, and step aside. So we got our number and joined the masses out front.

Occasionally, a strange, synthesized electronic female voice would call out a number over the loudspeaker. But it would be something crazy, like 200,615. She would repeat the number about five times. Our number was 5667. Then she would call number 874. So we figured it must be some sort of a lottery. They generate a random number, then call it out, if it’s your number, you get in!

Jana and I were fortunate enough to be able to hook up with our friend, Marie. Marie is from New York. So in addition to spending some great times with our friend, we got all caught up on the happenings back in the states.

So Marie has decide this isn’t going to work for us. She pulls up the email we had received that confirmed our reservation. She muscles her way up to the front again, and insists on talking to the name of the person the email is from, and she showed them the email. The host breaths a loud sigh and gives her the eye roll. ‘Very well,’ he says, ‘come with me.’

We follow this guy through a huge restaurant area that is as loud and chaotic as the New York Stock Exchange. People yelling at each other over the noise, making it worse. Countless hammers smashing open huge crab legs. We round a corner, then follow the guy up a very narrow set of steep stairs. We get to the top and, voila, a quiet, cozy, somewhat small restaurant seating area with a great view of the madhouse out on the street!

And the food was OMG! The menu had pictures of the entrees. But it was just a picture, with no perspective on size. So Marie tells the waiter she will have the shrimp as a side item, the waiter responds with a question: Just one? It was a little confusing. Did he mean just one serving, so she said yes.

Nope, he meant just one shrimp! Look at that thing!

Anyway, suffice to say the food was superb at every place we went to, and each one was a new adventure.

This shot, above, is the street that leads into the square. The Comércio square is a must see. There wasn’t much left of it after the 1755 earthquake, so they decided to just tear the rest of it down and start over. 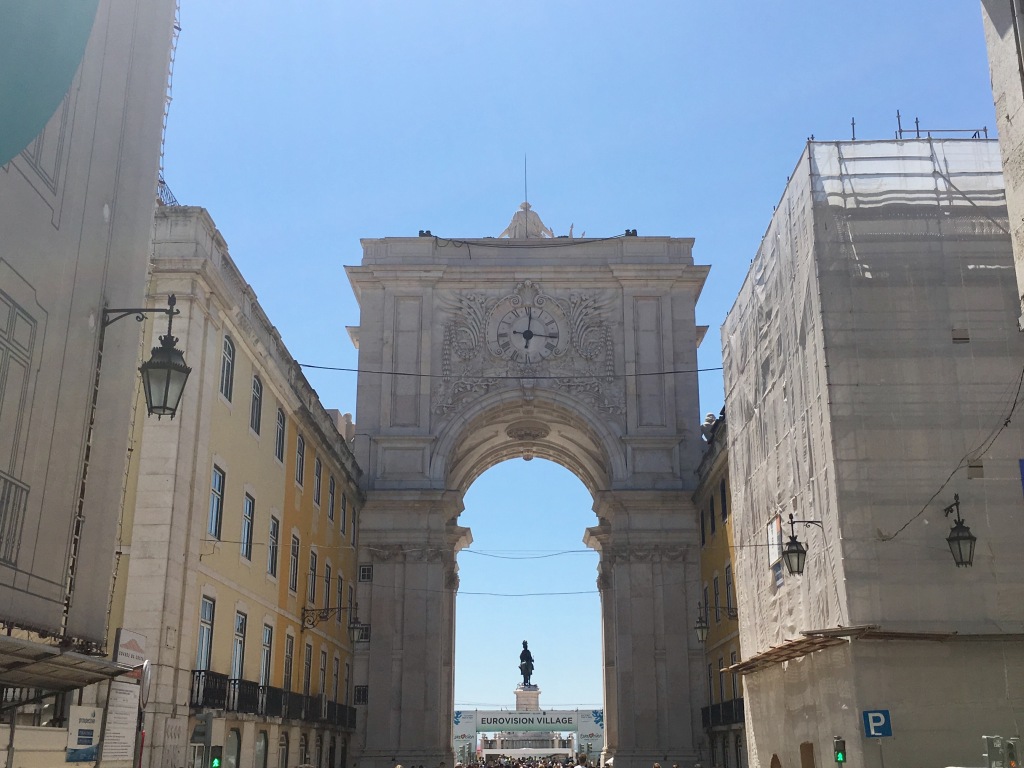 We were there the same week as the finals for EuroVision, which is a huge annual European singing and performing competition. Since Portugal won it last year, they are the host this year. It occupies the entire square. In fact, if you zoom the pic above, you can see the banner for EuroVision on the street on the other side of the archway. 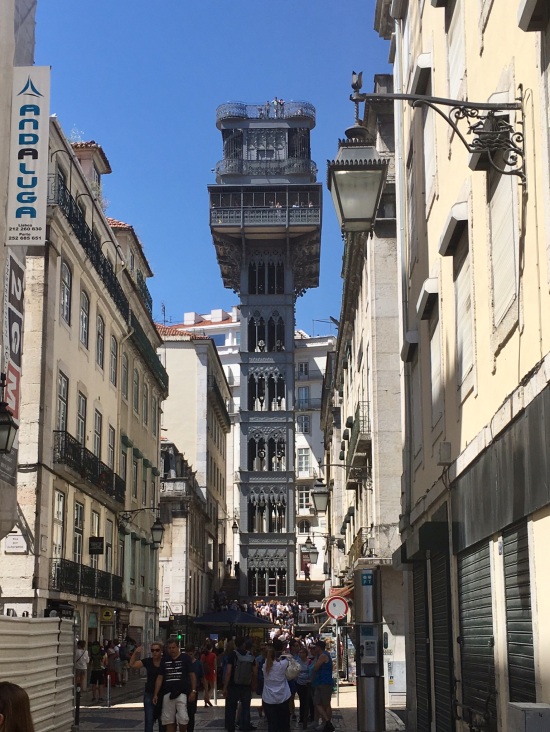 There is just a ton of great things to see and do in this city. There is São Jorge Castle, which we did not visit. Another great square to see is the Rossio square (above left). There is the Santa Justa Lift (above right), which is a famous elevator built in the early 1900’s and has a very colorful history.

We really enjoyed our time in Lisbon, and didn’t even scratch the surface on covering everything is has to offer. All the more reason to come back! While we were in this part of the world, we also visited Belem and Sintra. These are covered in separate articles. And yes, that’s a real bird in the picture, and yes I took the picture. 🙂