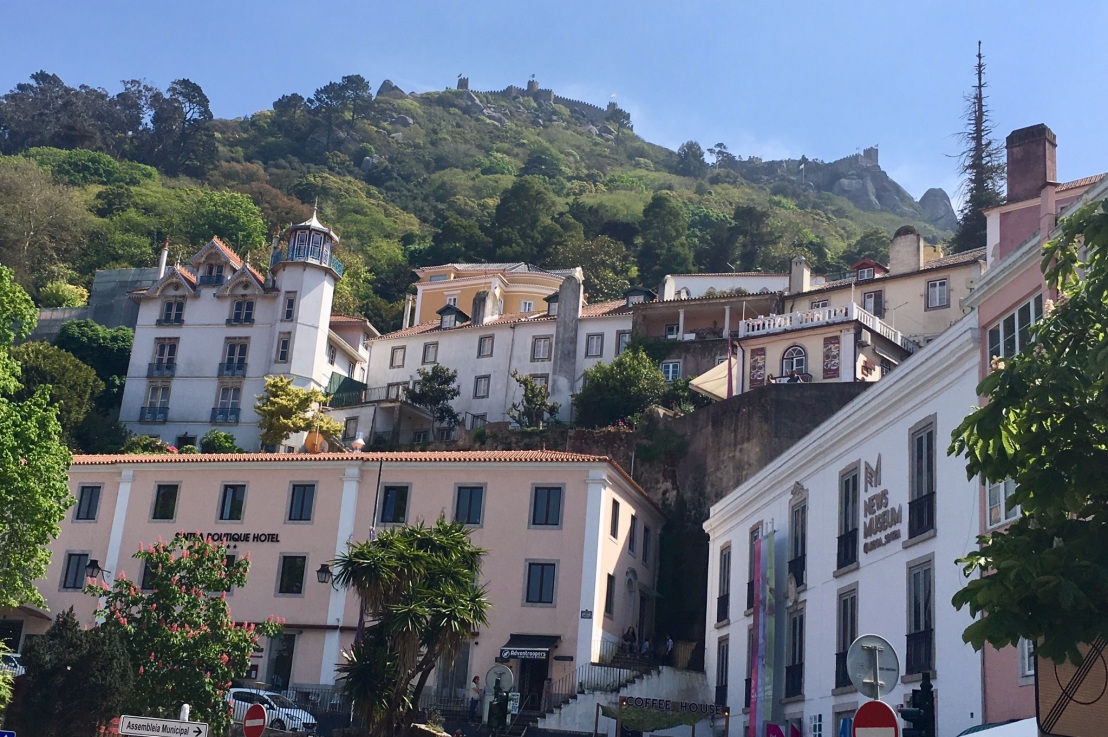 During our vacation in Portugal, we toured with our good friend, Marie, from New York. We all met up in Lisbon, the capital of Portugal. During our stay in Lisbon, we took a day-trip to Sintra. It was a relaxing one hour train ride through the beautiful Portuguese countryside. 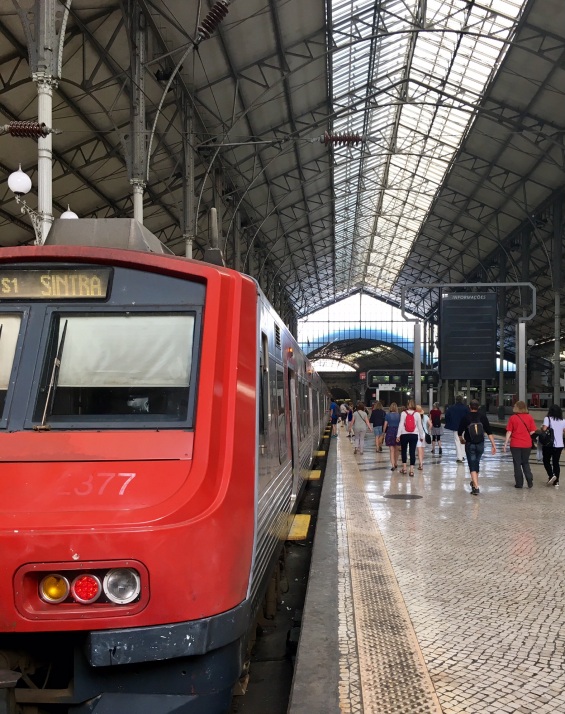 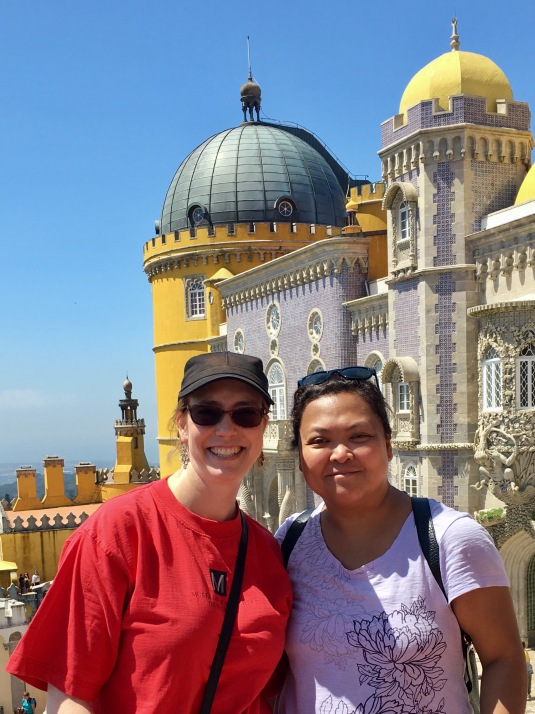 Sintra is a small resort town in the foothills of the Sintra Mountains. While we were there, we visited the Palace of Pena and the Moorish Castle. Both are spectacular sites to see and should definitely be on the top of your list if you are ever in this part of the world.

Spoiler alert: following is some really fine photography! No drones or helicopters were used for these pictures. I don’t even have a selfie-stick. But if I did, I’d be using it to pat myself on the back. But seriously, amazing pictures considering they were all done with just my iPhone. It was also helpful to have such perfect weather! You should definitely be viewing these on your PC or tablet.

The Palace of Pena 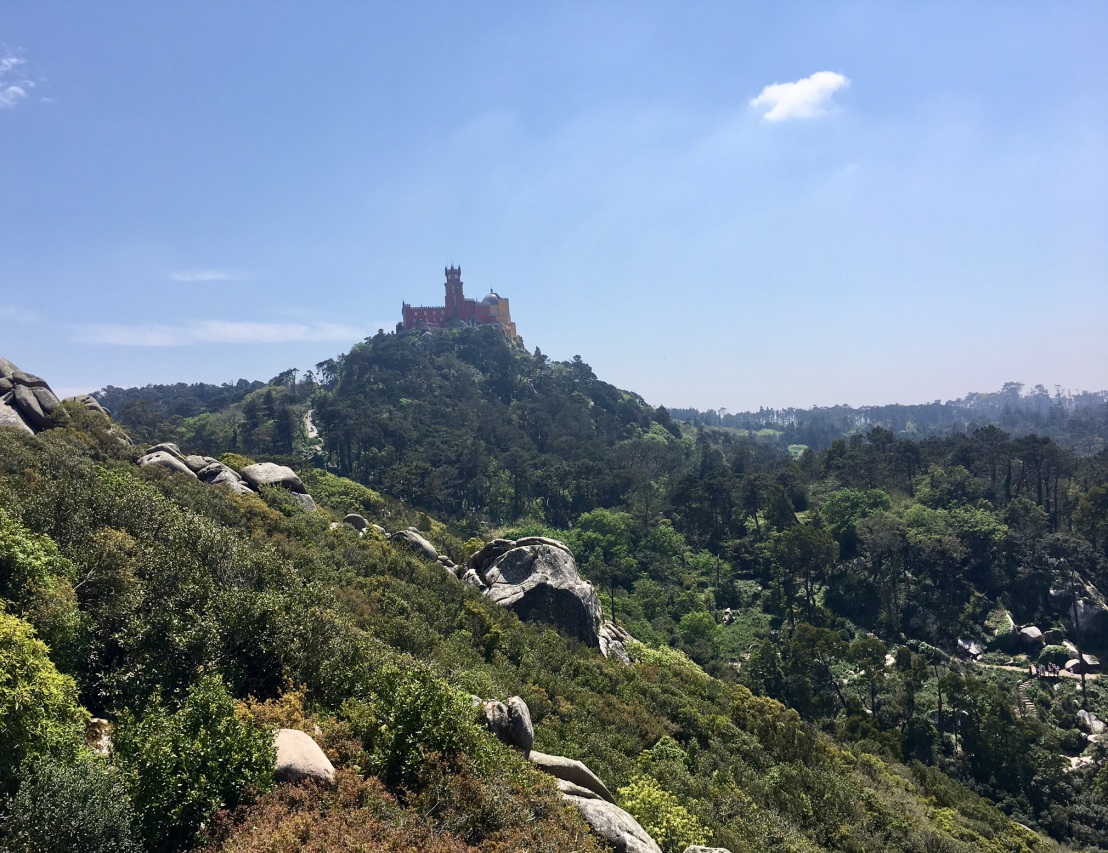 It began in the Middle Ages, as just a simple chapel on top of a mountain. In the 15th century, King Manuel I had a monestary built around the chapel. (I took the above picture by hanging out of a watch tower window at the Moorish Castle. Hey yall, watch this!).

For the centuries that followed, it became a quiet, peaceful place that housed about twenty monks. But the Great Lisbon Earthquake of 1755 reduced the monestary to ruins. All that remained was the original chapel. 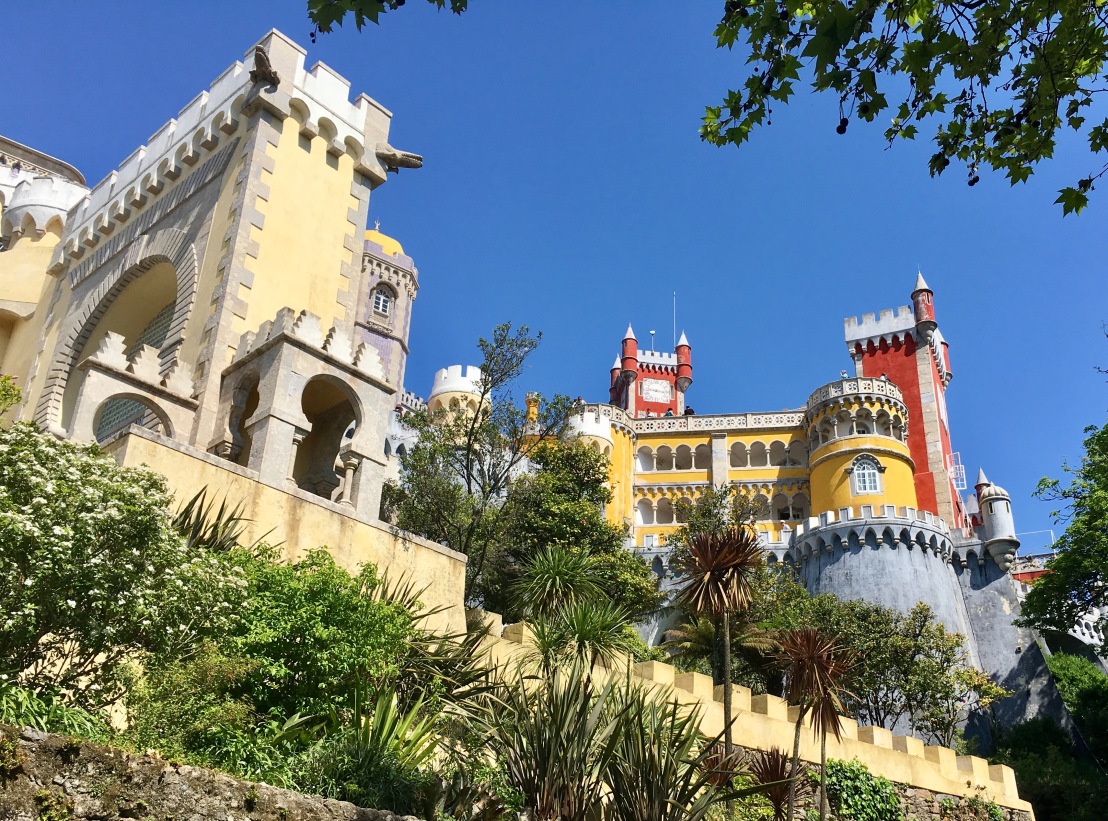 In 1842, King consort Ferdinand II began constructing the palace around the chapel. The palace was to be the summer home for the royal family. Construction continued through 1854. Throughout the construction, he and his wife, Queen Maria II, frequently intervened in the matters of design and architecture of the palace. These choices are clearly evident in the end product. It manifested into a beautiful Ramantic style castle that looks part royal palace and part Disney. 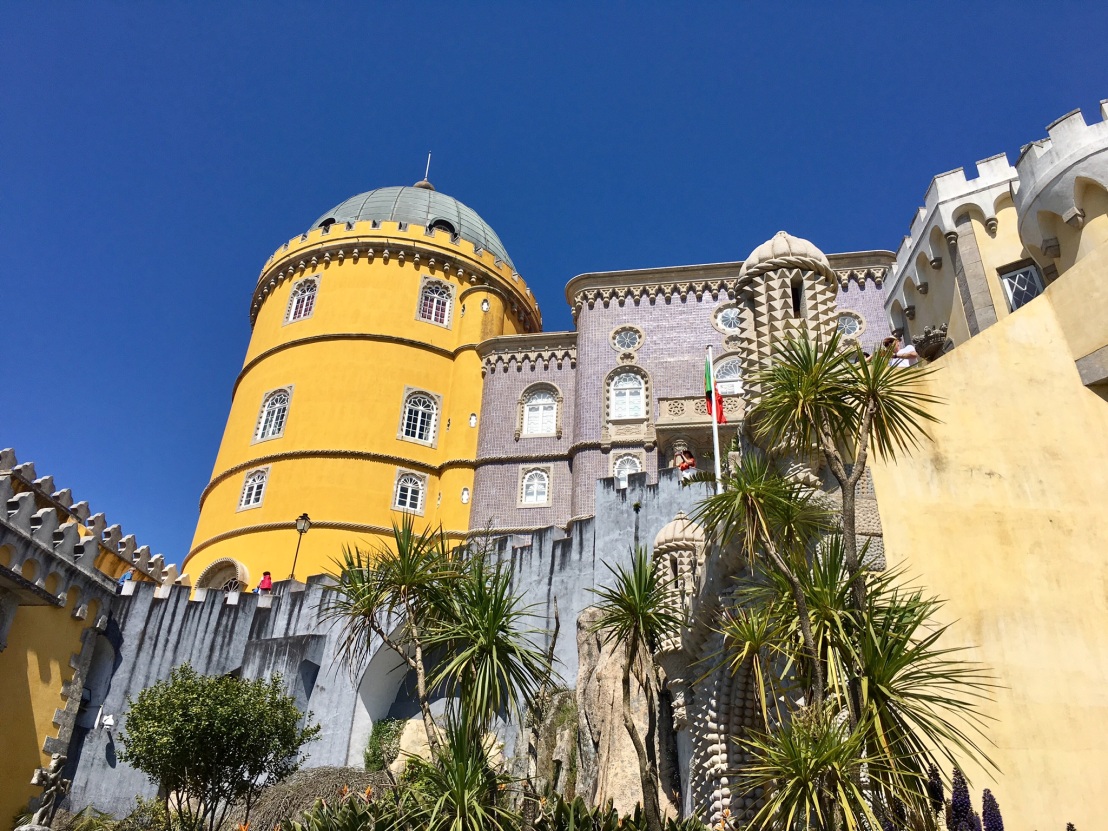 This is easily one of the most photogenic palaces I have ever been to. It has been a public museum since the fall of the Portuguese monarchy in 1910. In fact, the last ruling queen of Portugal, Queen Amélia, spent her last night here, at this palace, before leaving the country in exile. 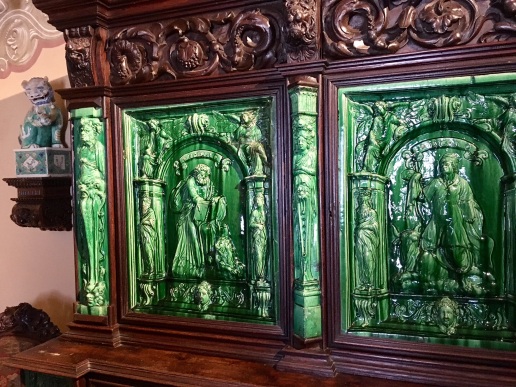 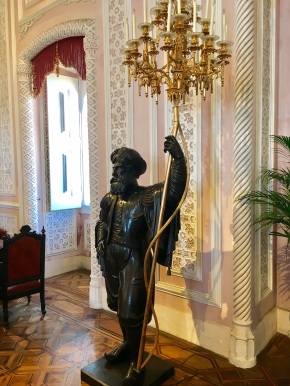 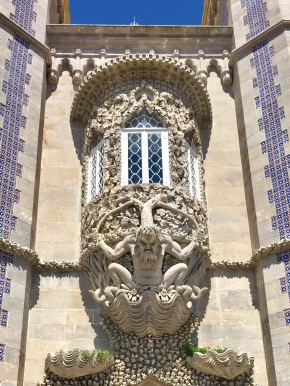 Over the years, this has become one of Portugal’s most visited monuments, and it is classified as a World Heritage Site by UNESCO. 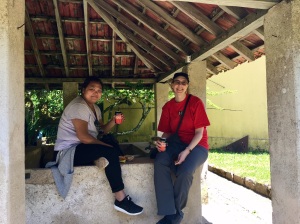 After visiting the palace, we stopped at a cute little cafe and had a light lunch while sitting around the old well. Then it was off to the Moorish Castle! 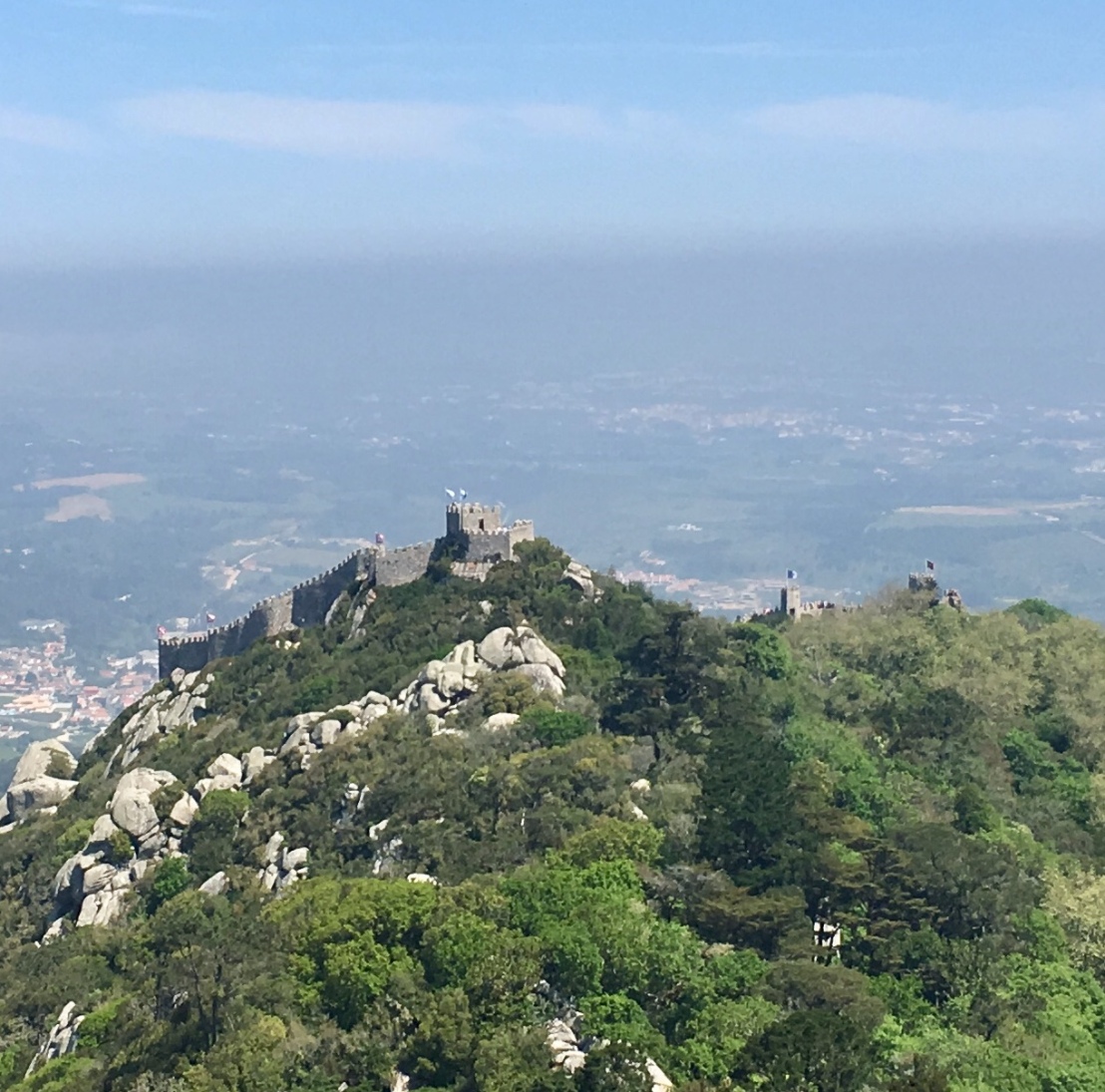 I got the above picture by hanging over the balcony off the Queen’s bedroom in the Pena Palace on an adjacent mountaintop. Worth it.

While the Palace of Pena is one of the most photogenic places I have been to, the Moorish Castle has to be about the most unique castle I have visited. It was built during the 8th and 9th centuries during the Muslim occupation. Not only is it perched high atop a mountain, but it is literally imbedded into the mountains and surrounding terrain. 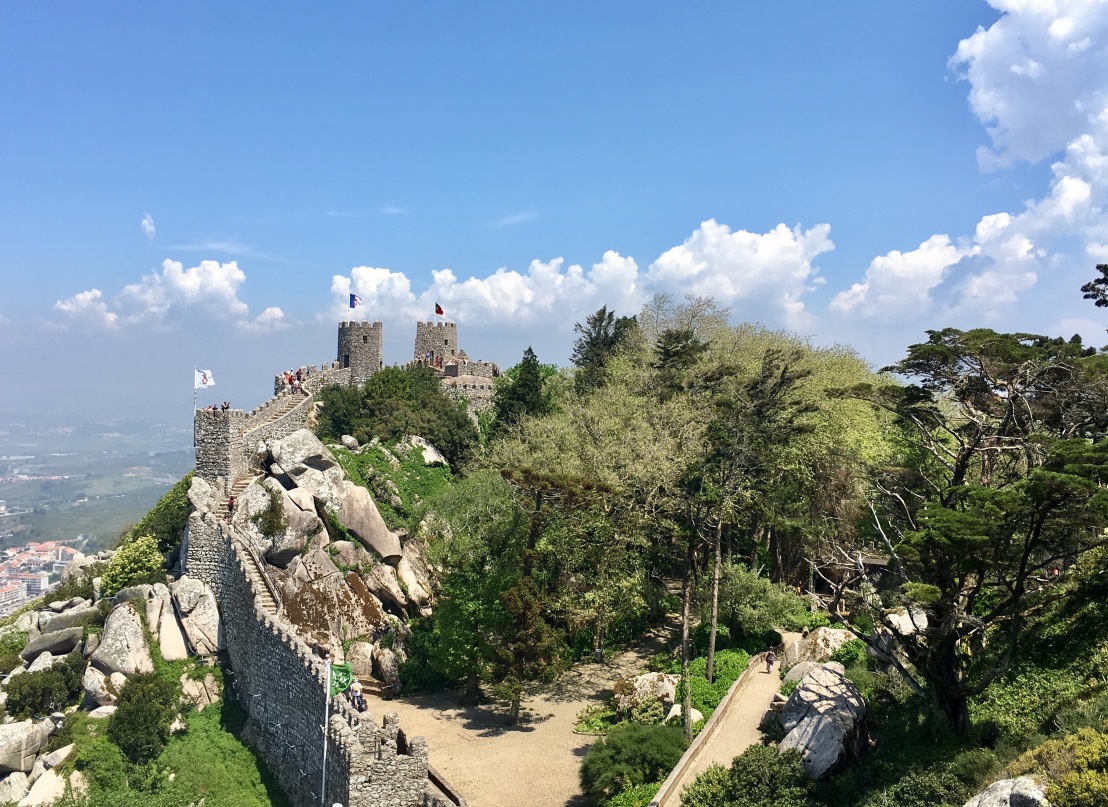 And on the inside, it’s not like a traditional castle with a keep in the middle. Once inside the castle walls, there is a vast, open area. 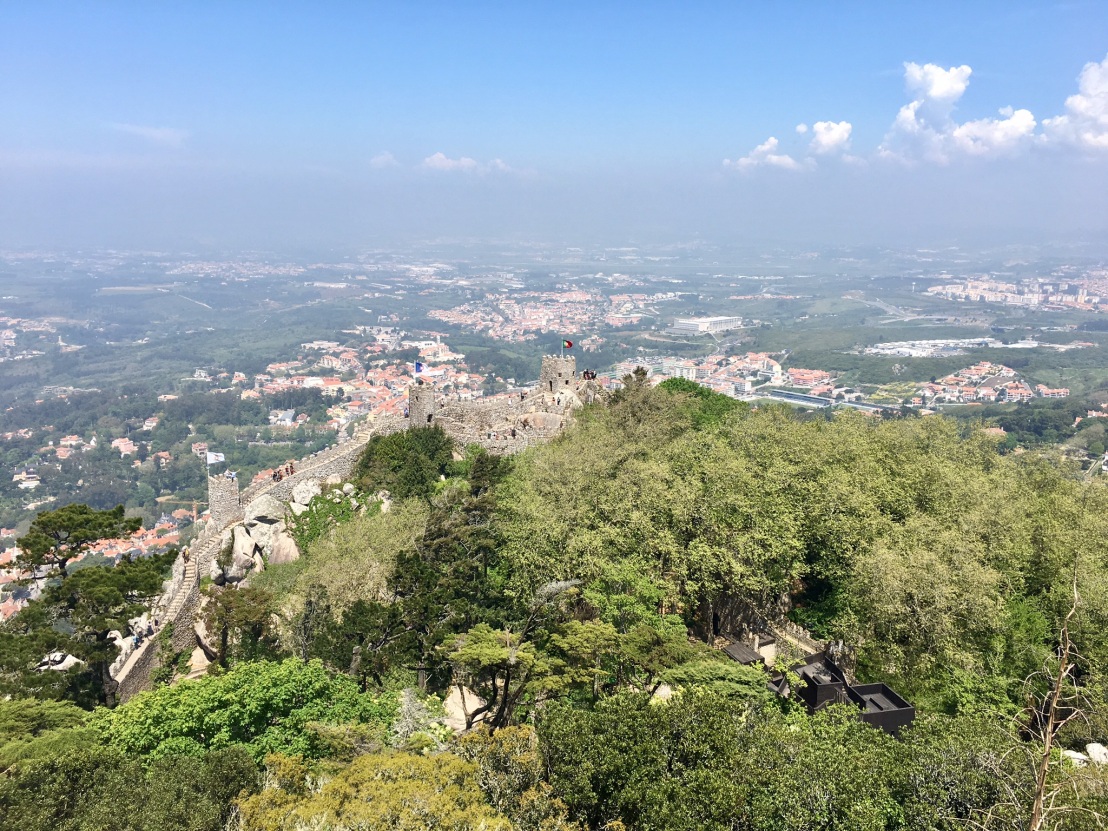 There are beautiful trees there now, but back in the day it was cleared out. The formal keep is further inside, to the north, and the stables and other buildings are scattered around the edges. The castle is essentially a 450 meter (about 500 yards) perimeter situated atop and within the mountainous cliffs. 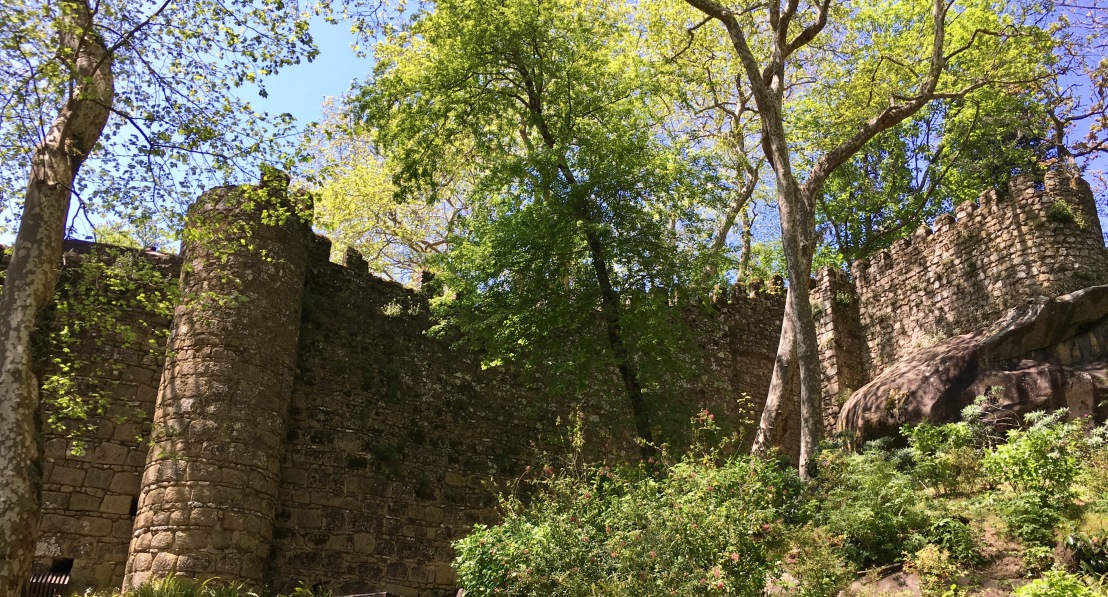 This is a view from the outside. It took us about a half an hour to make it up the hill this far, and there was a lot of huffing and puffing. I can only imagine soldiers back then with all their armor and weapons. Significantly heavier than my iPhone and a water bottle. 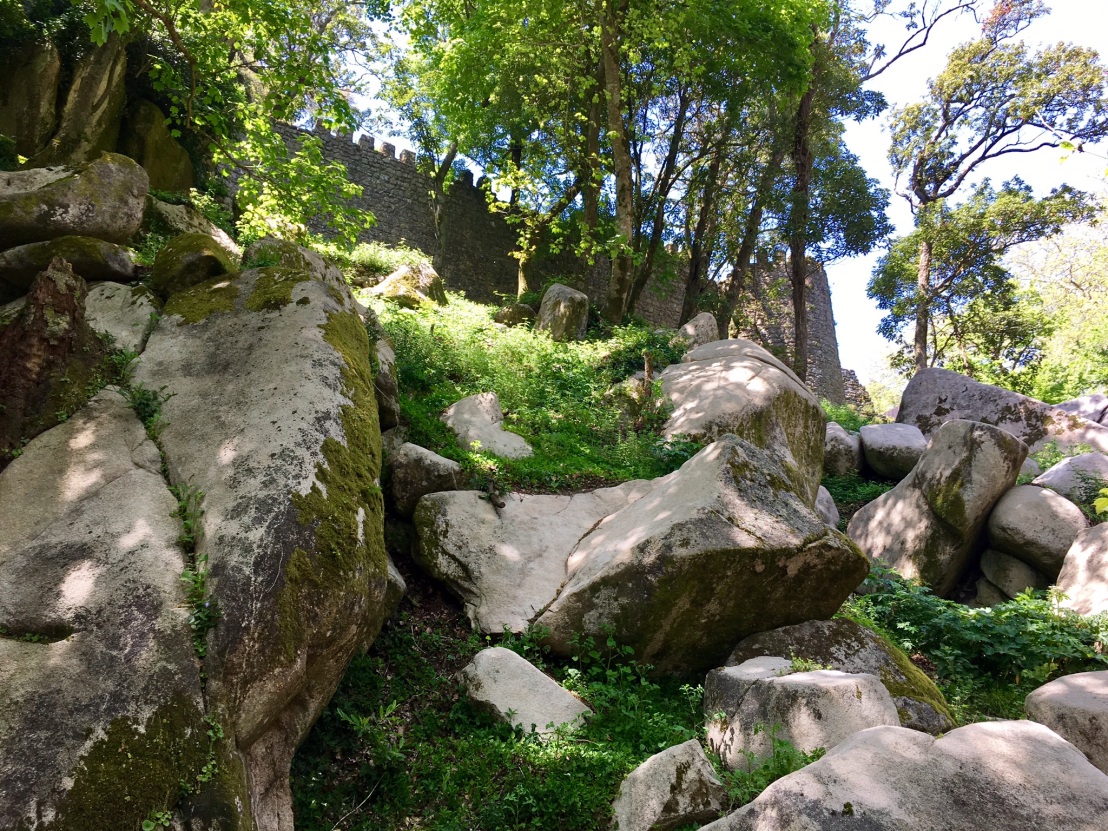 Not to mention, imagine coming all this way to attack and then being confronted with these massive boulders and cliffs (above). You could forget getting any siege engines up here. 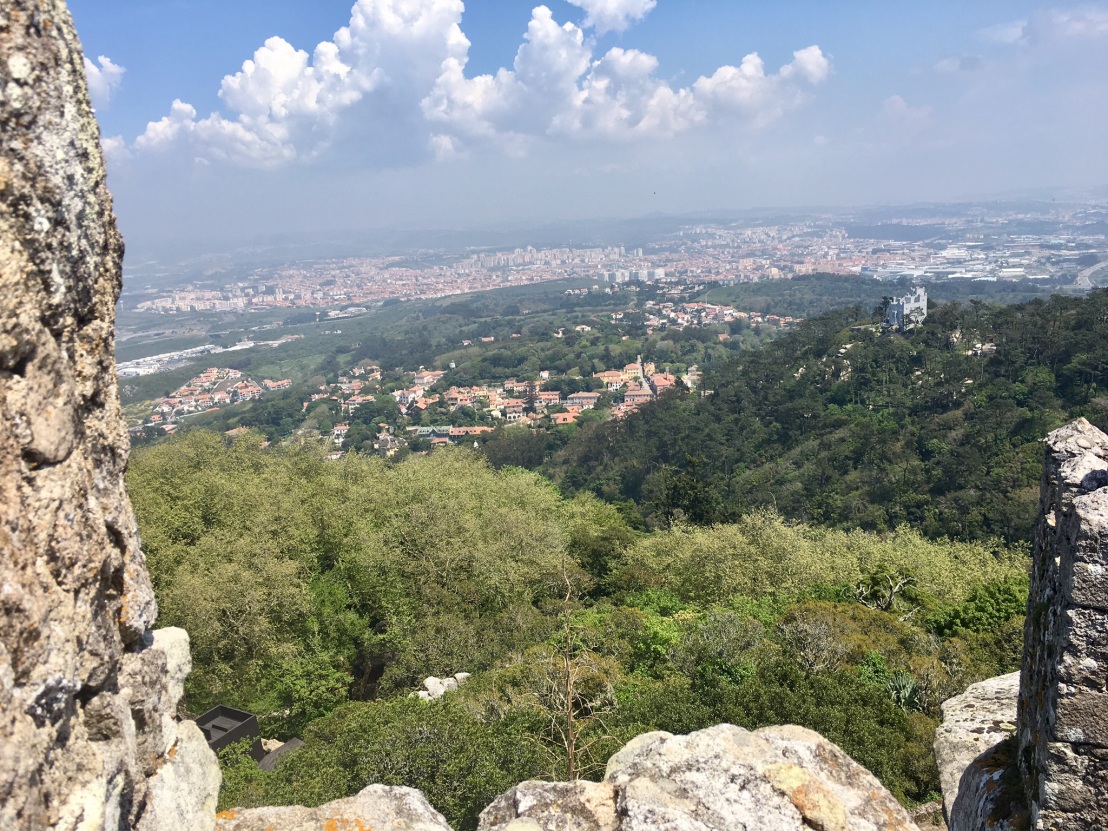 And the views from up here are just spectacular! Well worth the climb up. Almost in the center, at the bottom of the mountain is the cute town of Sintra. Over to the right, up on the hill is yet another palace. It isn’t the Palace of Pena. I tried to find it on maps but it isn’t marked. Like I said before, palaces and castles dot the horizon everywhere you look.

So, yeah, it was a great day adventuring up in the mountains of Sintra. Climbing, hanging out of windows and towers taking pictures while trying not to drop my phone. More climbing up the towers. But then came the dilemma of how we get back down the mountain. Interconnecting bus routes (slow, hot, crowded, time consuming). We could walk back down (LOL LOL LOL). Or we could rent a car with a driver. It was a short discussion. 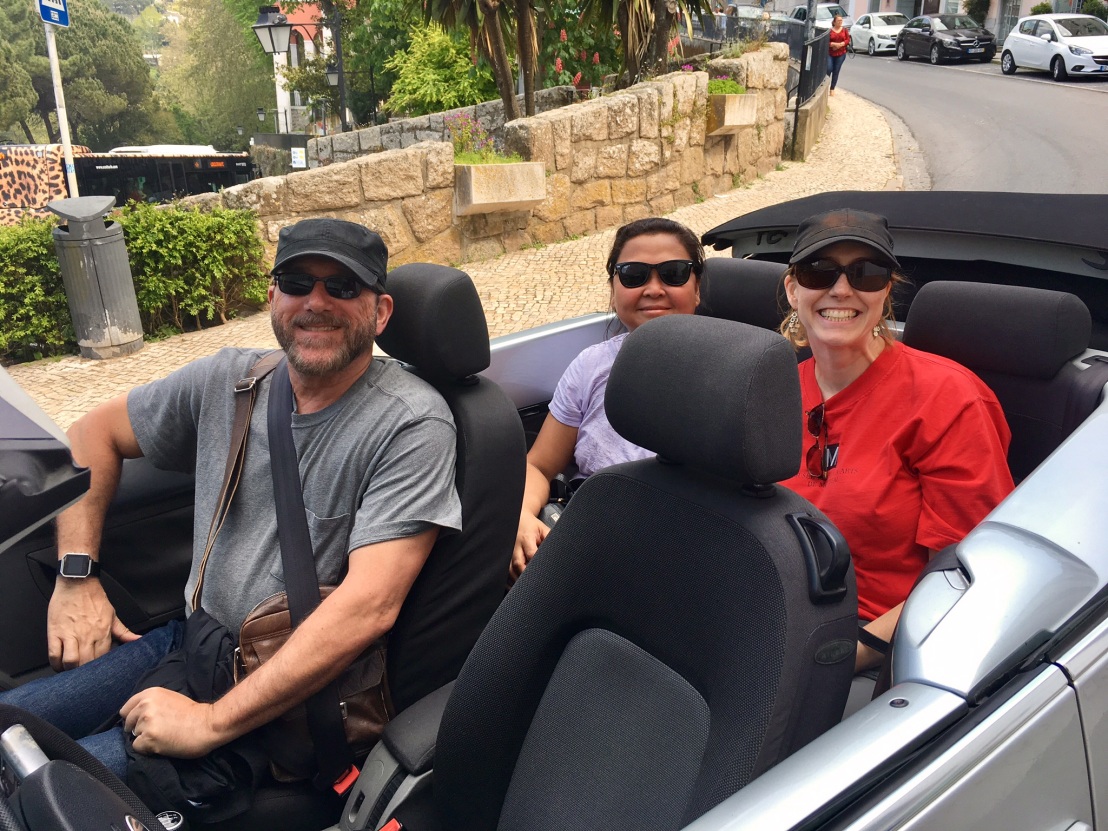