We met up with our friend, Marie, in Lisbon, the capital city of Portugal. Our time in Lisbon, including a fantastic day-trip out to the Sintra mountains is documented in previous articles.

After touring in and around Lisbon for a couple of days, we relocated to Porto via a three hour train ride. The above picture was some of the tiled artwork inside the train station at Porto. Just amazing. A small example of the culture of Porto.

While in Porto, we ate at some great restaurants, took a magnificent food tour, and took in the beautiful city. We even went to a Port wine tasting. While we really enjoyed our stay in Lisbon, there was something about Porto that appealed to us more.

We also did two separate day-trips. One was out into the unbelievably beautiful vineyards deep in the foothills of Portugal, and the other was out into the less traveled towns of Guimarães and Braga. Both of these excursions are documented in a separate article (or will be soon). 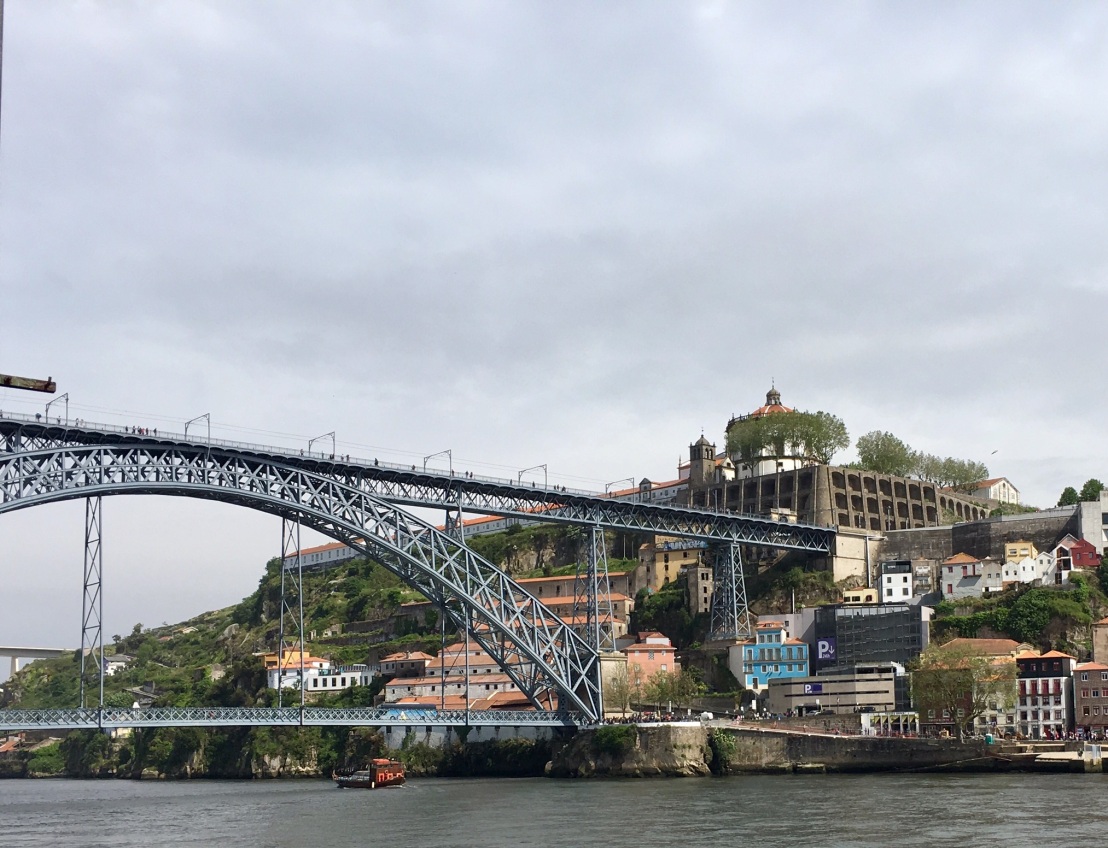 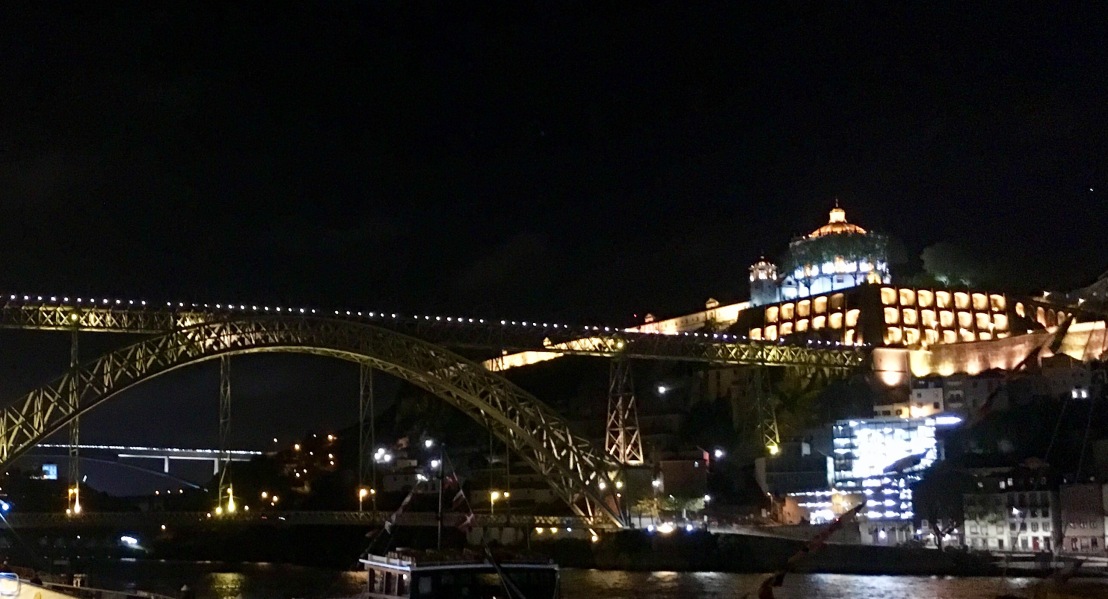 Porto sits literally right on the banks of the Douro river. Like Lisbon, it is a very hilly town, so you may want to hit that stair master a few times before coming out!

The food in Porto, very much like Lisbon, is excellent. We did splurge on one really fancy restaurant while we were there. It was on the top tier, overlooking the city (see above). It was called Yeatman’s. Spectacular views from up there! Great food and drinks as well. 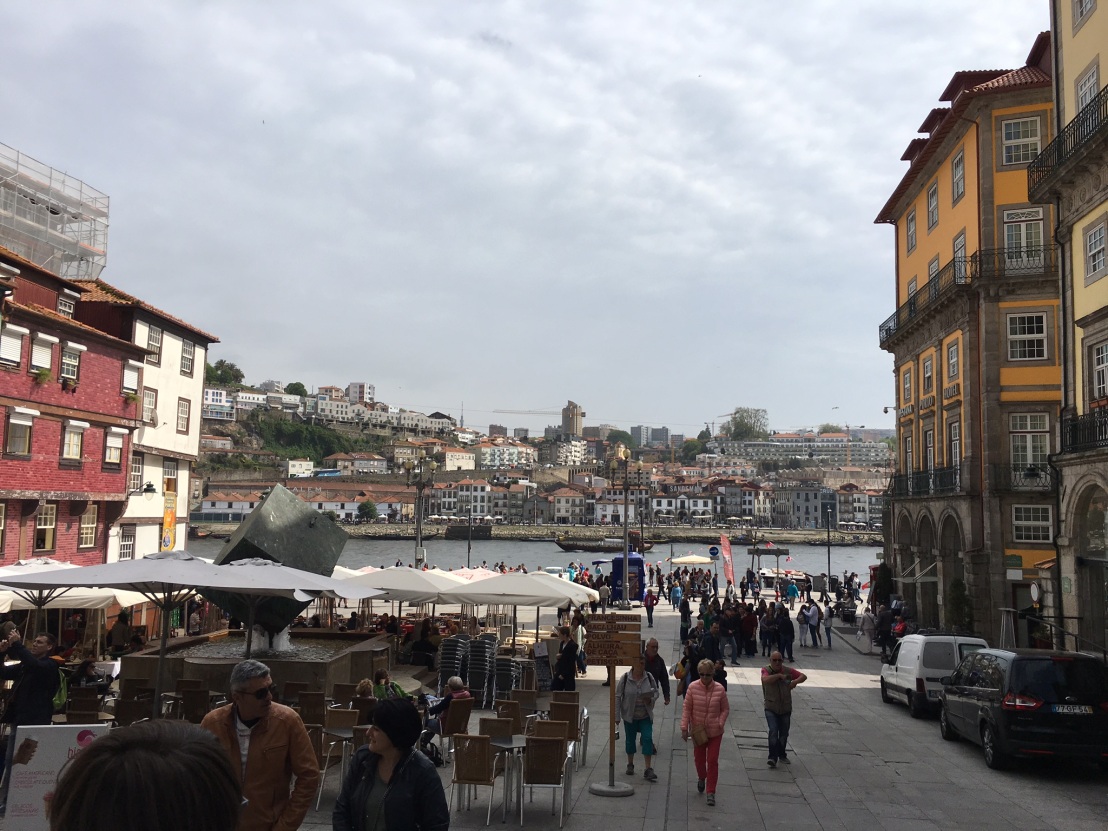 While we’re on the subject, there is a drink they make here that is named after the town itself called Porto Tónico. We noticed that each bar or restaurant had their own version of the drink, and some were better than others. It’s a cocktail made with white port (a fortified wine made from white Douro Valley grapes), tonic water, and usually a citrus garnish, most often a dehydrated orange slice, but this varies by bar. The porto tónico tastes like a cousin of the gin and tonic, but refreshing like an aperol spritzer. Simply delicious and low in alcohol.

There is artwork scattered throughout this creative city. We encountered this giant rabbit during our travels here. I had no idea why it was here, so I looked it up online. It was done by a man who goes by Bordalo II. You can see his signature there on the bottom right. He made this completely out of things he found in the city. And as it turns out, the guy is actually pretty famous. He has also done similar artwork in Paris, Dublin, San Nicolas (Aruba), Tallin (Estonia), and Hamburg. It makes me mad because I have been to some of those places and had no idea. If I had known I would have sought them out. Oh well. But we are planning a tour in Ireland later this year. Maybe we’ll swing by Dublin for a quick photo op! 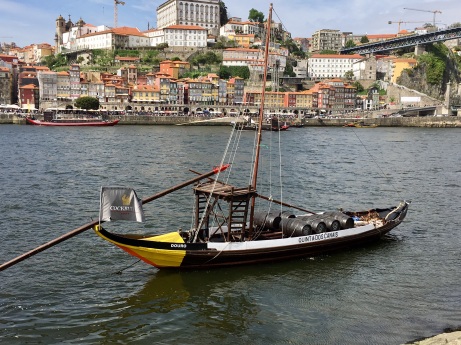 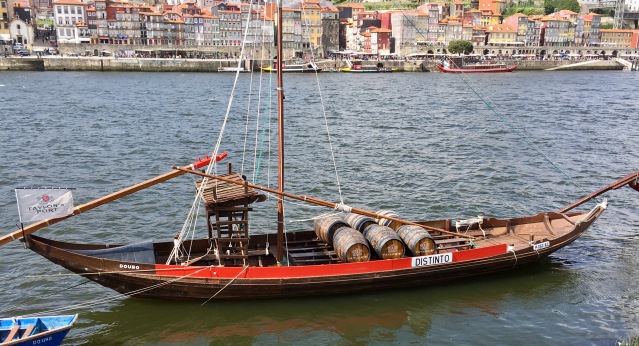 Check these boats out (above). These are called “rabelo” boats. They were used way back in the day before railways to transport the port wine (and people) from vineyards in the Douro Valley. They are unique to Portugal. We rode on one that is similar, but bigger when we visited the Douro Valley. That article will be coming soon.

One of the highlights of our stay in Porto was the walking food (and wine) tour. Jana always says there is no better way to get to know a city than to take a guided walking tour. And the food, she says, is part of the adventure. With a walking food tour, you get to do both of those things at the same time. And if you are lucky enough to get a really good, local guide, as we did, you will not only experience the food, but you will go where the locals go to get it. We enlisted Porto Walkers as our expert local guide to show us around. Our guide, Alex, not only showed us these great food treasures, but also briefed us on the history of the area and of the food itself. It was very enjoyable and educational. 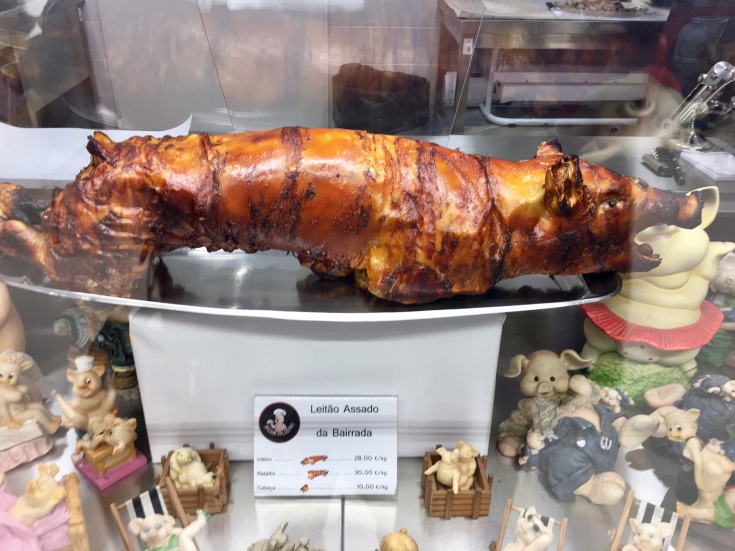 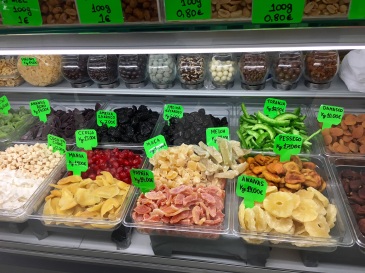 Our first spot was the local marketplace. All manner of fresh fruits, vegetables, meats and breads. Alex took us to several different places within the marketplace where we got to taste some of the loacal snacks, breads, and cheeses.

There is a restaurant within the marketplace that specializes in sausage. They bring it out on this special plate-grill. Unfortunately, the flames didn’t come out well on the iPhone picture, above, but if you look closely you can see them. The fire is coming from the special plate-grill. You turn the sausages yourself, cooking them the way you want them. The one in front isn’t burned, it’s a blood sausage. I’ve never been a big fan of blood sausage, but Alex convinced me to try it, and man it was awesome! It was paired with some great vinho verde. We all enjoyed this so much that we vowed to come back on our own for a sit-down meal here. 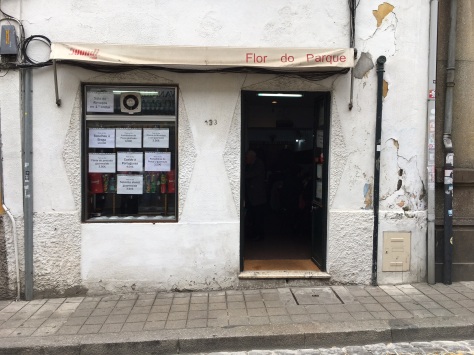 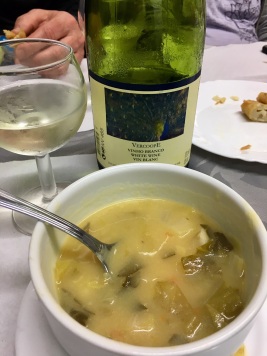 When Alex brought us to this place (above), he asked if this was a place we would have come on our own. Well, we probably wouldn’t have gone in, even if we had been able to find it. Once you step inside, your nostrils are rewarded with the smell of great cooking, and the place was packed with locals. We got some very traditional Portuguese dishes here and some refreshing vinho verde. 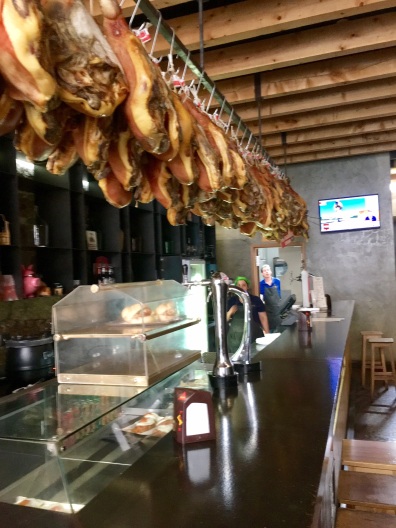 They love the pork in Porto. I should say they love the pig, all of it; that plate on the left has two treats on it. One is pig’s ear, the other is pig’s intestines! Um, ok, a little too fancy for my palate, but no one leaves this place hungry…

They also brought out the traditional ham and cheese sandwiches, YUM, and some fish sandwiches. And a nice glass of espadal to top it off – fantastic. And uh, for the record, Jana did eat some of the pig’s ear which she said was great, but she passed on the intestines. I find that surprising, considering she ate some haggis while we were in Scotland. 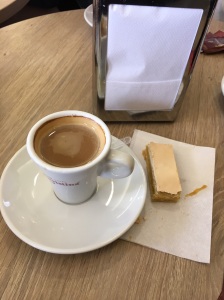 We stopped at a cute little side cafe for some espresso. I am a big fan of espresso, I just love the flavor of it. In Porto (and Lisbon), they add just a spot of milk to the top of the espresso. It’s called ‘uma bica’, and even though it’s just a drop of milk, it really smoothes out the espresso. I drank it that way the rest of our stay. 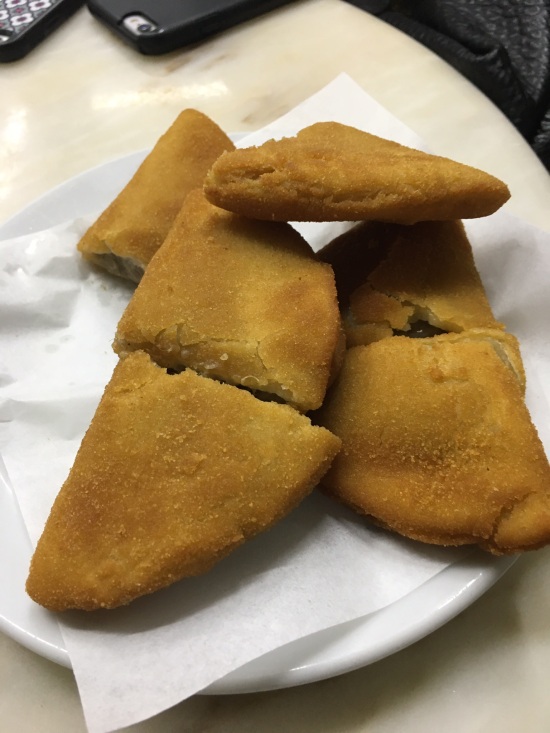 Every place we went on this tour was delicious and entertaining. The food was the very best of Porto. The cod cakes (above) literally just melt in your mouth. And there were three or four places where we got to try out some of the port wines.

There was this one place we went to where we all just sitting there, enjoying our food and drink when, suddenly, one of the waitresses just busted out into song! It was fabulous and completely unexpected.

And of course, what food tour anywhere in the country would be complete without a taste of Pastel de Nata!? We watched as they made them right in front of us got ours right out of the oven. Exquisite!

I could just go on and on about all the things we did in Porto. Be sure to check for ‘Portugal’ under the ‘Destinations’ button on the web site to see other places we went while in Portugal. I do still have a couple of more articles coming in for Portugal, so be sure to follow me on the site so that you will get notified when these stories are published. It was a wonderful, magical place to be. We really enjoyed our stay and will probably be going back with some other friends as part of a riverboat wine tour that begins and ends in Porto. That’s gonna be awesome!!